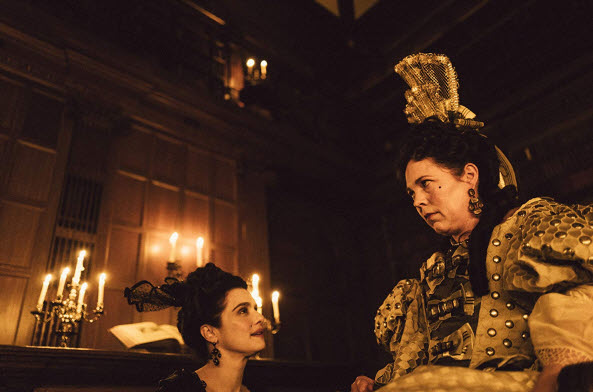 Yorgos Lanthimos’ latest film “The Favourite”, which received the Grand Jury Prize at the Venice International Film Festival in last year, is a delightfully edgy period comedy drama film to be savored. While it is relatively less dark and bizarre compared to his previous films such as “Dogtooth” (2009) and “The Lobster” (2015), the movie gives us a fair share of darkly comic moments as observing the shifting power dynamics among its three main characters, and we are constantly entertained by that.

The story of the movie is mainly set in the palace of Queen Anne of England (Olivia Colman), 1708. While Britain is being at war with France at present, the Queen does not show much interest in governing her country as frequently suffering from her seriously fragile health condition, and she has mostly depended on Sarah Churchill (Rachel Weisz), who has been her close friend and adviser for many years. With the support from the current Prime Minister Sidney Godolphin (James Smith), Sarah has virtually acted as the power behind the throne, and the Queen is fine with that while mostly occupied with taking care of her 17 pet rabbits, which are respectively named after 17 children she unfortunately lost over the years.

However, Sarah’s relationship with the Queen becomes destabilized after her penniless cousin Abigail Hill (Emma Stone) comes to the palace for getting any help from Sarah. Abigail is initially hired as a scullery maid, but then she comes to draw the Queen’s attention after alleviating the chronic pain in the Queen’s leg via her herbal remedy, and it does not take much time for her to gain more favor from the Queen.

At first, Sarah does not mind this change much, and she even promotes Abigail while getting closer to her more than before, but then she comes to realize how much her position becomes threatened by her cousin’s growing status in the palace. When she lets Abigail spend more time with the Queen because she is busy with handling government affairs with Godolphin, Abigail actively uses this opportunity for her own benefit, and the Queen is happy to have another secret lover besides Sarah.

Of course, the situation becomes more complicated as Sarah and Abigail’s power struggle gets mixed up with the political circumstance outside the palace. When Robert Harley (Nicholas Hoult), a prominent parliament member who usually clashes with Godolphin and Sarah, approaches to Abigail for getting any inside information on whatever Godolphin and Sarah are planning to do, she initially hesitates, but then she agrees to make an alliance with Harley once she sees that he can be useful for her. When Sarah becomes more determined to get rid of her as soon as possible, she retaliates in a rather nasty way, and that accordingly leads to a major narrative turn later in the story.

As marching toward its inevitable finale step by step, the screenplay by Deborah Davis and Tony McNamara, which is loosely based on the real-life rivalry between Churchill and Hill over Queen Anne, gives us plenty of wonderfully funny moments. There is a hilarious moment when Abigail happens to witness a very private time between Sarah and the Queen and then tries to sneak away from the spot without getting noticed, and then there is an uproarious moment involved with Sarah and Abigail’s occasional shooting time outside the palace. The dialogues in the film are precisely delivered with dark wit and humor to be appreciated, and I particularly like a brief scene later in the film where Sarah and Abigail express their mutual hate to each other while still maintaining their prim appearance.

The movie is also quite impressive in technical aspects. Thanks to the production design by Fiona Crombie and Alice Felton and the costumes by Sandy Powell, the movie is filled with authentic period atmosphere, which is enhanced further by the soundtrack consisting of various pieces of music ranging from J.S. Bach and Franz Schubert to Elton John and Olivier Messiaen. The cinematography by Robbie Ryan is fluid and dynamic, and his frequent use of wide-angle lens throughout the film emphasizes the sense of insulation and isolation surrounding the main characters in the film.

Above all, the movie is supported well by its three main performers, who indubitably give three of the most enjoyable movie performances of 2018 and will surely be Oscar-nominated together in next week. While Olivia Colman, who received the Volpi Cup for Best Actress at the Venice International Film Festival in last year, ably holds the ground as a capricious but lonely woman who is often overwhelmed by her regal position, Emma Stone and Rachel Weisz deftly handle each own moments with gusto, and it is really fun to watch how these talented actresses push or pull each other on the screen. In case of other notable performers in the film, Joe Alwyn, Mark Gatiss, James Smith, and Nicholas Hoult fill their respective supporting roles as required, and Hoult has a couple of small juicy scenes as casually wielding his character’s vicious side.

After impressing me and others a lot with that odd and chilly domestic drama of “Dogtooth”, Lanthimos has advanced further with “The Lobster” and “The Killing of a Sacred Deer” (2017), and “The Favourite” fully confirms to me his status as a master filmmaker who is not afraid of trying something new. He and his cast and crew bring a considerable amount of fresh air into their genre territory, and the result is quite entertaining while also being one of the funniest films of 2018. In short, this is indeed something you should not miss.