“Vice”, which is intends to give us a funny, scathing look into Dick Cheney’s life and career, turns out to be middling at best and plodding at worst. While it is at least anchored by one of the most committed movie performances of last year, the movie is also seriously marred by its scattershot narrative and superficial characterization, and the overall result is disappointing as it does not provide much insight on a man who has been regarded as one of the most notorious vice presidents in the American history.

The first half of the movie mainly focuses on how Cheney (Christian Bale) gradually rose in the political world of Washington D.C. during the 1960-80s. While there was a time when he seemed to be destined to the life of a useless drunk in Wyoming, he eventually came to his senses thanks to his wife Lynne (Amy Adams), and, after several years, he begins to work as a White House intern under Donald Rumsfeld (Steve Carell), who was US President Richard Nixon’s economic advisor at that time. As Rumsfeld eagerly shows him how things work in Washington D.C., Cheney quickly adapts himself to its political system, but their good time does not last long as they are subsequently pushed away from the White House a few years later.

When Gerald Ford (Bill Camp) becomes the new US president after Nixon’s disgraceful resignation due to the Watergate scandal, Cheney instinctively sees a breakthrough for his political career, and he soon becomes White House Chief of Staff while Rumsfeld becomes the Secretary of Defense, but then they come across another setback when Ford fails to get re-elected. After that, Cheney tries to be a representative for Wyoming, and, despite his serious heart condition, he manages to win the election and then gets another boost for his political career as the presidency of Ronald Reagan begins.

As busily hopping from one narrative point to another, the screenplay by director/writer Adam McKay hurls many pieces of information to us. We come to learn a bit about the Unitary executive theory, which interests Cheney a lot because it can technically allow the US President to wield his power without any intervention from the Congress or the Department of Justice. We get to know more about Cheney’s heart condition, which gets worse due to the following several incidents of minor heart attacks. And we also see when his daughter Mary (Alison Pill) tearfully reveals her homosexuality to him and his wife.

Sadly, these and other elements in the film do not stick well together even though McKay tries very hard to draw our attention. As frequently breaking its fourth wall via its fictional narrator played by Jesse Plemons, the movie hurls numerous moments of absurd satire, but many of them do not work as well as intended, and we do not get much entertainment while only left with the vague understanding of Cheney’s political rise.

During its second half, which mostly revolves around Cheney’s vice presidency under George W. Bush (Sam Rockwell), the movie becomes a little more interesting as observing how Cheney successfully manipulated Bush to get more power for him and then abused his considerable political power and influence to the detriment of not only his country but also the world outside, but then it comes to lose its focus again while busily presenting many incidents including that infamous one associated with Scooter Libby (Justin Kirk), and it eventually fizzles around the finale involved with Cheney’s heart transplant surgery in 2012.

At least, McKay assembled a group of talented performers, and they manage to make the movie watchable to some degrees. Christian Bale, who previously collaborated with McKay in “The Big Short” (2015), immerses himself into his character while mostly unrecognizable in heavy make-up, gives a subdued but effective performance which slowly reveals his character’s intense ambition, and it is a shame that his impeccable performance, which will definitely be Oscar-nominated on next Tuesday, is not supported well by the movie. While Amy Adams, who already appeared along with Bale in “American Hustle” (2013), is also commendable as Cheney’s politically savvy wife, Steve Carell and Sam Rockwell somehow bring some humanity to their broad supporting roles, and the other notable performers including Alison Pill, Lily Rabe, Jesse Plemons, Tyler Perry, LisaGay Hamilton, Justin Kirk, Eddie Marsan, Bill Camp, Shea Whingham, Alfred Molina, and Naomi Watts fill their thankless roles as demanded, though most of them are under-utilized on the whole.

As trying to do too much during its 132-minute running time, “Vice” ends up becoming a shallow misfire which does not achieve much in the end, and it is a major letdown compared to McKay’s previous work “The Big Short”, for which he deservedly won Best Adapted Screenplay Oscar. Although I enjoyed the efforts from Bale and other main cast members of the film, I was also distracted a lot by its many glaring flaws including its deficient screenplay, and I became distant to its story and characters with growing disappointment.

By the way, during my viewing, I could help but think of Paolo Sorrentino’s “Il Divo” (2008), which did a far better job in comparison. While cheerfully and strikingly satirizing the life and career of a notorious real-life Italian politician as shady and evil as Cheney, that movie works as a very compelling character study, and I still remember well its many memorable moments which delighted and entertained me a lot when I watched it several years ago. To be frank with you, I think you will have a more productive time if you watch that film instead. 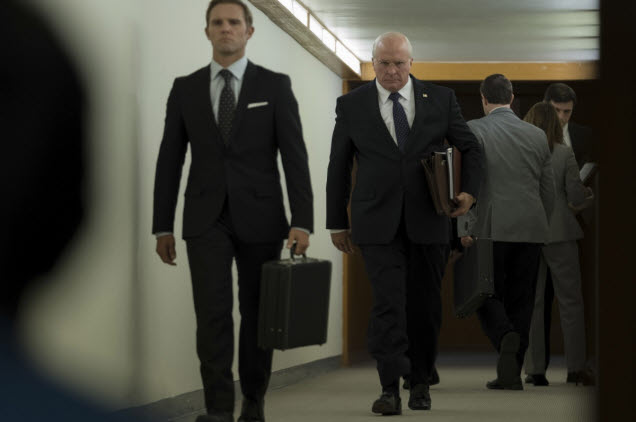