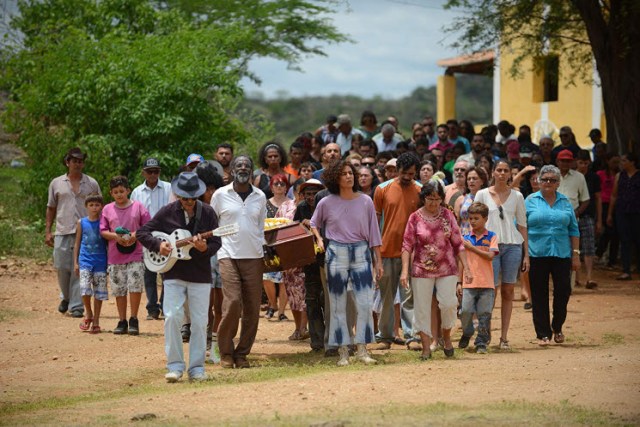 Brazilian film “Bacurau”, which received the Jury Prize along with French film “Les Misérables” (2019) at the Cannes Film Festival early in last year, is an odd mixed bag of genres which did not click that well with me. While there are a number of striking moments as the movie confidently hops among different genres, it often falters in terms of storytelling and characterization, and I often found myself rather distant to its story and characters as often struggling to comprehend what and how it is about.

At the beginning, the movie, which is mainly set in a small village located somewhere in the northeastern rural area of Brazil, notifies to us that its period background is around several years from now, and then it lets us gather how much the village and its residents are isolated from the world outside. While many of them have been stuck in their village for years, their small shabby world is not entirely devoid of modern technology as reflected by the constant supply of electricity to the village, and, to my small amusement, I sometimes noticed some of them using smartphones or tablets.

However, it gradually turns out to us that things have recently gotten worse for the village and its residents. For some unknown reason, their surrounding area has become considerably dangerous, and that aspect is briefly implied by when a young woman sees something quite disturbing on the road while she is returning to the village for attending the upcoming funeral of her 94-year-old grandmother. In addition, there has been serious water shortage in the area, but a local politician who visits the village at one point mostly cares about the upcoming election, and the residents of the village do not even try to hide their contempt toward this scumbag. 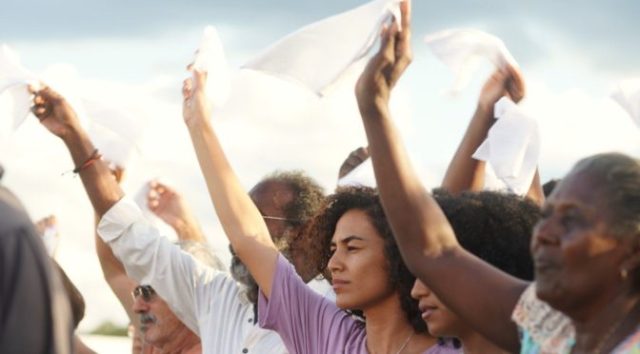 After establishing its rural background, the movie doles out a series of odd moments one by one. During the mourning ceremony for the aforementioned old lady, a local female doctor named Domingas (Sônia Braga) causes a little commotion for an unspecified personal reason, and then there comes a little strange moment of magic realism when the coffin of that old lady is being buried in the ground. I must confess that I have no idea on how I should interpret this moment, but it certainly made me prepared for more weird things to come, and I was not so surprised when a certain object which looks like a flying saucer entered the picture not long after that.

However, that object in question soon turns out to be more mundane than expected, as it belongs to a group of Americans who have a sinister purpose behind their back. As these Americans, led by a guy named Michael (Udo Kier), prepare to strike the village step by step, the villagers come to notice that something strange is going on around them. While their communication lines with the world outside are somehow cut off, an old school teacher is perplexed as he cannot find the location of his village in an online map, and then there comes a gut-wrenching scene at a farm located near the village.

When another disturbing incident subsequently happens at one night, the villagers come to discern that they must defend their village for themselves, and the movie accordingly enters the territory of western films as the villagers subsequently seek help from some young wanted man and his few comrades. Around the narrative point where Michael and other Americans are fully ready for their hunt, the villagers are also quite ready with some surprise behind their back, and what eventually follows is a series of tense moments reminiscent of those action thriller films of John Carpenter. Not so surprisingly, the movie uses a piece of electronic music co-written and performed by Carpenter during one of its highlight scenes, and you may smile a little as noticing the name of the village school. 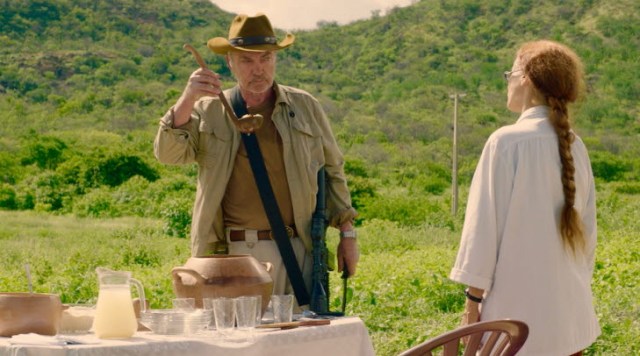 However, despite its numerous demonstrations of confident filmmaking, the movie does not generate enough dramatic momentum to engage me mainly due to its uneven narrative which is also hampered by its rather thin characterization. While I appreciate that the screenplay by Kleber Mendonça Filho, who has been known well for his two previous works “Neighboring Sounds” (2012) and “Aquarius” (2016), and his co-director Jliano Dornelles tries to pay equal attention to its numerous characters, many of them remain to be cardboard figures nonetheless, and I must point out that those American characters in the film do not look that menacing or dangerous in spite of their casual and heartless acts of killing.

Anyway, the cast members of the film, many of whom are non-professional performers, acquit themselves well on the whole as bringing some authenticity to their respective roles, and I especially like how effortlessly Sônia Braga, who previously collaborated with Filho in “Aquarius”, slips into the ensemble without overshadowing others in the film at all. In case of Udo Kier, he is less offbeat than usual, but then he reminds us again of why he has always been a pleasure to watch for many years.

Overall, “Bacurau” does not work as well as intended, and I accordingly felt dissatisfied in the end, but I admire its atmosphere and details nonetheless. After checking out several positive reviews on the film, I came to wonder whether I should re-evaluate it later with more background knowledge, and I guess I will have to give it a chance someday for more appreciation and understanding. 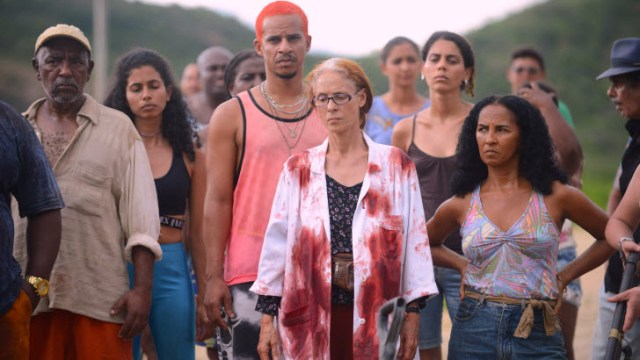 This entry was posted in Movies and tagged Drama, revenge, Village. Bookmark the permalink.