Documentary film “Western Stars”, which is directed by Bruce Springsteen and Thom Zimny, often engaged and impressed me via not only Springsteen’s songs but also wisdom and meditation inside them. As a solid companion piece to his nineteenth album “Western Stars”, the documentary surely delivers a number of superlative musical moments to be savored by many ardent fans of Springsteen out there, and there are also several meditative moments which earnestly bare to us Springsteen’s artistic human spirit, which, as far as I could see from the documentary, has aged pretty well during last five decades.

The setting of the documentary is quite simple. First, the camera looks around the interior of an old big barn located in Springsteen’s farm in New Jersey, which, according to Springsteen, was built more than 100 years ago. Although it is apparently renovated a lot, the barn still looks antique with the palpable sense of old history, and its wooden environment provides an ideal acoustic condition for performing and recording the songs of “Western Stars” in front of a small group of guests invited to this private event.

We soon see Springsteen performing along with a bunch of musicians including his wife Patti Scialfa, who has performed along with him as a member of his band since 1984. I must confess that I am not that familiar with the music Springsteen besides a few songs of his including that haunting Oscar-winning song for “Philadelphia” (1993), but it did not take much time for my mind to become absorbed in his calm but compassionate rendering of several first songs including “The Wayfarer” and “Tucson Train”.

These and other songs from his album are intercut with the somber scenes where Springsteen talks about the inspiration behind them. In his view, the American life is a constant balancing act between individuality and togetherness which is usually accompanied with small and big mistakes to live with, and he reflects on how he often hurt himself as well as others dear to him throughout his life and career. Although he does not specify his faults and mistakes that much, Springsteen’s face and voice at present are more than enough to convey to us his lifelong wisdom coupled with some pain and regret, which was probably the main source of inspiration for that poignant titular song of Darren Aronofsky’s “The Wrestler” (2008).

Springsteen’s reflective moments in the documentary are often accompanied with the beautiful shots of wide landscapes, which not only enhance the content of his musings but also accentuate the stories conveyed through his songs. In “Western Stars”, it tells us the story of a fading western film star struggling to keep going everyday, and Springsteen phlegmatically but passionately delivers the mix of resignation and stubbornness. In case of “Drive Fast (The Stuntman)”, it is about a veteran stuntman who cannot settle himself easily even when he finds someone to love, and it is certainly one of several highlights in the documentary.

Although many of these and other songs in the documentary are usually about folks who are rather alien to me for understandable reasons (I am a South Korean guy with a very different life background, you know), they somehow generated some emotional resonation inside me, probably because I made a bitter personal decision a few days ago. I felt bad as worrying over whether I will have to live with the emotional ramification of that hard decision for the rest of my life, but some of Springsteen’s songs in the documentary consoled me to some degree, and I came to feel a bit better than before, while also accepting the disastrous consequence of that decision as another hard lesson in my crummy and inconsequential life. To be frank with you, I think I understand now more of how much Springsteen’s music means to the young hero of Gurinder Chadha’s overlooked comedy drama film “Blinded by the Light” (2019). 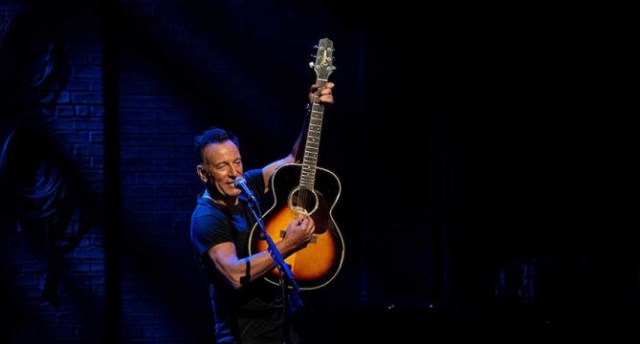 During its second half, the documentary becomes relatively more spirited as Springsteen and other musicians perform “There Goes My Miracle”, and he surely shows that he still can be vigorous and magnetic although he had his 70th birthday in last year. He and Zimny did a commendable job of presenting this and several other highlight moments on the screen with enough spirit and verisimilitude, and Springsteen never disappoints us whenever the camera closely focuses on him during his performance.

Although I must point out that the documentary does not give us much background information on his life and career, Springsteen’s humanity and artistry are clearly shown and felt from his unpretentious appearance. During my viewing, he looked to me like the last guy to leave just for hanging around with others more, and that is why I was quite amused as watching the final scene of the documentary, which shows Springsteen spending a little private time with his wife at the barn after almost everyone left.

In conclusion, “Western Stars” is a humble but admirable presentation of the latest songs from Springsteen, who is currently working on his next album to be recorded. I was a bit disappointed that the documentary does not go beyond my vague knowledge on Springsteen, but it did its job as much as intended while giving me good moments to be appreciated, and I am certainly grateful to it for making me less depressed than before. 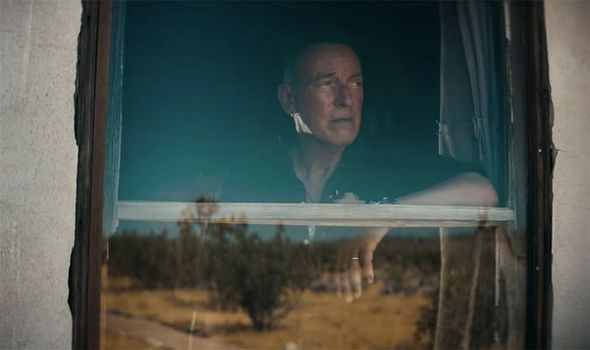 This entry was posted in Movies and tagged Concert, Documentary, Musician, Real-life figure. Bookmark the permalink.