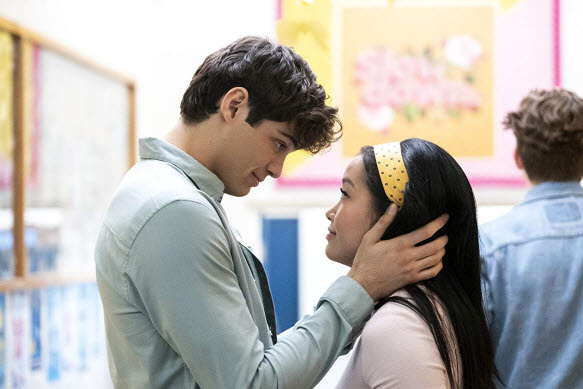 Netflix film “To All the Boys: P.S. I Still Love You”, which is a sequel to “To All the Boys I’ve Loved Before” (2018), is a middling second chapter which feels rather flat and pedestrian compared to its predecessor. Although it is not wholly devoid of charm and spirit thanks to its solid cast, the movie is often disappointing as merely trudging along its predictable plot without bringing anything new or fresh to the story, and I must confess that I often found myself bored and impatient when I watched it in this morning.

The story begins at the point not long after the finale of “To All the Boys I’ve Loved Before”. After going through several ups and downs in the previous film, our high schooler heroine Lara Jean (Lana Condor) eventually begins a really serious romantic relationship with Peter (Noah Centineo), and the opening scene shows us how much she is excited about her first official date with him. When he finally comes to her family house, her father and her younger sister sincerely wish a good luck to them, and they surely have a nice time at a posh restaurant as playfully reminding each other of how much they love each other.

However, of course, there later comes a trouble into Lara Jean’s life. If you have seen the previous film, you surely know that Lara Jean’s younger sister sent Lara Jean’s old love letters to five boys including Peter, and one of the other four recipients besides Peter turns out to be quite interested in getting closer to Lara Jean. When she unexpectedly receives the letter from John Ambrose (Jordan Fisher), Lara Jean is certainly surprised, and then she becomes quite conflicted because, well, she comes to see that she still has some old feeling toward him.

Not so surprisingly, the situation becomes more complicated when Lara Jean goes to a nursing home for her volunteer work and then encounters John Ambrose, who also comes to the nursing home for the same purpose. This accidental encounter of theirs feels pretty awkward to both of them right from the beginning, but they soon find themselves more attracted to each other as working and spending time together, and that certainly leads to more conflict for Lara Jean, who has not told everything to Peter yet.

While keeping hesitating between Peter and John Ambrose, Lara Jean comes to have more doubts on her current relationship with Peter mainly because he often fails to show her enough consideration and affection. When he later comes to know about what is going on between her and John Ambrose, he is surely not so pleased about that even though he was once close to John Ambrose, and that accordingly puts more distance between him and Lara Jean.

Now many of you get a pretty good idea on where the story is heading, and I assure you that you will not be surprised much. As becoming more distant to Peter, Lara Jean comes to wonder whether he still has some feeling toward his ex-girlfriend who was incidentally her best friend in the past, and that consequently pushes her toward more to John Ambrose. Although their interactions are not totally free of awkwardness, Lara Jean begins to consider beginning a relationship with him, and then she happens to see a photograph suggesting something serious going on between Peter and his ex-girlfriend.

Around that narrative point, the screenplay by Sofia Alvarez and J. Mills Goodloe, which is based on “P.S. I Still Love You” by Jenny Han, throws more predictable moments, and the movie consequently loses its narrative momentum during its third act. Although we get some amusement from how Lara Jean’s younger sister attempts a matchmaking between their dad and a certain neighbor, that subplot remains underdeveloped on the whole. In case of a little poignant moment between Lara Jean and Peter’s ex-girlfriend later in the story, it comes too late in my humble opinion, and we are not so surprised at all because we have already discerned a misunderstanding between them.

Anyway, the movie is still mildly entertaining thanks to the likable lead performance from Lara Condor, who demonstrates here again that she is a promising actress with considerable talent and presence. In addition to conveying well to us her character’s growing conflict and confusion, Condor handles well a number of comic moments in the film, and she is particularly funny and charming during the opening scene as fully embracing her character’s irrepressible bliss. To be frank with you, I hope she will soon move onto better things after this film and the following sequel “To All the Boys: Always and Forever, Lara Jean” (2020), which will be released on Netflix several months later.

In case of the other main cast members of the film, they are mostly stuck in their functional roles. While Noach Centineo and Jordan Fisher are suitably cast as two handsome boys around our heroine, they do not have many things to do except looking desirable, and the other substantial supporting performers including Anna Cathcart, Ross Butler, Madeleine Arthur, Emilija Baranac, Trezzo Mahoro, Holland Taylor, and John Corbett are sadly under-utilized, though they try as much as they can for bringing some life and personality to their respective roles.

In conclusion, “To All the Boys: P.S. I Still Love You” is a fairly passable product, but it did not engage me enough for recommendation, though I must say that director/cinematographer Michael Fimognari did an adequate job in technical aspects. Seriously, I do not have much expectation on “To All the Boys: Always and Forever, Lara Jean” at present, but I wish it will not be more mediocre than this at least.

This entry was posted in Movies and tagged Comedy, High School, Romance. Bookmark the permalink.