I was often baffled and confused as watching “Horse Girl”, which was released on Netflix not long after it was shown at the Sundance Film Festival in last month. As its heroine becomes more mentally disturbed and confused along the story, the film merely moves onto one weird moment to another without generating enough narrative momentum to hold our attention, and we come to remain rather distant to its heroine’s gradual descent into madness during its second half.

At first, everything looks fine and all right for Sarah (Allison Brie), a shy, awkward young woman without much social life. While she has lived with a female roommate around her age, there is not much interaction between her and her roommate, and it seems that her only friend is Joan (Molly Shannon), a kind and generous older woman who has worked with her at their workplace.

And we get to know about her strong emotional attachment on a horse in a local ranch. For some unspecified reason vaguely implied via a short flashback shot later in the story, Sarah wants to be near that horse as much as possible, and she also approaches to a young girl who routinely comes to the ranch for her riding lesson, though she does not know anything about that young girl at all.

Meanwhile, things get a bit better for Sarah when her roommate suggests that they should have a double date with her boyfriend and one of his friends. Although she prefers to watch her favorite TV drama series alone as usual, Sarah reluctantly agrees to spend some time along with others, and, what do you know, she finds herself having much more fun than expected thanks to music, dance, and, yes, alcohol. In addition, she becomes quite attracted to her date, and it looks like the feeling is mutual between them. 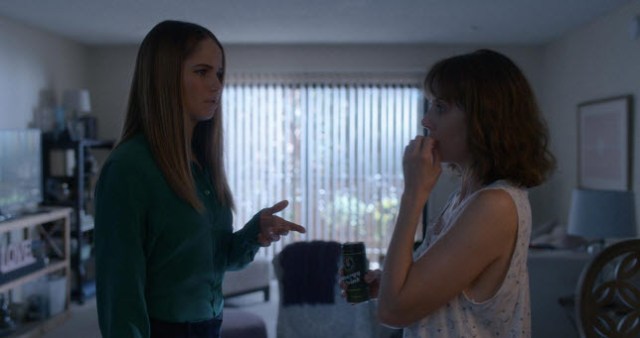 However, strange things begin to happen to Sarah, and she becomes quite unnerved because of that. Besides starting to show the serious cases of sleepwalking and time loss, she frequently dreams of herself being in an alien place along with two unconscious people she has never seen before, and she is surprised when she happens to spot one of these two people during one day.

Like any sensible people, Sarah wonders whether she is going crazy, but those weird things feel so real to her that she comes to believe that there is an insidious conspiracy around her. Just because she resembles her grandmother a lot, she thinks she is actually a clone of her grandmother, and she fears that aliens who made her will take her away sooner or later.

Of course, she surely knows how well preposterous that sounds, but she cannot help but driven by her madness day by day. At one point, she approaches to that man she saw in her dreams, and she attempts to get to know more about him, but that only results in more conflict between her and her roommate, who comes to worry about Sarah more than before. In case of Sarah’s aforementioned date, he is willing to listen and talk with her during their second meeting, but, not so surprisingly, there soon comes a point where he decides that enough is enough.

And the story goes further into more madness and confusion along with its heroine. Although it gives us some respite when Sarah subsequently comes to stay at a mental hospital after a striking moment of mental breakdown, she remains quite unstable and disturbed as before, and we accordingly get a series of strange moments filtered through her increasingly unreliable viewpoint. 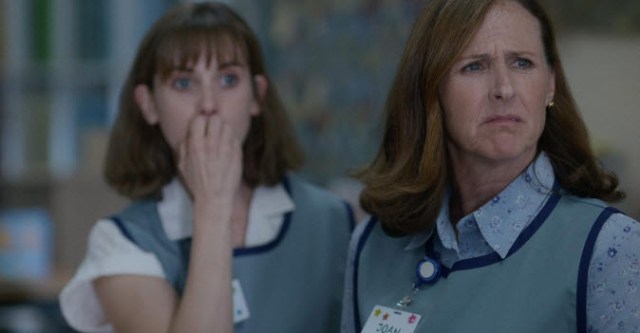 Naturally, we come to wonder more about what really makes Sarah tick, but director/co-writer/co-producer Jeff Baena never gives us any clear answer for that as steadily making us more confused than before. Thanks to cinematographer Sean McElwee, the movie is constantly shrouded in unnerving ambience, and there are a number of visually impressive moments which effectively reflect our heroine’s warped state of mind as accompanied with the unnerving score by Josiah Steinbrick and Jeremy Zuckerman.

Although we still keep getting baffled about what is exactly going on, Alison Brie, who has been known for her notable performances in several acclaimed TV series including “Mad Men”, “Community”, and “GLOW”, gives a good performance which compensates for the weak aspects of the film to some degree. While we do not get to know that much about her character, Brie, who is also the co-writer/co-producer of the movie, did a fine job of conveying to us her character’s deeply troubled state of mind, and she is poignant when her character finally finds her peace of mind during the ambiguous finale.

In contrast, several other notable performers in the movie are rather wasted in their functional roles, and that was a major disappointment for me. While Molly Shannon is reliable as usual, she is mostly limited by her thankless role, and the same thing can be said about Jay Duplass, David Paymer, and Paul Reiser, who merely come and then go during their respective brief appearances.

On the whole, I cannot recommend “Horse Girl” due to its several flaws, but I admire what Baena and Brie, who previously worked together in Baena’s previous film “The Little Hours” (2017), attempt to present on the screen. Although their overall result is not as successful as intended in my trivial opinion, the movie shows their considerable talent nonetheless, and I hope they will soon move onto better things in the future.

This entry was posted in Movies and tagged Mental Illness. Bookmark the permalink.