“The Heiresses”, which was selected as Paraguay’s entry for Best Foreign Language Film Oscar at the 2019 Academy Awards in last year, is a small but impressive drama about a plain middle-aged woman happening to struggle alone during the absence of her longtime companion. While there are several gloomy moments of sadness and melancholy as we watch her isolated world crumbling bit by bit, the movie also closely observes how she tentatively steps out of her hermetic life, and it is quietly touching when she eventually becomes a lot more active than before.

In the beginning, the movie slowly establishes the deteriorating financial circumstance of Chela (Ana Brun) and her longtime companion Chiquita (Margarita Irún), who have lived together for many years in Chela’s big family residence located somewhere in Asunción. As reflected by the title of the film, there was a time when they were rich and affluent, but now they have mostly depended on selling paintings, furnitures, and other expensive items in Chela’s residence, and the opening scene shows two potential buyers looking for anything to buy as Chela watches them from the distance.

While observing the daily life of Chela and Chiquita, we get to know a bit more about how their longtime relationship have worked. While Chela mostly sticks to her daily routine within her residence, Chiquita is the one who has taken care of many things including their financial matters, and it is soon revealed to us that she is going to be imprisoned for several months at least due to some financial fraud involved with their debt. Chiquita remains calm and resigned about that, but Chela is understandably concerned about how she will live alone without Chiquita. They have a maid who was recently hired, but Pati (Nilda Gonzalez) is not so reliable to say the least, and, to Chela’s frustration, she does not handle daily tasks as well as Chiquita.

Anyway, Chela has no choice but to keep on alone while routinely visiting Chiquita at the prison. Her close friend Carmela (Margarita Irún) is willing to help as much as she can, but Chela does not want that because of her remaining pride and dignity, which she has to suppress whenever potential buyers come to her residence. While she refuses to sell a certain piece of furniture at a lower price at one point, that furniture is eventually sold later and then replaced with a smaller and tackier one, and she also has to sell an antique musical instrument which seems quite precious to her as shown from a brief moment.

Meanwhile, there comes an unexpected chance to earn extra money via Pituca (María Martins), an old lady who is one of Chela’s close neighbors. When she asks Chela whether Chela can drive her to a routine card game meeting, Chela reluctantly accepts Pituca’s request mainly because she does not want Pituca to delve more into her ongoing domestic difficulties, and she soon finds herself becoming a de facto driver for not only Pituca but also other old ladies in that card game meeting. She initially does not accept the money given to her for her service, but she comes to swallow her pride and dignity in the end, and the movie subtly accentuates her downgraded status, especially when it shows her waiting alone outside a drawing room where that card game meeting is being held.

As continuing to drive for Pituca and other old ladies, Chela encounters a young woman named Angy (Ana Ivanova). While spending more time with her, Chela cannot help but drawn to this spirited lass who is quite different from her in many aspects. Although she does not smoke, she allows herself to smoke a bit when Angy offers a cigarette, and she also tries to wear sunglasses for looking a little more glamorous. As days go by, she feels more of the growing wish and desire in her heart, and there later comes a point where she attempts to get a little closer to Angy not long after she confides to Chela on her rather flexible sexuality. 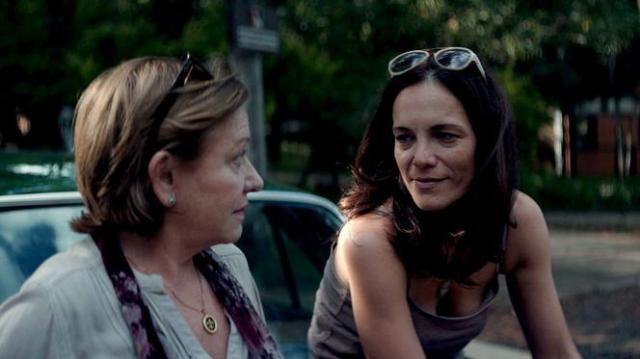 While fluidly moving from one episodic moment to another, the movie works as an intimate female character study, and director/writer Marcelo Martinessi did a skillful job of conveying to us Chela’s limited and isolated status throughout his film. As the widescreen of 2.35:1 ratio emphasizes the sense of confinement surrounding her, cinematographer Luis Armando Arteaga’s camera usually sticks around Chela and a few other substantial characters in the story, and we come to get ourselves more immersed in their small, quiet world, which makes a big contrast with the busy and lively mood of several prison scenes in the film.

Martinessi also draws excellent performances from his main cast members. Ana Brun and Margarita Irún are believable right from their first scene, and Brun, who deservedly received the Silver Bear award for Best Actress at the Berlin International Film Festival early in last year, is terrific particularly when she silently handles her character’s anxious feelings during a number of key scenes in the movie. While Irún gets some juicy moments during her prison scenes, Ana Ivanova, María Martins, Alicia Guerra, and Nilda Gonzalez are also solid in their respective supporting roles, and I particularly appreciate how Ivanova and Brun deftly handle their characters’ emotional circumstance during their scenes.

“The Heiresses” is the first feature film by Martinessi, who previously made a couple of short films and a documentary short film. Although his achievement here in this movie looks modest on the surface, it surely deserves to be compared with Sebastián Lelio’s “Gloria” (2013) in many aspects including their common feminist touches, and it may be regarded as the starting point of another interesting South American filmmaker to watch.

This entry was posted in Movies and tagged Drama, Heiress, Homosexuality. Bookmark the permalink.