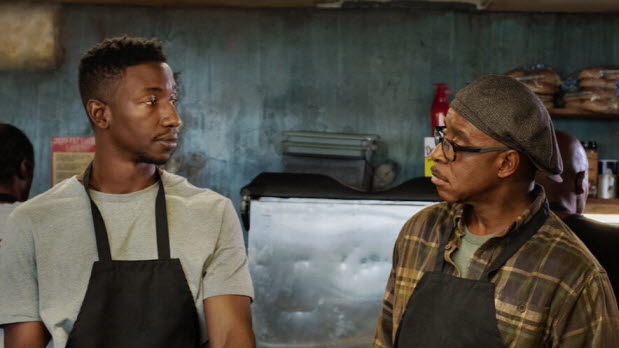 Netflix film “Uncorked” is a mildly pleasant family drama exuding familiar flavors. Although it is rather predictable to the core, the movie manages to distinguish itself a bit thanks to its mood, details, and performances to be savored for a while, and you may come to forgive its shortcomings to some degree even while recognizing them during your viewing.

Mainly set in the African American neighborhood of Memphis, Tennessee, the movie centers on the relationship between Elijah (Mamoudou Athie) and his father Louis (Courtney B. Vance). Since he took over a local barbecue restaurant from his father many years ago, Louis has diligently worked for making the restaurant into one of the most popular spots in his neighborhood, and he has expected his son to succeed him someday, but Elijah has had a different idea on his life and career. As doing a part-time job at a local wine shop in addition to working in his father’s restaurant, Elijah has become quite interested in wines, and he has been aspiring to be a Master Sommelier instead of cooking and serving barbecues.

Understandably, Louis is not so pleased about his son’s growing aspiration. Because he has some reasonable doubt on that, he thinks his son should focus more on working in his restaurant, but, mainly due to his wife Sylvia (Niecy Nash), he does not stop his son when Elijah later announces to him and other family members that he is going to try an entrance exam for the Master Sommelier program.

Once he is allowed to join the Master Sommelier program, Elijah is ready to study as hard as possible, and we subsequently see him and other students eagerly going through their education process. Because only a few of them will be able to become a Master Sommelier in the end, they must know everything about numerous wines around the world, and, above all, they must be able to recognize each one correctly through merely tasting and smelling it. To me, this is really fascinating because, although I have been fond of wine after watching, yes, “Sideways” (2004), I only know the difference between red and white wines without much knowledge on smell and flavor (How the hell do some of them come to have the aroma of smoked meat, I wonder?).

Busily going between study and restaurant work, Elijah often finds himself overwhelmed by how much he needs to study, so he comes to join a study group. While Richie (Gil Ozeri) is constantly nervous just like I was before many examinations during my undergraduate period, a guy nicknamed “Harvard” (Matt McGorry) is more confident in contrast, and he certainly seems to have more chance than his other study group members because of his considerable competitiveness and knowledge.

Meanwhile, Elijah finds himself accidentally falling in love with a nice young woman named Tanya (Sasha Compere), whom he happens to encounter when she comes into the wine shop where he works on one day. Because she does not know that much about wines, Elijah volunteers to give her a quick lecture, and the mutual feeling between them becomes more palpable to us as he explains to her through an analogy between wines and hip-hop. When they meet again later, it does not take much time for them to move onto the next level, and Tanya soon comes to support Elijah’s aspiration sincerely just like his mother.

However, Louis remains distant to his son, and their silent conflict gets worse when Elijah tries to join a Sommelier program in Paris as an exchange student. While Sylvia instantly embarks on gathering enough money for sending Elijah to Paris, Louis merely maintains his usual passive-aggressive attitude, and Elijah naturally feels hurt about the growing estrangement between him and his father.

After that narrative point, the screenplay by director/co-producer/writer Prentice Penny takes several plots turns as expected, and the mood accordingly becomes more serious than before, but the movie keeps maintaining its lightweight tone even during that part. Thanks to cinematographer Elliot Davis, the movie is constantly filled with the vivid and authentic sense of locations and people, and it surely does not disappoint us at all in case of wine and barbecue, which appear as frequently as required while, probably, making you a bit hungry or thirsty.

Prentice also draws the engaging performances from his good cast members. Mamoudou Athie gives a likable lead performance, and he is complemented well by Courtney B. Vance, who has been one of the most reliable veteran performers for more than 30 years. As Louis’ no-nonsense wife, Niecy Nash clicks well with Vance during several key scenes between them, and we can instantly sense their characters’ long relationship right from the beginning. In case of the other substantial supporting performers in the film, Sasha Compère has a nice low-key chemistry with Athie, and Matt McGorry and Gil Ozeri are also effective in their small supporting roles.

I must point out that “Uncorked” does not feel that fresh in terms of story and characters, and I am disappointed with its rather weak finale, but I recommend it anyway because it is fairly entertaining at least. Although it could be more distinctive considering its solid gradients, I enjoyed it as much as those middle-range wines I have usually drunk these days, so I will not grumble for now. 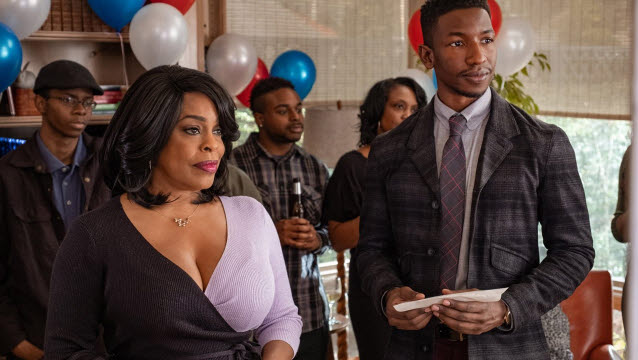 This entry was posted in Movies and tagged Barbecue, Family, Father and son, Wine. Bookmark the permalink.