Taika Waititi’s latest comedy film “Jojo Rabbit”, which won the Grolsch People’s Choice Award when it was premiered at the Toronto International Film Festival in last September, is a typical case of whimsical mixed bag. While it has some nice funny moments as busily swinging back and forth between a sweet coming-of-age tale and an irreverent satire on the horror and absurdity of Nazi Germany, the movie is often hampered by its uneven overall tone, and I was only left with mild dissatisfaction as being more aware of its flawed aspects.

Set in some rural town of Nazi Germany around the end of World War II, the story of the movie is mainly presented through the innocently warped viewpoint of a 10-year-old Hitler Youth member named Johannes Betzler (Roman Griffin Davis). Having unquestioningly followed the evil ideology of Nazi Germany just like many others around him, Johannes is certainly willing to do anything for their infamous leader Adolf Hitler, and he even frequently talks with Hitler in his mind, who, played by Waititi himself here in this film, is more or less than your average quirky imaginary friend.

Anyway, shortly after a painfully humiliating moment which inspires his nickname ‘Jojo Rabbit’, Johannes tries to prove his valor and dedication in front of his fellow Hitler Youth members supervised by Captain Klenzendorf (Sam Rockwell), but, alas, his clumsy attempt only results in a regretful incident which injures him considerably, and his single mother Rosie (Scarlett Johansson) is not so amused at all. Worrying that her son will be stuck in their home while becoming more isolated from others, she forcefully demands to Captain Klenzendorf that her son should be assigned to do anything outside, and Captain Klenzendorf cannot possibly say no to her as she makes it very clear to him that she is not someone he can mess with. 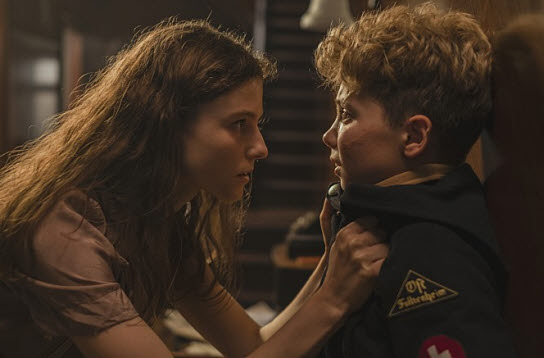 And then it turns out that there is another reason why Rosie wants her son to be outside their house as much as possible. When Johannes returns to their residence during one afternoon, he hears an unidentifiable sound from the upstairs, and he soon comes to discover that there is an adolescent Jewish girl hiding behind the wall in his recently diseased older sister’s room. While he surely knows that he must report to authorities as soon as possible, he hesitates when the girl, named Elsa (Thomasin McKenzie), points out that his mother will be arrested for hiding her if he ever tries that, and Johannes comes to discern that there is any other option for him except making a temporary truce with her for now.

While often discussing with his imaginary friend on this tricky circumstance, Johannes finds himself interacting with Elsa a lot more than he ever imagined. For getting to know the enemies of his country more, he demands her to tell everything about her people, and she humors him as telling many preposterous things such as how Jewish people are capable of mind-control, which he willingly absorbs for making a crude guide book on Jewish people. In addition, she also talks about her boyfriend she has yearned to see again for years, and, not so surprisingly, Johannes comes to have a crush on her while also becoming jealous of her boyfriend.

In the meantime, things get gloomier outside day by day. Although nothing seems to be bad on the surface, it is apparent that the country is going to lose the war, and, not so surprisingly, it also turns out that Rosie has been doing a lot more than hiding Elsa in her house. She surely knows how risky her situation still is despite the approaching end of the war, but she keeps maintaining her bright optimism as usual, and there is a small tender moment when she and her son get a chance to spend a little fun private time of their own in a local park.

Around the narrative point where the horror of the war finally comes upon their town (Is that a spoiler?), Waititi’s screenplay, which is based on “Caging Skies” by Christine Leunens, falters more than before as trying to do a little too many things together at once. While there are several dark moments as demanded, there are also a number of offbeat moments as required such as a brief outrageous shot involved with a certain supporting character, and, in my trivial opinion, they do not mix that well together without generating enough humor or gravitas to hold our attention, though I appreciate to some degrees how Waititi effectively utilizes a few recognizable pop songs throughout the film.

In case of the main performers in the movie, they try as much as they can for filling their broad caricature roles. Roman Griffin Davis, a young British actor who made his film debut here in this movie, carries the film well with his earnest performance, and he and Waititi, who surely has a ball with playing a flamboyantly exaggerated version of Hitler, click well together in many of their comic moments in the film. Although she is much better in Noah Baumbach’s “Marriage Story” (2019), Scarlett Johansson did a lot more acting here than she ever did in those Avengers movies, and Sam Rockwell is engaging to watch as usual even though he is mostly under-utilized just like other notable cast members in the film including Rebel Wilson, Alfie Allen, Stephen Merchant, and Thomasin McKenzie.

On the whole, “Jojo Rabbit” is a rather disappointing work from Waititi, who has impressed me with his solid comedy films including “What We Do in the Shadows” (2014) and “Hunt for the Wilderpeople” (2016). Mainly thanks to the substantial box office success of “Thor: Ragnarok” (2017), he is allowed to do whatever he wanted to do here, and I am glad about that, but I must say that his result is less successful than Roberto Benigni’s “Life Is Beautiful” (1997), another notable comedy film associated with World War II and the Holocaust. While that film genuinely amused and touched me, “Jojo Rabbit” merely stumbles and fumbles without much emotional resonance to linger on my mind, and now I feel an urge to revisit “Life Is Beautiful” for appreciating its effortless comic brilliance again.