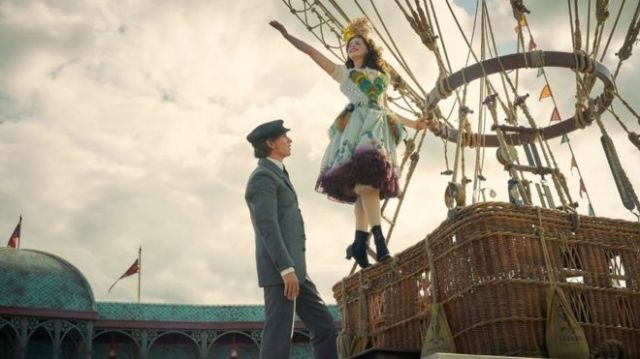 “The Aeronauts” is a mildly entertaining film which could be more effective if it focused more on its two different main characters’ risky adventure in the air. Although it surely works whenever it goes up and up along with them, the movie lets itself grounded in the earth a little too often, and that is a shame considering that it is anchored mostly well by its two strong main performers, who certainly do more than whatever is demanded by their roles.

Loosely based on Richard Holmes’s book “Falling Upwards: How We Took to the Air”, the movie quickly establishes its period background at the beginning. On one supposedly fine day of 1862, a British meteorologist named James Glaisher (Eddie Redmayne) is preparing for the launch of a big gas balloon for his scientific expedition at the higher level of the atmosphere, but he cannot help but become nervous because 1) he has no previous experience with balloon flight and 2) his balloonist Amelia Wren (Felicity Jones) has not arrived yet even though there are only a few minutes before the launch of their balloon.

Anyway, Wren eventually arrives in time, and she does not get along that well with Glaisher due to their apparent personality difference. While he is your average nerdy scientist quite determined to prove his scientific theories on weather during their risky flight, Wren is your typical lively adventuress who seems to be more focused on entertaining those many spectators waiting for the launch of the balloon, and she certainly does not disappoint them at all as wielding some showmanship upon them.

Nevertheless, Wren, who, according to IMDB trivia, is actually an amalgamation of Glaisher’s real-life expedition partner Henry Tracey Coxwell and several real-life female balloonists including Sophie Blanchard, turns out to be as professional as Glaisher. Not long after the launch of their balloon, they come across a sudden unexpected change in weather, and she deftly handles this perilous situation while not daunted at all by the enormous danger in front of them. Fortunately, they manage to avoid a fatal consequence, and Glaisher eagerly observes and records the physical details of the higher levels of the atmosphere while their balloon continues to float higher and higher as planned.

They are supposed to go down after breaking the current record for the highest flight altitude, but then Glaisher suggests that they should go higher than planned, as getting more driven by his scientific ambition and curiosity. Although understandably reluctant at first, Wren eventually agrees to Glaisher’s suggestion, and they soon come to face several harsh obstacles including low temperature and oxygen deficiency.

Never overlooking the sheer dangers surrounding its two main characters, the movie constantly provides a number of vivid, spectacular moments to be appreciated. While there are some terrifying moments including a wild and stormy scene which will surely make you a bit dizzy, there are also several awe-inspiring moments including the one involved with a horde of certain species, and all these moments feel real and convincing even though we are well aware of their technical aspects shown on the screen. 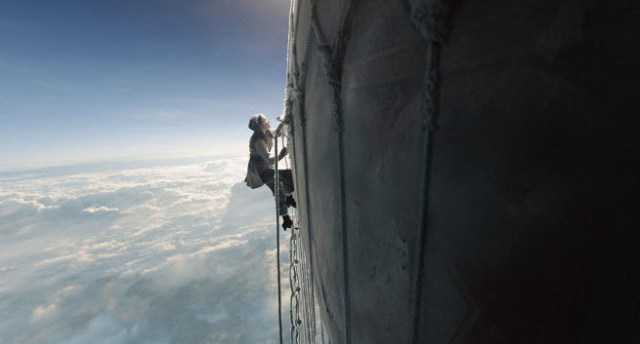 Unfortunately, the screenplay by Jack Thorne, which is based on the story adapted from Holmes’ book by Thorne and director Tom Harper, lets its main narrative interrupted often by a series of flashback scenes which feel rather perfunctory. We get to know a bit about how Wren still struggles with her grief over her recently diseased husband, and we also get some glimpse into Glaisher’s private life and academic struggle, but their respective personal dramas are clichéd to say the least while not adding that much to the main narrative of the movie.

At least, the two lead performers of the film try as much as they can do with their respective roles, and they did an admirable job of carrying the movie together from the beginning to the end. Felicity Jones, who has been more prominent since her Oscar-nominated turn in “The Theory of Everything” (2014), is plucky and feisty as demanded, and she gives a convincing physical performance during a climactic part where her character must push herself as hard as possible for her survival as well as Glaisher’s.  Eddie Redmayne, who incidentally appeared along with Jones in “The Theory of Everything” and then won an Oscar, is indubitably well-cast considering his boyish earnestness, and he and Jones are effortless whenever they pull or push each other on the screen.

In contrast, the other notable main cast members in the movie are mostly stuck in their thankless roles. While Phoebe Fox is Amelia’s concerned sister, Himesh Patel, who recently appeared in Danny Boyle’s disappointing comedy film “Yesterday” (2019), is Glaisher’s close friend, and Tom Courtenay, a veteran British actor who has steadily worked during last five decades since his unforgettable debut performance in “The Loneliness of the Long-distance Runner” (1962), is seriously wasted as Glaisher’s aging father.

Although I hesitate to recommend it due to my dissatisfaction with its weak aspects, “The Aeronauts” succeeds to some degree, and it did not bore me at least while also reminding me again of my aversion to heights. You may find yourself interested in riding a balloon after watching the film, but, folks, I would rather stay on the ground and look up to the sky from time to time.