“John Wick: Chapter 3 – Parabellum” is a brutal, intense, and electrifying action film which may numb your nerve ends a lot. While I occasionally cringed at its numerous moments of ruthless and remorseless violence during my viewing, I also enjoyed how these violent moments are presented well with slick style, palpable energy, and a bit of a morbid sense of deadpan humor, and the overall result is as entertaining as its two predecessors.

As many of you remember, our invincible hero John Wick (Keanu Reeves) found himself pulled back into his old criminal world due to the death of his dead wife’s pet dog in “John Wick” (2014), and then, according to the IMDB trivia, he killed 77 people for his personal revenge. When he was pulled back again into that world in “John Wick: Chapter 2” (2017) after being demanded to assassinate a certain important criminal figure, he killed 128 people for his survival, and he eventually found himself being ‘excommunicated’ by a powerful criminal organization called the High Table because he killed one of its members at the Continental Hotel in New York City, which is supposed to be a neutral zone for every thug and assassin in the world.

Thanks to Winston (Ian McShane), the wily manager of the Continental Hotel in New York City who is also Wick’s friend, Wick was allowed to have one hour before his excommunication getting officialized, and the opening scene of the “John Wick: Chapter 3 – Parabellum” shows Wick promptly embarking on his survival plan. All he has to do is retrieving a few necessary items at the New York Public Library and then going to his old boss, called The Director (Anjelica Huston), for getting some help, but, of course, he soon comes across a bunch of assassins and thugs eager to kill him for the bounty of no less than 14 million dollar, and we accordingly get an action sequence which will often make you wince for good reasons besides its sheer intensity and rapid rhythm. As watching how Wick relentlessly ruthlessly uses knives and many other sharp objects for fighting against a group of thugs, I uttered ‘ouch’ a couple of times, and that certainly amused me as well as a friend of mine who happened to watch the movie along with me.

Anyway, thanks to the Director, Wick can travel safely to Casablanca, and he meets Sofia (Halle Berry), who was once one of Wick’s colleagues but is now working as the manager of the Continental Hotel in Casablanca. While initially reluctant to help Wick, Sofia cannot refuse his request because, well, Wick helped her a lot some time ago and she must pay her debt to him now as she promised to him via her sacred oath.

The purpose of Wick’s visit to Casablanca is meeting a very influential figure presiding over the High Table, who is supposed to be somewhere in the desert area outside Casablanca. After going through another action sequence filled with lots of shootings as expected, Wick eventually comes to meet that figure in question (Is this a spoiler?), but then Wick finds himself pushed into another difficult circumstance due to what is demanded to him in exchange of his amnesty.

Meanwhile, the movie also focuses on how the situation becomes complicated in New York City. The representative of the High Table (Asia Kate Dillon), called the Adjudicator (Asia Kate Dillon), arrives, and this figure is ready to punish not only Winston but also the Bowery King (Laurence Fishburne), a local underground crime lord who helped Wick in “John Wick: Chapter 2”. A Japanese assassin named Zero (Mark Dacascos) and several other thugs working under him soon come into the picture, and they eventually confront Wick when he returns to New York City for whatever should be done by him.

During its last act, the movie bombards us with a series of impressive action sequences, and it is fun to watch how it goes for more style, intensity, and excitement under the dexterous direction of director Chad Stahelisk, who worked as a stunt man in numerous action movies before directing “John Wick” and “John Wick: Chapter 2”. While I delighted to see a vehicle action sequence which is clearly influenced by South Korean action film “The Villainess” (2017), I was also quite impressed by the climactic sequence unfolded within a big space decorated with lots of lights and glasses.

In addition, the movie becomes a little humorous from time to time, and that is why it sometimes looks like a big, violent joke just like its predecessors. Keanu Reeves, who is having a very interesting year thanks to not only this film but also his hilarious supporting performances in “Always Be My Maybe” (2019) and “Toy Story 4” (2019), diligently sticks to his usual stoic mode as a straight man of action with a few words, and he is also surrounded by a bunch of colorful performers who gladly fill their archetype roles as required. While Ian McShane, Lance Reddick, Laurence Fishburne are dependable as before, Halle Berry, Asia Kate Dillon, Jerome Flynn, Saïd Taghmaoui, and Anjelica Huston are also fun to watch, and Mark Dacascos is clearly enjoying himself as Wick’s main opponent.

Overall, “John Wick: Chapter 3 – Parabellum” may be a little too tough and violent to some of you, and it is a well-made genre piece nonetheless, and it did not disappoint me in terms of style and substance. I am sure that more guys will be killed by Wick again during the next sequel which will be released in 2021, but I will not mind as long as that is presented with enough style and substance, while probably lamenting again on the continuing colossal waste of human resource against him. 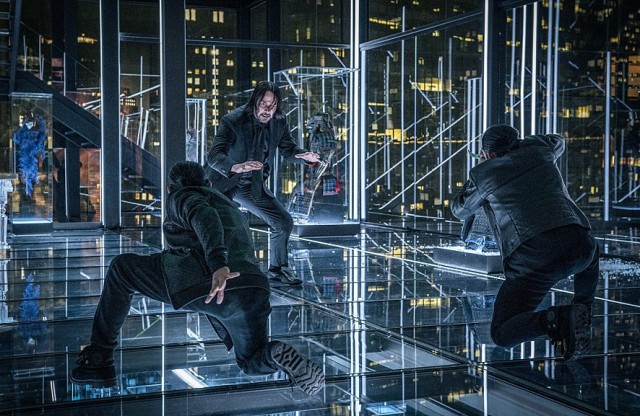 This entry was posted in Movies and tagged action, Killer. Bookmark the permalink.