The hero of French film “Sauvage” is one of the most miserable movie characters I have ever seen during recent years. While casually going through his seedy daily life without no discernable future, this young man simply wants to love and be loved, but, alas, love is something he cannot get easily in his harsh world, and it is sometime quite difficult for us to watch how he comes to let himself driven further into more misery and despair.

After the opening scene which will catch you off guard for a good reason, the movie phlegmatically observes how Léo (Félix Maritaud) and his fellow male prostitutes work at some remote site near Paris during daytime. They patiently wait on the road as cars and people pass by from time to time, and we watch some of them eventually getting the opportunity to earn a bit of cash.

Léo has been friendly with a male prostitute named Ahd (Eric Bernard), who says to Léo that he is not a gay but does not hesitate to sell sex and his body to his male customers at all. During one early scene in the film, he and Léo are taken to the residence of a disabled middle-age guy, and Léo is willing to provide whatever is demanded by their latest customer along with some intimacy, but Ahd is more strict about his sexual service, as shown from his refusal to kiss that customer.

As time goes by, Léo and Ahd become closer to each other, though Ahd is reluctant to admit his affection toward Léo. While he often protects Léo from a number of troubles including a guy notorious for his sadistic tendency, he usually distances himself from Léo while searching for any sugar daddy to help him escape from his shabby status, and that certainly frustrates Léo a lot.

Furthermore, it gradually turns out that Léo really needs to see a doctor for his deteriorating physical condition. Although it is not AIDS at least, he frequently coughs, and he does not try to do anything about that even after getting some medical help from a kind doctor genuinely concerned about his worsening health. He keeps prostituting himself as usual, and he also often uses drugs just like many of his colleagues.

And Ahd becomes more estranged from Léo, especially after he finally gets some old guy willing to not only support him and but also live along with him. Quite depressed by this, Léo subsequently submits himself to an obnoxious gay couple who cruelly abuse and humiliate him, and that is surely the most painful moment in the film.

While steadily maintaining its dry, calm attitude, the movie sometimes strikes us with the raw, unflinching presentation of sex and nudity, and director/writer Camille Vidal-Naquet, who received the Louis Roederer Foundation Rising Star Award when the movie was shown at the Cannes Film Festival in last year (This is his first feature film, by the way), skillfully handles a number of graphic sex scenes in the film. Like Alain Guiraudie’s “Stranger by the Lake” (2013), the movie does not flinch from full frontal nudity at all, and the overall result does not feel gratuitous thanks to its unadorned realistic approach coupled with some tactful touches.

Meanwhile, the movie also gives us a few small tender moments. After Ahd eventually walks away from him, Léo gets some consolation from a foreign male prostitute, and it looks like they can work and live together as a couple, but it does not take much time for him to see that Léo’s heart is still yearning for the other person. At one point, he flatly but sincerely reminds Léo of why their relationship will not work, and both of them come to accept that fact with bitter resignation.

In case of a middle-aged Canadian guy whom Léo comes across on one day, he tentatively approaches to Léo, but Léo cannot love him back even after getting considerable help from this kind guy, and we come to sense the growing conflict inside Léo around the time when he is about to take a big step for his future later in the story. His eventual decision may not be sensible, but we are not so surprised as, to some degree, understanding his matters of heart.

The movie depends a lot on the talent and presence of its lead actor, and Félix Maritaud, who incidentally also appeared in two other recent notable queer French films “BPM (Beats Per Minute)” (2017) and “Knife+Heart” (2018), gives a fearless performance alternatively engaging and harrowing. Although the movie does not tell us much about his character’s past, Maritaud fills his character with considerable life force, and he is also supported well by several other substantial supporting performers surrounding him. While Eric Bernard is believable during his key scenes with Maritaud, Nicolas Dibla is equally fine in his supporting part, and Philippe Ohrel is suitably gentle and caring as a possible sugar daddy for Léo.

On the whole, “Sauvage” is definitely not something you can casually watch on Sunday afternoon, but it is an admirable piece of work, and, in my humble opinion, it is also one of interesting debut feature films I saw during this year. Sure, this is basically another typical story about a prostitute with a heart of gold, but it is shown and told well with striking realism and commendable commitment, and you may find yourself having some empathy on its hero as watching the haunting last shot of the film. 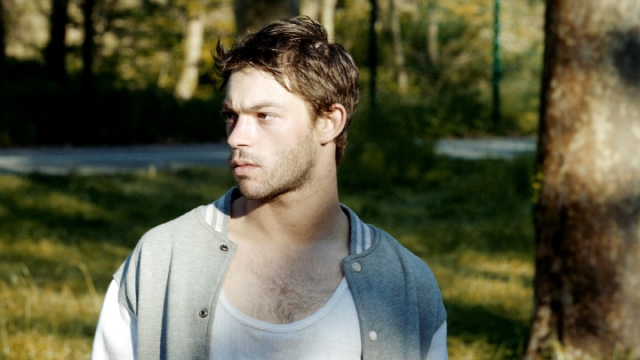 This entry was posted in Movies and tagged Homosexuality, Male prostitute, Sex. Bookmark the permalink.