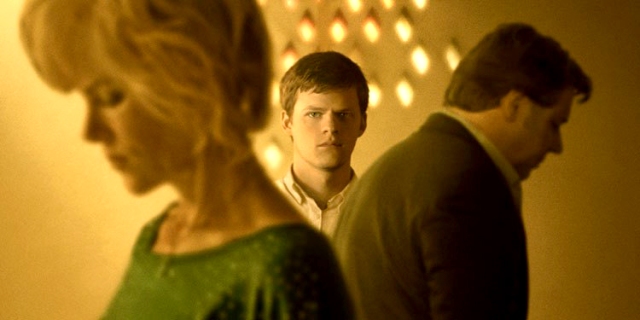 “Boy Erased” intends to give us a close look into the horror of gay conversion therapy program, and it mostly succeeds as sticking to its restrained but sobering storytelling approach. Although I think it could be angrier and edgier on its subjects, there are some quiet but powerful moments to remember, and it is also supported well by the good performances from its talented main cast members.

Based on the memoir of the same name by Gerrard Conley, the movie presents a fictional presentation of Conley’s real-life story mainly through the viewpoint of Jared Eamons (Lucas Hedges), a gay lad who is the son of Baptist minister Marshall Eamons (Russell Crowe) and his wife Nancy (Nicole Kidman). After coming to learn of their son’s homosexuality due to a certain incident at a college he is attending, Jared’s parents decide to send their son to a gay conversion therapy center, and the opening scene of the movie shows Jared being taken to that center by his mother, who is going to stay in a nearby hotel while he goes through his gay conversion therapy program.

When Jared begins his first day of gay conversion therapy program under chief therapist Victor Sykes (Joel Edgerton), things do not look particularly bad, but, of course, he comes to see the dark, twisted aspects of gay conversion therapy program as days go by. While frequently emphasizing faith and the grace of God as your average Christian, Sykes constantly talks about why homosexuality is an unnatural sin and why Jared and others in the program need to be cured of their temptation, and he later instructs them to present every sinful activity of their family members just because he thinks homosexuality is resulted from problematic domestic environment.

As passively doing whatever is instructed by Sykes, Jared comes to wonder about whether he should be cured, and his doubts grow further as he observes some of his fellow program participants. While Jon (Xaiver Dolan) is constantly nervous and cautious about being tempted again, Gary (Troye Sivan) later advises Jared on how to present oneself better to Sykes for avoiding a worse situation, and Cameron (Britton Sear) is clearly confused and depressed as pushed harder and harder by Sykes. At one point later in the story, Jared and other program participants watch Cameron being cruelly punished for a minor transgression, and we are reminded of how people can sometimes commit atrocity in the name of love and religion.

In the meantime, several flashback scenes show how Jared became aware of his homosexuality. During his high school years, he was in a relationship with some girl who clearly liked him, but he did not feel right when she approached closer to him during one evening. Not long after he began his college education, he found himself attracted to a handsome student at an art exhibition, and he and that student came to have an intimate moment at that student’s residence.

The adapted screenplay by director/writer Joel Edgerton slowly raises its dramatic tension below the surface as Jared’s circumstance becomes more exasperating and suffocating for him. He tries to go along with other program participants as much as he can, but then there eventually comes a point when he comes to feel that enough is enough, and the mood between him and Sykes accordingly becomes more intense than before.

While never sensationalizing the subject of his movie, Edgerton did a good job of establishing the low-key tone on the screen. As his cinematographer Eduard Grau steadily maintains muted gray atmosphere, the sense of isolation and oppression surrounding Jared and other characters in the film feels palpable to say the least, and we come to empathize more with Jared’s accumulating frustration and exasperation.

As the center of the film, Lucas Hedges, who had an interesting time as appearing in not only this film but also “Mid90s” (2018) and “Ben is Back” (2018) in last year, gives an engaging lead performance, and he is surrounded by several notable performers. In what may be his best performance during recent years, Russell Crowe has a nice scene around the end of the film which touchingly reveals his character’s conflicted thoughts and feelings, and Nicole Kidman, who happens to appear along with Crowe on the screen for the first time, has several fine moments as her character actively comes to decide what should be really done for Jared. While Edgerton is effective as another substantial part of the story, Xavier Dolan, Joe Alwyn, Théodore Pellerin, Troye Sivan, Britton Sear, and Cherry Jones are well-cast in their respective supporting roles, and it is rather curious to watch the subdued performance from Dolan, which feels quite different from those flamboyant arthouse films directed by him.

On the whole, “Boy Erased”, which is the second feature film directed by Edgerton, is an admirable piece of work, and I appreciate its strong aspects including the earnest efforts of Hedges, Crowe, and Kidman, but I must point out that it is relatively less distinctive compared to “The Miseducation of Cameron Post” (2018), which happened to be another queer drama about gay conversion therapy program in last year. Yes, this is basically a conventional queer drama intended to be accessible to a wider range of audiences, but it is still worthwhile to watch for several good reasons, and it will certainly make a nice double feature show along with “The Miseducation of Cameron Post”.

This entry was posted in Movies and tagged Christianity, Gay conversion therapy, Homosexuality. Bookmark the permalink.