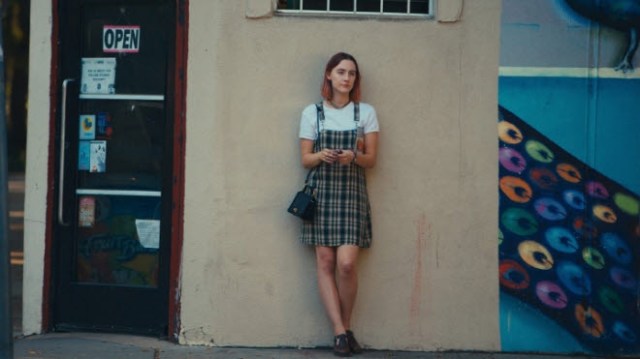 At first, “Lady Bird” looks like another conventional adolescent coming-of-age drama. Again, we have a young heroine eager to go further with her burgeoning life and she surely comes to grow up a lot in the end as being ready for the next chapter of her life, but her bumpy emotional journey is vividly depicted with considerable intimacy and intelligence, and we can only admire how precisely funny the movie is – and how effortlessly poignant it also is.

The movie is mainly about Christine McPherson (Saoirse Ronan), a 17-year-old girl who is a Catholic high school student living in a suburban area of Sacramento, California. As her senior year is being over in 2002, Christine, who has preferred to be called ‘Lady Bird’, hopes to go to any prestigious college far away from her hometown, but the circumstance is not exactly good for her. Her parents do not have enough money for that, and, above all, her headstrong mother Marion (Laurie Metcalf) does not approve of that. She simply wants her daughter to be more practical, but Christine is adamant with her growing hope, and their conflicting relationship is exemplified well by the opening scene of the movie. The mood initially seems jolly as they listen to an audiobook copy of John Steinbeck’s “The Grapes of Wrath”, but then they start to quarrel about Christine’s college matter, and the scene eventually ends with a sudden moment of jolt.

At her school, Christine joins a drama club along with her close friend Julie (Beanie Feldstein). While she is not so pleased to see that she does not get a big part in the upcoming musical performance, she quickly becomes close to Danny (Lucas Hedges, who had a good year thanks to his solid supporting turns in this film and “Three Billboards Outside Ebbing, Missouri” (2017)), and he is soon introduced to her parents when he is going to take her to his grandmother’s house on Thanksgiving Day. As spending more time with him, Christine comes to have some expectation for what may be her first serious romance, but, alas, this nice, earnest boy turns out to be not as suitable as she thought. 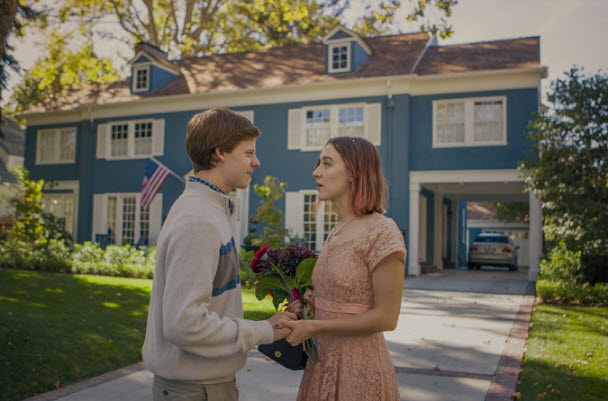 While quite disappointed by this, Christine keeps trying to look cool as before, and that leads her to Jenna (Odeya Rush) and Kyle (Timothée Chalamet, who recently drew lots of attention for his acclaimed breakthrough performance in “Call Me by Your Name” (2017)). As your average sassy rich girl, Jenna is everything Christine is not, and Christine tries to get closer to Jenna as much as she can, but she later experiences a painful moment of humiliation because of her small lie. With his seemingly sophisticated appearance, Kyle looks like a good alternative to Danny, but, not so surprisingly, he turns out to be your typical selfish jerk, and that leads to one of the most humorous moments in the film.

As smoothly moving from one episodic moment to another, the movie lets us emphasize more with Christine’s emotional wandering, but it also recognizes how self-absorbed she can be just like many other teenagers. She is sometimes rather unkind and unpleasant to people around her, and her tumultuous emotions frequently clash with the growing impatience of her mother, who surely loves her daughter but cannot help but be angry and resentful at times.

But things are not always bad between Christine and Marion, and the screenplay by director/writer Greta Gerwig thoughtfully handles their complex mother and daughter relationship. When they are buying clothes for Christine in one scene, they have a brief but undeniably touching conversation, and that is one of the best moments in the film. Like any good mothers, Marion simply wants the best for her daughter, and Christine understands that, though they often do not agree well with each other.

While their relationship is the center of the story, the movie also pays some attention to its other substantial characters. The scenes between Christine and her father Larry (Tracy Letts) feel warm and tender, and the same thing can be said about a private conversation scene between him and his wife. Their adopted son Miguel (Jordan Rodrigues) and his girlfriend Shelly (Marielle Scott) may look goofy at first, but they are depicted with loving care, and so are several school characters revolving around Christine, who are presented with each own distinctive personality.

The main cast members of the film are impeccable. Saoirse Ronan, who astonished us with her unforgettable performance in “Atonement” (2007) and then impressed us a lot more with a series of stellar acting turns including her recent Oscar-nominated performance in “Brooklyn” (2015), gives another superb performance to remember. While deftly modulating her nuanced performance between comedy and drama, Ronan subtly conveys to us her character’s gradual emotional growth, and that is why the last scene of the movie works with poignant emotional resonance. In case of the supporting performers surrounding her, Laurie Metcalf, who will definitely be Oscar-nominated along with Ronan for this movie late in this month, is commendable as Ronan’s equal acting match, and I also enjoyed how notable veteran performers like Tracy Letts, Lois Smith, and Stephen McKinley Henderson are allowed to have each own moment to shine.

While adolescent coming-of-drama has been a rather common genre, “Lady Bird” brings lots of fresh air to its genre elements, and it is almost perfect in terms of mood, storytelling, and performance. While this is only her first solo work, Gerwig, who has steadily risen since her likable performance in “Greenberg” (2010), shows here another side of her immense talent through her confident handling of story and characters, and I think she will be another interesting American filmmaker to watch. In fact, I am willing to wait for whatever will come next from her.

This entry was posted in Movies and tagged Coming-of-age drama, Family, High School, Mother and daughter. Bookmark the permalink.