Alternatively playful and melancholic, South Korean film “On the Beach at Night Alone”, the latest work from Hong Sang-soo, gives us a somber character study which amusingly resonates with what happened in its auteur’s personal life. To be frank with you, I have no idea on how much the movie actually reflects the relationship between him and his lead performer, but all I can tell you for now is that Hong gives us another interesting human comedy while also drawing what may be remembered as one of the best performances in his lead performer’s career.

Kim Min-hee, who previously appeared in Hong’s “Right Now, Wrong Then” (2015), plays a young performer named Young-hee, and the first part of “On the Beach at Night Alone” revolves around how Young-hee spends some time in Hamburg, Germany along with her friend Ji-young (Seo Young-hwa). While they go around various places including a public park and a bookstore, they constantly talk with each other on several things including love and life, and we get bits of information about what happened to Young-hee in South Korea before she came to Hamburg. After her affair with a married movie director became known in public, she flied to the city for having her own quite private time, and it certainly helps that she is a mere foreign visitor in the city.

As she emphasizes during one scene, Young-hee wants to make a fresh start as simply being herself, but she also finds herself still attached to the matter she wants to put behind herself. It turns out that she is waiting for that movie director to come to the city for meeting her, and she remains unsure about her feelings while more aware of the uncertainty in front of her.

While steadily maintaining the grey melancholic mood around her, the movie throws one particularly offbeat element onto the screen, and you will be as baffled as I was during the last shot of its first part. Regardless of whether that weird moment symbolizes anything, it reminds me of how Hong’s movies often caught us off guard with odd moments such as that memorably hilarious encounter between one of the main characters in “Hahaha” (2010) and a historic figure from the past. 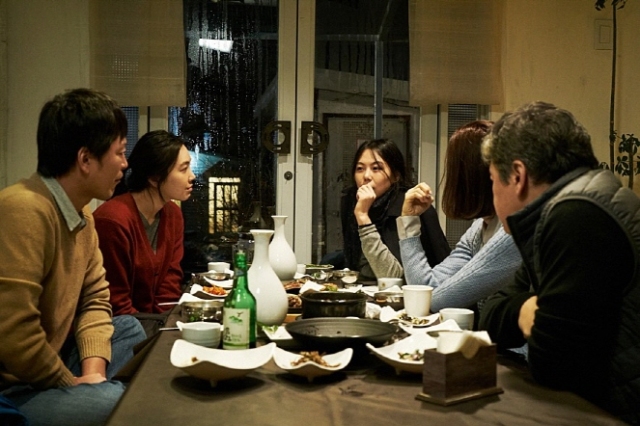 In the second part, Young-hee is back in South Korea, and the first shot of this part shows us her watching a movie alone in the darkness of an arthouse movie theater in Gangneung, a coast town located in the east region of South Korea. Right after the movie is over and she comes out of the screening room, she encounters Cheon-woo (Kwon Hae-hyo), and then they spend some time together at a nearby cafe run by Myeong-soo (Jeong Jae-young), another guy in her life besides Cheon-woo and the aforementioned movie director. Not long after Cheon-woo leaves, Myeong-soo arrives to meet Young-hee, and their conversation leads to one of the funniest moment in the movie as it gradually reveals what a pathetic dude Myeong-soo is.

Young-hee and these two guys later have a dinner along with two other characters, Do-hee (Park Ye-joo) and Joon-hee (Song Seon-mi). As they become quite drunk together, the mood casually swings between jolliness and awkwardness, and Kim, who deservedly received the Silver Bear for Best Actress award for her charming performance here in the film, and the other performers in this sequence are spontaneous with Hong’s smooth handling of several comic moments including the one which will surely take you back to Kim’s previous performance in “The Handmaiden” (2016).

As we are amused by her comical interactions with other characters around her, we also come to feel the growing discontent and loneliness inside Young-hee. Her affair with that movie director is over now, but that past still sticks around her like a stigma as being mentioned by others, and she cannot help but be brutally frank about her bitter feelings in front of others as driven by alcohol. As watching how her character looks more isolated along the narrative, I was reminded of how Kim was unfairly treated by South Korean media and public after her affair with Hong was exposed around the time when the movie was completed.

In case of Hong, it seems he also wants to talk about his feelings, and that is mainly expressed through a character played by Moon Seong-geun during another sequence accompanied with lots of booze to drink. The moment when that character blurts out a passage from some book is rather blatant, but it is so scathingly funny that I found myself quietly laughing along with several audiences around me during the screening I attended on this Thursday evening.

Anyway, Hong gives his talented lead actress a number of wonderful moments to shine, and I enjoyed how Kim ably embodies her character’s complex emotional state without missing any beat. There is a plain but lovely scene in which Young-hee quietly sings a song by herself, and Kim’s expressive face is more than enough to convey us her character’s thoughts and feelings.

Although things remain uncertain for its heroine even during the last scene, “On the Beach at Night Alone” is tentatively optimistic in the end, and I feel the same about Hong and Kim. While Hong is already preparing to release his another new film around this year, Kim has received lots of acclaim as the movie is being shown in South Korea at this point, and we will see her appearing along with Isabelle Huppert in that new film by Hong. I hope Young-hee will be able to move on like they do.

Sidenote: The title of the movie comes from a poem by Walt Whitman, by the way.

This entry was posted in Movies and tagged Affair, Performer, South Korean Film. Bookmark the permalink.