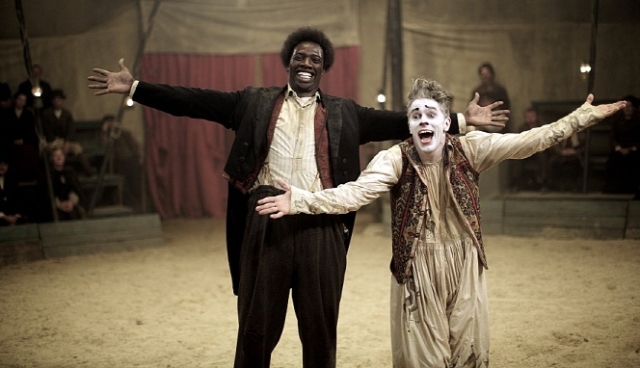 Inspired by the career of two real-life clowns who were famous around the early 20th century, French film “Chocolat” is an old-fashioned show business melodrama which is a little too rote and predictable at times. It often works whenever it focuses on the dynamics between its two different main characters on the ring, but it also feels incoherent and superficial as trying to deal with too many story elements within its 2-hour running time, and it is a shame that the movie does not put enough trust on its two lead performers.

James Thierrée, a veteran circus performer who is also Charlie Chaplin’s grandson, plays George Footit, a struggling clown looking for any opportunity from a local circus trope in the northern area of France in 1898. While he fails to impress the manager of the trope despite his good efforts, Footit later notices a negro guy named Kananga (Omar Sy) during the circus performance. Kananga merely plays a menacing cannibal in front of the audiences, but Footit sees more potential from him, and that is how he come to get an idea of pairing himself with Kananga.

After Footit persuades Kananga to work with him, they soon find themselves on the ring for their first trial. The beginning is not exactly promising to say the least, but then they get better than expected once they find how to click together well with each other on the ring. While Footit plays a dominant white guy who is easily exasperated, Kananga plays a submissive black guy who gets frequently slapped and kicked, and their broad tactics are effective enough to draw good laughs from their audiences.

Although this is a bit uncomfortable to watch for us due to its inherent racial undertone, Thierrée and Sy have good comic chemistry between them, and it is entertaining to watch how agilely they interact with each other on the ring. While Thierrée is effortless in his physical movements as ably supporting his co-star, Sy is ebullient with his likable screen persona previously demonstrated in “The Intouchables” (2011) and “Samba” (2014), and the screen is filled with energy and tension as they bounce along with each other on the ring.

As their popularity increases day by day, Footit and Kananga now present themselves as ‘Footit and Chocolat’, and then they are approached by Joseph Oller (Olivier Gourmet), the manager of Nouveau Circus in Paris. Of course, they do not hesitate to accept Oller’s proposition at all, and Kananga is especially excited by the prospect of more fame and success to come. As they become more successful and famous as promised by Oller, he becomes far more extravagant than before, and he also gets involved with a local mob thanks to his gambling habit.

In contrast, Footit is serious about work and business as before, and we see the growing conflict between him and Kananga as Kananga continues to enjoy his rising status as the first famous black entertainer in France. With his growing ego, Kananga becomes less willing to be slapped and kicked by Footit, and that leads to one tense moment on the ring when he commits something quite unexpected to the shock of his partner.

And he becomes more aware of how much he is discriminated just because of his skin color. At one point, Kananga is arrested by the police because he does not have an identification document, and there is a brutal scene where he is cruelly abused by police officers in a prison. While being incarcerated in the prison, he meets a fellow negro inmate named Victor (Alex Descas), and that incidental encounter makes him a little more serious than before.

Later in the story, Kananga attempts to perform the lead role of William Shakespeare’s “Othello” for being regarded as a serious artist, but the director Roschdy Zem, who also adapted Cyril Gely’s screenplay with Olivier Gorce and Gérard Noiriel, fails to generate enough dramatic momentum to hold our attention. The movie simply goes through expected high and low plot points without adding any dramatic depth to story and characters, and the following stage performance sequence feels rather insipid despite the active reaction from the audiences in that sequence.

Furthermore, the movie is hampered by its scattershot narrative which looks around numerous things but then leaves most of them underdeveloped. When a certain fact about Footit’s private life is revealed around the middle of the story, we can see how that can be juxtaposed with Kananga’s social position in interesting ways, but the movie never delves deep enough into that aspect. It is also disappointing that many of supporting characters in the film remain on the level of caricatures while being no more than storytelling tools, and Clotilde Hesme is stuck with a thankless job of playing Kananga’s love interest. She tries as much as she can with her bland character, but we never get the full understanding of why her character keeps sticking to her lover to the end with lots of care and patience.

Anyway, Sy and Thierrée still are the best part of “Chocolat”. While Sy acquits himself well despite a number of heavy-handed scenes he is forced to handle, Thierrée brings real melancholy and poignancy to that familiar cliché associated with clown, and I enjoyed their duo performance although I did not like the movie enough for recommendation. In my trivial opinion, these two talented performers could make their characters as real as the archival footage shown at the end of the movie, and it is too bad that they are not allowed to do that even during the finale.