Loosely inspired by a sad real-life story during the aftermath of the World War II, French film “The Innocents” is an understated period drama with thoughtful moments to appreciate. While never overlooking the dark, tragic aspect of its story, the movie engages us as calmly observing its characters’ difficult circumstance, and we are touched by the hope and redemption glimpsed around the end of the story.

The movie opens with a seemingly peaceful scene unfolded in the chapel of a small convent located somewhere in Poland. It is 1945 December, and the World War II is officially over, but it is gradually revealed that the convent has been hiding a secret for several months. When the war was being over, many nuns in the convent were raped by a bunch of Russian soldiers, and some of them got pregnant as a consequence. Now one of these pregnant nuns is in very painful labor, but they cannot ask anyone outside for help because that may expose their terrible secret in public.

However, a young nun decides that something should be done for that pregnant nun in pain, so she bravely goes outside the convent alone for finding any possible help. After passing through a remote wintry forest covered with snow, she arrives in a nearby town, and she soon encounters Mathilde Beaulieu (Lou de Laâge), a female doctor working for the French Red Cross. At first, Mathilde does not pay much attention to her plea, but she is eventually persuaded by the young nun’s persistence, so she comes to the convent along with her for helping that pregnant nun. 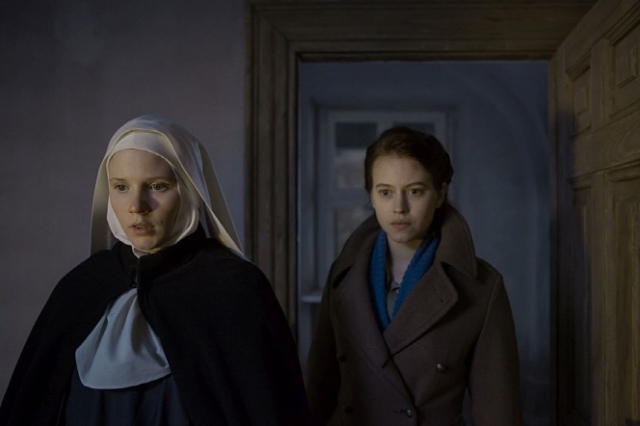 On the next day, Mathilde comes again to the convent for checking that nun, and then she comes to learn about other pregnant nuns to the dismay of Mother Superior (Agata Kulesza), who does not welcome the presence of a stranger in her convent but does not reject Mathilde’s help. When the convent is suddenly shaken by a group of unwelcomed visitors on one day, Mathilde and Mother Superior stick together for protecting the convent, and that becomes a breakthrough moment between Mathilde and many nuns in the convent, who come to trust her a lot more than before.

As Mathilde spends more time in the convent, the movie immerses us in the plain, quiet environment of the convent while often observing its nun characters going through their daily routine. Although many of them initially look indistinguishable from each other, some of them are depicted with each own personality enveloped in their clothes, and we come to care about their silent inner struggle. They naturally have doubts about their faith after the war cruelly stomped on their belief, and their feelings toward their god and religion are summarized well during one private scene between Mathilde and Sister Maria (Agata Buzek), a young nun who turns out to be more secular than expected while having the very shrewd understanding of faith and life.

Meanwhile, the movie also focuses on the budding romance between Mathilde and Samuel (Vincent Macaigne), a fellow Red Cross doctor who may be gruff on the surface but is actually a nice, caring guy who really likes Mathilde. Macaigne and de Laâge have good low-key chemistry together in their scenes, and we are not so surprised when one evening at a shabby local bar leads to the scene where Mathilde and Samuel become franker about their mutual feeling to each other.

The screenplay by the director Anne Fontaine and her co-writers Sabrina B. Karine, Pascal Bonitzer, and Alice Vial, which was developed from the original concept by Philippe Maynia, wisely lets its plot elements roll by themselves. While there are a couple of tense moments including the one involved with Mathilde’s unpleasant encounter with several Russian soldiers, the mood of the movie is mostly calm and serene, and Fontaine and her cinematographer Caroline Champetier did a good job of establishing the sense of desolation around the characters in the film.

Fontaine also draws engaging performances from her main cast members. Gradually holding the center of the film through her restrained performance, Lou de Laâge is excellent as a no-nonsense heroine who simply follows human decency like any good person would in her situation, and Agata Kulesza and Agata Buzek are equally fine in their respective roles. While Kulesza, who was superlative as a crucial supporting character in Oscar-winning Polish film “Ida” (2013), brings human nuances to what could be a thankless role, Buzek holds her own place well between her two co-performers, and I enjoyed how her character and Mathilde come to bond together despite their apparent difference. The performers playing the pregnant nuns in the film are also believable in their supporting performances, and it is sometimes poignant to watch how some of these characters respond to their physical/spiritual crisis.

Overall, “The Innocents”, which is released as “Agnus Dei” here in South Korea, is a good film supported well by the power of storytelling and performance. Although I duly noted that 1) the ending comes a little too easily compared to what has been built up to that point and 2) using Max Richter’s “On the Nature of Daylight” on the soundtrack has been quite clichéd these days, I admired how the movie respectfully handles its story subjects as steadily maintaining its non-judgmental attitude, and I was moved enough to forgive its shortcomings during my viewing. It has a story worthwhile to be told, and it did its job mostly well.

This entry was posted in Movies and tagged Convent, Nun, War. Bookmark the permalink.