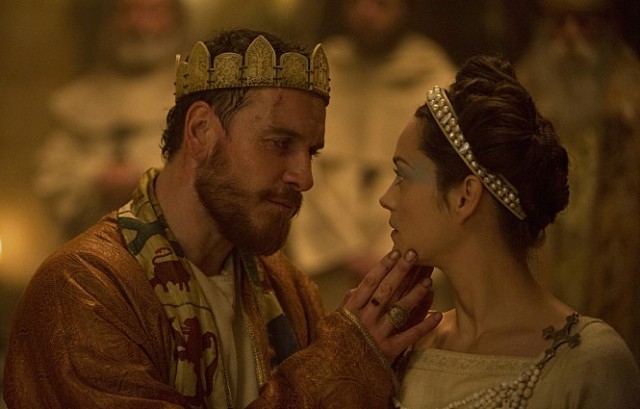 Justin Kurzel’s “Macbeth” is a relentlessly dark and brutal adaptation of that ‘Scottish Play’ by William Shakespeare, and that is a right storytelling approach for its grim savage tale of corruption and madness, which is “told by an idiot, full of sound and fury, signifying nothing.” While the movie is definitely not what can be described as ‘entertaining’, its dark heart pulsates with its gritty style and malevolent spirit amid despairs and savageries to fill the screen, and that is certainly something compelling to watch at least.

The opening scene, which is not in Shakespeare’s original play, effectively sets the overall tone of the film. We see the cold, barren landscapes of Scotland during the Middle Age, and you may wonder how life can be possible in this bleak world, which often feels like an alien planet somewhere between purgatory and hell. As reflected by the funeral of a young child during this scene, life is short and cheap for many inhabitants of this world, and that is further exemplified by the following battle sequence. It is just a simple matter of getting killed or not for everyone on the battlefield, and we get some visually striking moments during this barbarous sequence drenched in blood and grime.

Except several notable changes, the adapted screenplay by Jacob Koskoff, Michael Lesslie, and Todd Louiso is mostly faithful to the basic plot of Shakespeare’s play. After defeating his enemies at the end of a civil war in his country, Scottish general Macbeth (Michael Fassbender) gets more honor and glory as his king’s loyal servant, but then he becomes tempted by a prophecy from the witches whom he and his friend Banquo (Paddy Considine) come across as returning from their victorious battle. Three witches, who are accompanied with a young girl and an infant in this film, give two prophecies which will be the origin of all the evils to follow: Macbeth is going to be not only the Thane of Cawdor but also the King of Scotland, and, though he will not be the king, Banquo is destined to be the ancestor of many kings to come in the future instead.

Both Macbeth and Banquo do not take these prophecies seriously at first, but then they soon learn that King Duncan (David Thewlis) has just appointed Macbeth as the Thane of Cawdor, and, despite his friend’s cautious warning, an insidious thought is germinated inside Macbeth as he thinks more about what the witches told him. He can just let things happen if he wants that way, but he finds himself thinking more about doing something he never imagined before – especially after King Duncan appoints his son Prince Malcom (Jack Reynor) as his rightful heir to the throne during his visit to Macbeth’s place.

Of course, Lady Macbeth (Marion Cotillard) has already been ready to push her husband to the throne by any means necessary. Although Macbeth is still reluctant even when he sees a dagger in front of him, he eventually succumbs to the temptation as being pushed by his scheming ambitious wife, so there later comes one of the quotable lines in the play: “What’s done, is done.”

While Macbeth finally gets the power as he desired, he only becomes more miserable and nervous despite the crown on his head. He begins to worry about the prophecy on his friend, and that ironically leads him to his destructive downfall. Things begin to fall apart after he has an embarrassing moment of mental breakdown in front of other noblemen including Macduff (Sean Harris), and he is driven into more madness as desperately trying to secure his crumbling position.

As the movie goes further into its darkness, the director Justin Kurzel and his crew including the cinematographer Adam Arkapaw and the composer Jed Kurzel make it sure that their film looks more disturbing and ominous than before. The climax part around Macbeth’s castle is shrouded in the hazy otherworldly atmosphere enveloping everyone on the screen, and the movie also has a nice clever variation of how Great Birnam Wood comes to Dunsinane Hill. Macbeth’s expected end during the finale feels like being no more than another unpleasant killing to be done, and the last scene leaves an uneasy tone amplified throughout the end credits sequence, whose reddish mood is creepy enough to prick your thumb. 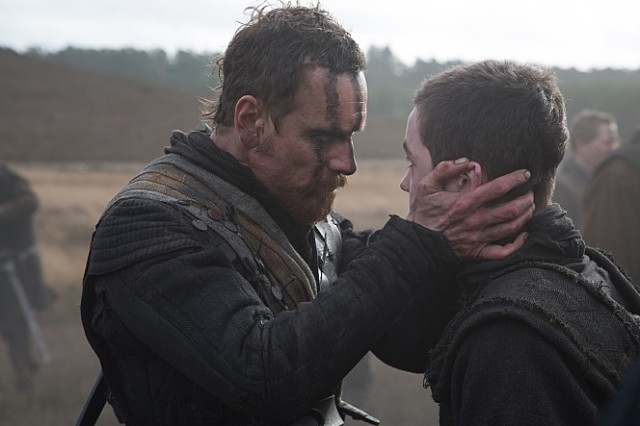 The two charismatic lead performers of the film give intense performances which hold our attention even at its darkest moments. As shown from his acclaimed performances in “Shame” (2011) and “12 Years a Slave” (2013), Michael Fassbender has always been good at playing edgy characters driven and consumed by their worst impulses, and his interpretation of Macbeth is another electrifying showcase from this very talented actor. When we see Fassbender’s solemn face in the opening scene, we can instantly sense the darkness inhabiting inside Macbeth, and that is just the beginning for what Fassbender is going to show us besides his despairing rendition of “Tomorrow, and tomorrow, and tomorrow” soliloquy later in the film.

I must confess that it was rather difficult for me to imagine Marion Cotillard playing a devious manipulator, but she is surprisingly convincing in her icy performance which clicks well with her co-star’s smoldering presence, and her more sympathetic interpretation of Lady Macbeth is one of interesting variations in the movie. While Lady Macbeth might have hungered for power more than her husband in the beginning, she is then horrified and overwhelmed by many terrible consequences of what she ignited in his heart, and Cotillard is serenely devastating during the quiet morning scene in a wooden chapel where her character struggles with the mounting guilt inside her.

Shakespeare’s original play were previously transferred to the screen many times before, and the most famous ones are Orson Welles’s 1948 version and Roman Polanski’s 1971 version, which is still the best one among the bunch. While Kurzel’s “Macbeth” does not surpass Polanski’s version, it has its fair share of style and personality along with grim brutality, and you will appreciate it more if you are well aware of the mean-spirited core residing inside that Scottish Play.

This entry was posted in Movies and tagged Husband and Wife, Murder. Bookmark the permalink.