Sometimes I come across beautiful films which can instantly hold my gaze with their beauty and mood but somehow keep me from getting wholly involved in what or how they are about. I watch them with curiosity and admiration, but I also observe their wonderful visual moments and commendable filmmaking techniques behind them with a certain degree of detachment and reservation, and it takes some time for me to decide whether I actually like them or not.

My latest example is Hou Hsiao-Hsien’s new film “The Assassin”, which was recently chosen as Taiwan’s official entry to the Best Foreign Language Film at the 2016 Academy Awards. It is indubitably a gorgeous visual experience which may be admired and appreciated through multiple viewings, but its deconstruction approach to Chinese martial arts movies, which is also called ‘wuxia’ films, will require lots of patience and attention from you due to its murky and vague plot and characterization. The movie usually cares more about its spaces and objects rather than its characters, and it pays far more attention to what is unspoken than what is expressed verbally or physically.

Loosely inspired from the classic martial arts story “Nie Yinniang” written by Pei Xing during the 9th century, the movie gives us some basic background information at the beginning. It is the 7th century in China, and the Tang dynasty, one of the high points in the Chinese history, has been weakened during recent years. The emperor’s central government in Chang’an has had troubles in controlling several local governors around the kingdom, and these governors have been potential threats to the emperor’s power.

During the prologue presented in black and white film, we meet Nie Yinniang (Shu Qi), a young female assassin who has been trained by her Taoist nun master Princess Jiaxin (Fang-Yi Sheu). While she can swiftly dispatch her target as ordered from her master, Yinniang chooses not to kill her latest target because she comes to have a pity on the target’s infant child who happens to be right at the spot, and her master is not so pleased about this human decision because Yinniang’s target should have been eliminated for, uh, greater good. 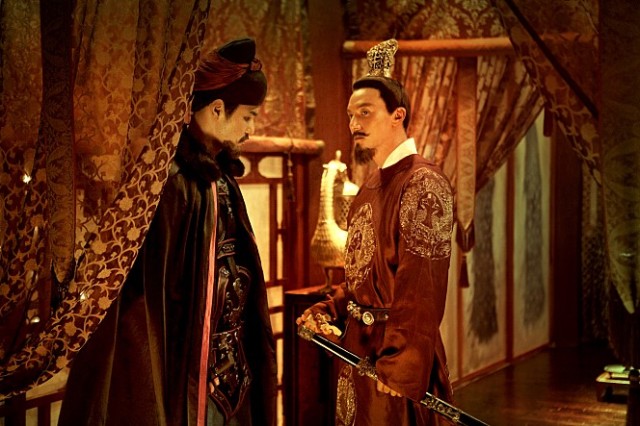 Yinniang is soon sent to a distant province called Weibo, and her new target is Tian Ji’an (Chang Chen), the powerful governor of this province who is also Yinniang’s cousin. We gradually gather that Yinniang and Tian Ji’an were once engaged but then happened to be separated from each other, and it is implied that Yinniang still has some feelings toward the man whom she could have married but now is supposed to kill sooner or later.

There are also other crucial characters in the story, but the movie does not tell us a lot about their relationships surrounding Yinniang and Tian Ji’an, and you will need to spend some extra time for deducing how they are actually related to each other (My Far-Flung Correspondent peer Jana Monji provides a useful diagram here). Besides the political matters of his region, Tian Ji’an has a little domestic problem between his wife Lady Tian (Zhou Yun) and his favourite concubine Huji (Hsieh Hsin-Ying), and we get acquainted with some of Tian’s ministers including Nie Feng (Ni Dahong), who is, this is not much of a spoiler, Yinniang’s father. There are also Princess Jiaxin’s twin sister, a lad who is only identified as ‘the mirror polisher’ in the end credits, and a very old man who can conjure a sort of black magic using his paper dolls.

Slowly moving from one situation to another, the movie is occasionally interrupted by action scenes, but you will be disappointed if you expect anything as exciting as “Crouching Tiger, Hidden Dragon” (2000). They are mostly brief and terse, and the camera often observes them from long distance under a dry, detached mood. Rather than moving human figures, we look more at sceneries surrounding them. We are relaxed, but we do not care a lot about what is going on for its characters. I must point out that the most impressive physical movement in the film comes from a palace dance performance scene, rather than any of its action scenes.

But I guess I should not expect something grand or exhilarating from the director/co-writer Hou Hsiao-Hsien, who has been known well for his subtle, elegant works including “Three Times” (2005). I did not react well to that film during my first viewing, but, once I accepted its low-key mood and slow rhythm, I liked it more during the second viewing although I was not still enthusiastic about it in contrast to many other critics.

In technical aspects, “The Assassin” is superlative with its sumptuous production design and costumes, and the cinematographer Mark Lee Ping Bin deserves praises for his masterful handling of lights and camera movements. While the movie confines itself in the screen ratio of 1.37:1, the camera fluidly and thoughtfully moves its gaze around spaces and objects on the screen, and the movie seldom feels stuffy despite its narrow view. The drapes and curtains frequently flicker like candle lights, and the camera sometimes feels like another character in the space whenever its view is softly blocked by thin fabrics of drapes. The score by Lim Giong, who received the Soundtrack Award at the Cannes Film Festival early in this year, is sparse but effective, and I like that subtle touch from soft, repetitive percussion sounds on the soundtrack.

But I still look at the movie with detached admiration instead of emotional involvement, and I am still scratching my head over its elusive human matters. Although “Three Times” is often opaque in frustrating ways, it focuses on its three simple human relationships one by one, so we get enough spare time for rumination as looking closer at each of them. In “The Assassin”, we merely fleet by its characters, and we do not get enough time to get the clear sense of how they interact with each other amidst the intricate connections between them.

Hou Hsiao-Hsien received the Best Director Award at the Cannes Film Festival for “The Assassin”, and he surely deserved it for his technical mastery clearly shown from the movie, but I am not so sure about whether his calm, static approach works with the genre elements he intended to hang around with. My mind went somewhere even while my eyes were fixed on the screen, and I found myself humming Franz Schubert’s piano trio piece used in “Barry Lyndon” (1975) as I did during my viewing of Apichatpong Weerasethakul’s “Uncle Boonmee Who Can Recall His Past Lives” (2010), another calm, distant work I did not entirely like. That was a good and bad thing in my opinion, and my current judgement is tipped a little to the former – for now.

This entry was posted in Movies and tagged Assassin, Assassination, Martial arts. Bookmark the permalink.