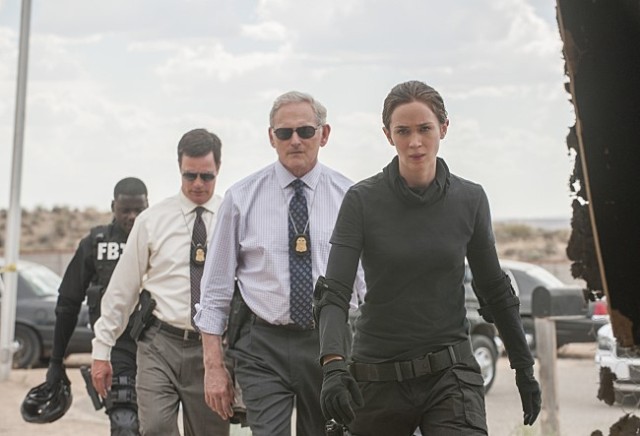 At first, the heroine of “Sicario” does not exactly know what kind of situation she gets involved into, and neither do we, though the movie gives us a little more information. As she comes to know more about what is really going around her, we get the glimpses of the War on Drugs around the Mexico-US border, and they are not pretty sights at all. Although I wonder whether some elements in the movie are purely fictional, there are other things reflecting that harsh and violent reality around the border, and they often gave me chills during my viewing.

The movie begins with the tense opening sequence unfolded in the middle of the latest operation led by Kate Macer (Emily Blunt), a young, idealistic FBI agent who is about to ambush the possible suspects of her kidnapping case along with her colleagues. While it quickly turns out that they have broken into a wrong house, they happen to notice something hidden inside the house, and then they soon realize that they have come into the house of unspeakable horror.

Although their shocking discovery is clearly connected with a powerful Mexican drug cartel operating around the Mexico-US border, there is not much Macer and her boss Dave Jennings (Victor Garber) can do at present, and that is the point where Matt Graver (Josh Brolin) comes in. While he is introduced as a mere ‘adviser’ to help them, it is apparent that this CIA agent is capable of doing more than giving some assistance. He is about to begin a covert operation to undermine the drug cartel in question, and, for some unclear reason, he requests that Macer should join his operation.

Mainly because she is determined to see the end of this case, Macer decides to go with Graver even though he does not tell everything to her as your average shady CIA guy. Before they fly to El Paso, Texas, she is introduced to his mysterious associate Alejandro (Benicio Del Toro), and this Mexican guy does not reveal much to Macer either, except that he seems to be haunted and motivated by something personal.

Right after arriving in El Paso, Macer participates in a dangerous mission along with Graver, Alejandro, and a bunch of tough soldiers under Graver’s command. A man who may provide them a valuable piece of information is currently held in Juárez, Mexico, and they are going to transport him across the border to El Paso despite the considerable risk and danger in the process. As they pass the border and then enter Juárez, the movie looks around the grim urban landscapes of the city along with Macer, and they look as realistic as what I saw from “Narco Cultura” (2013), a sad, bleak documentary film about the brutal rampage of drug crime in this unstable border city. One of the most memorable moments in that documentary shows not only how much close El Paso and Juárez are to each other as neighboring border cities but also how much different they are from each other like heaven and hell; while only 5 incidents of murder were reported in El Paso during 2010, no less than 3,622 incidents of murder were reported in Juárez during the same year – and there might be more than that.

While being unnerved by the disturbing sights on the streets of Juárez, Macer finds herself in a very tricky circumstance she must deal with caution. Especially after a very suspenseful moment around the border, she comes to have doubts on Graver and Alejandro’s questionable tactics, and she and her close colleague Reggie Wayne (Daniel Kaluuya) look at Graver and Alejandro with more suspicion and frustration as they are gradually led into a murky grey area where nothing is simple at all. Graver and Alejandro are untrustworthy to say the least, but they are probably the only ones standing between Macer and potential dangers around their operation, and she comes to learn that in a hard way when she accidentally notices a certain sign of peril right in front of her eyes.

As Taylor Sheridan’s screenplay continues to push Macer further into the dark, brutal, and ambiguous world of Graver and Alejandro, the director Denis Villeneuve steadily accumulates tension and agitation along the plot. Jóhann Jóhannsson’s dissonant score constantly amplifies the edgy nervous feeling surrounding the characters on the screen, and the cinematographer Roger Deakins, who may receive another Oscar nomination for his terrific work here in this film, serves us with a number of mesmerizing shots which effectively establish the barren atmosphere ominously hovering over the border region. During the climax part reminiscent of “Zero Dark Thirty” (2012), Deakins’ digital camera looks at Macer and others immersing themselves into the darkness below the wide, beautiful sky in twilight, and this memorable shot is more than enough for conveying to us the murky and perilous aspects of their risky mission to be executed.

The three main performers in the film respectively give strong performances to fuel its narrative momentum. Although Macer is essentially another uncharacteristic rookie character confronting harsh reality out there, Emily Blunt ably carries the film even when her character is put aside for a while later in the story, and Josh Brolin and Benicio Del Toro are also good as cynical men who have accepted what should be done in their dirty war for a long time. While Brolin has a juicy fun with his wily amoral character, Del Toro is both chilling and tragic as we see more of how much his character is driven by his own personal motive, and there is a disturbing but gripping sequence when his character finally gets a chance to settle his old score.

I am not sure that everything in the film works as well as intended (the subplot involved with a Mexican policeman and his family feels a bit too redundant and mechanical, for instance), but “Sicario” is still a solid gritty crime thriller film more satisfying than Villeneuve’s previous film “Prisoners” (2013), which I admired to some degrees but did not like it much. This is a tough stuff indeed, but it comes with striking moments to grip and agitate us, and its vividly overwhelming picture of crime and violence across the Mexico-US border is something you cannot forget easily after it is over.

This entry was posted in Movies and tagged action, Crime, drug, Murder. Bookmark the permalink.