In last month, I came across a New York Times article on Guillermo del Toro’s his private place called Bleak House, and it was one of the most entertaining articles I read during recent months. The article vividly described this special house packed with heaps of numerous collectible items including freakish wax figures and curious books and artworks, and I enjoyed watching some of them through the photos and video clip accompanying the article.

The insidious mansion in del Toro’s new film “Crimson Peak” is also full of many things as shrouded in its dark, ominous mood, and the movie is prepared well to have fun and thrill with its darkly gorgeous place as much as it can. Although it is disappointing to some degrees that it does not go further than a predictable exercise in Gothic romance horror, its house of horror is something you cannot easily forget, and the movie has a fair share of creepy entertaining moments generated through its unmistakable style and atmosphere filling every spot of the screen.

Like many Gothic romance stories, the movie begins with a young innocent heroine destined to meet a dark, tall stranger of mystery. Edith Cushing (Mia Wasikowska), the only daughter of a wealthy businessman in New York state during the early 20th century, has been trying to begin her author career under her father’s full support, but she is disappointed to see that, as a female writer, she is expected to write romance tales rather than ghost stories, which she prefers more due to one unforgettable incident during her childhood. Not long after her mother’s death, she saw her mother’s ghost during one night, and her mother’s ghost, who does not look nice at all, gives young Edith a warning she still does not understand even at present.

While she keeps trying hard for her career, there comes a man who sparks a romantic interest in her right from when they meet each other for the first time. He is Sir Thomas Sharpe (Tom Hiddleston) from Cumberland, England, and he comes to America with his sister for meeting Edith’s father Carter (Jim Beaver). Although Thomas’s business proposal associated with his invention does not impress Carter much, Edith finds herself attracted to Thomas, and she soon comes to spend more time with Thomas and his sister Lucille (Jessica Chastain), a frigid lady who certainly draws our attention with her striking first appearance at an evening social party.

Unlike Edith, we are not so oblivious to that suspicious aura surrounding Thomas and Lucille, and neither are Carter and Dr. Alan McMichael (Charlie Hunnam from “Pacific Rim” (2013)), a young handsome guy who wishes to be more than her close friend sharing a common interest with her. Against the wishes of these two persons who cares about her, Edith eventually marries Thomas, and then she moves to Alderdale Hall, Thomas’s family mansion in Cumberland.

Virtually emitting bad signs even before Edith passes its front door, Alderdale Hall looks like an ideal place to inspire her to write more ghost stories. Besides located in the middle of a wide, barren field, this mansion is shabby and decrepit in many aspects; we look up to a very big hole in the roof along with Edith, and then we learn that the mansion is being sunk into its red clay ground which was once the major source of wealth for Thomas’s family. Almost everything in the mansion looks old, dark, and moody without much light, and there is even a rusty elevator, which always makes creaky metallic sounds whenever it is operated. 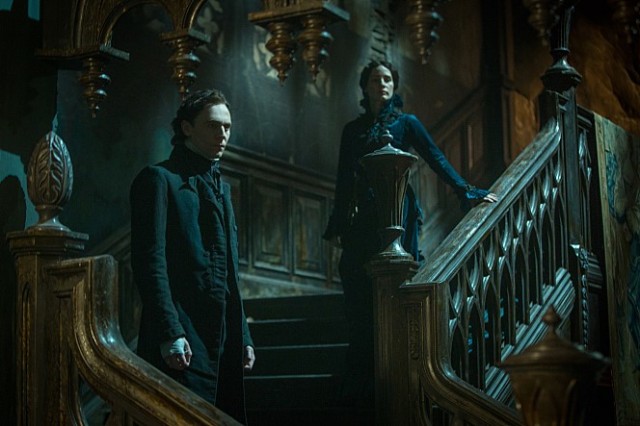 And Thomas and Lucille begin to look more suspicious than before. There is no one around Edith in the mansion besides them, and Lucille, who becomes colder to her sister-in-law than ever, is the one in the charge of its domestic businesses. She always carries a bunch of keys for many rooms in the mansion, and it looks like there is something in the mansion Edith must not discover. While Thomas is kind and generous to his wife as before, he often seems to be more occupied with enhancing his invention he is still working on, and Edith slowly begins to notice strange things around her – especially when she accidentally receives a letter not intended for her.

As a matter of fact, she was already warned again by her mother’s ghost before marrying Thomas, but she belatedly realizes the meaning of the warning. That creepiness hovering around Alderdale Hall becomes more palpable to her, and then she beholds very disturbing things, which clearly suggest that something very bad is hidden beneath the decaying façade of Alderdale Hall.

Effectively evoking many old-fashioned Gothic films, del Toro mixes various genre elements into his spooky cinematic space. Thomas E. Sanders’s production design is terrific to watch, and it is always imbued with malicious darkness thanks to the cinematographer Dan Laustsen. The three lead performers ably inhabit their archetype roles; Mia Wasikowska is believable as her character is cornered by a grave danger creeping onto her, Tom Hiddlestone is suitably brooding and courteous, and Jessica Chastain have several juicy moments as channeling Judith Anderson in “Rebecca” (1940).

As announced from its very beginning, “Crimson Peak” does deliver feverish moments of bloody terror around the finale, but the result is not as successful as it intends to be, and I was not wholly involved in its heavy-handed plot which sometimes tells and reveals too much to us. In spite of these problems and other ones in the film, I enjoyed its better things a lot, and I admire how enthusiastically del Toro fills his movie with details and some distinctive touches of his own. I was not that scared, but it is creepy enough to recommend.

This entry was posted in Movies and tagged Horror, Romance, Thriller. Bookmark the permalink.