Life and art playfully intersect with each other in “Clouds of Sils Maria”, an intriguing drama about an aging star actress who happens to find herself in an ironic turning point in her career. As she finds herself in the position exactly opposite to where she was a long time ago, we get a bunch of interesting scenes as the line between reality and fiction is frequently blurred on the screen, and the movie even has a sly self-conscious fun with itself as dancing around the plot which gets thickened in the stream of smart, tantalizing moments to savor.

Juliette Binoche plays Maria Enders, a middle-aged actress who entered her stardom 20 years ago through her breakout performance in a stage play written by acclaimed playwright Wilhelm Melchior. Since that turning point, she has built the career of a movie star with many other high points, and she is now going to Zurich with her young assistant Valentin (Kristen Stewart) for accepting an honorary award on the behalf of Melchior as his old friend, but then she receives the news of his sudden death as her train is approaching to Zurich.

While she feels melancholic about this sad news, Enders meets a stage director named Klaus Diesterweg (Lars Eidinger), who asks her to appear in his new production of that stage play written by Melchior. In this time, she will play the older lead character instead of the younger one she originally played, and Jo-Ann Ellis (Chloë Grace Moretz), a rising Hollywood star who has recently become quite infamous for her big scandal, will be her co-star in this production.

We get some basic information about the stage play in question as Enders and other characters talk about its synopsis and subjects during their conversations. It is a destructive romance tale between a young, attractive female secretary and her older boss who is helplessly drawn to her secretary and then eventually fallen into her doom, and Enders has a good reason to be nervous about accepting the older role in the play. Besides her own insecurity as an aging actress, she also remembers well how that role seemed to be demanding to her older co-star at that time, who died under a questionable circumstance a few years later. Some roles can be too close for actors to play as demanding them to show more of themselves with emotional nakedness in front of the audiences, and Enders is not quite sure about whether she can play that part well – or how that will affect her life and career.

In spite of her hesitation, she comes to accept that role anyway, and she and Valentin go to Melchior’s residence in Sils Maria to prepare for her role before the rehearsal in London. While occasionally enjoying the beautiful sceneries of the Alps including a stream of clouds flowing around mountains, Enders and Valentin read through a number of scenes in Melchior’s play, and we begin to notice the similarities between the play and Enders and Valentin’s relationship. They surely like each other as a generous employee and a faithful employer, but is there something more behind their close relationship? Or are they just adding a little authenticity to their read-through?

Wandering somewhere between “All About Eve” (1950) and “Persona” (1966), the movie maintains its neutral attitude as watching them having conversations on various things besides the play itself, which is viewed differently as Enders, Valentin, and other supporting characters provide each own interpretation on its story and characters. Enders’ view on her old character was initially critical, but then it is gradually influenced by Valentin’s more favorable view, and we see Valentin functioning as not only her companion but also her truth teller – or her young alter ego, perhaps. 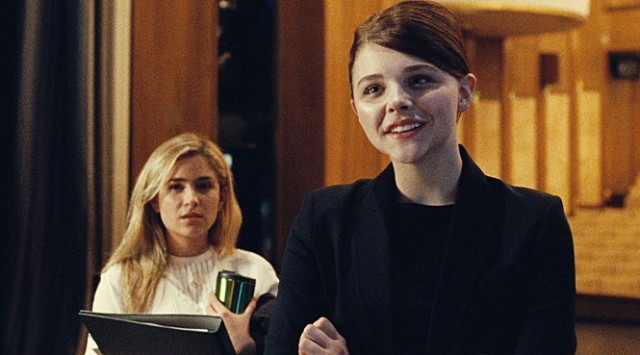 They also spend some time on getting to know a little more about Enders’ co-star, and the director/writer Olivier Assayas cheerfully make a fun of superhero film, celebrity gossip, and online journalism through Jo-Ann Ellis. With her droll supporting performance clearly inspired by Lindsay Rohan, Chloë Grace Moretz willingly goes along with the satiric tone of her several scenes, and our knowledge of her current status as a rising new talent certainly adds another layer to her performance as a young superficial actress with some talents.

Still, Juliette Binoche and Kristen Stewart are the center of the film, and the interaction between their performances is always engrossing to watch. Maintaining her usual graceful presence, Binoche is superlative in conveying us the inner turmoils growing inside her character, and her performance also reminds me of how long she has been in the movie business just like Enders. I noticed her for the first time through Krzysztof Kieślowski’s “Three Colors: Blue” (1993), and now more than 20 years have passed, but, as reflected by her luminous performance in this film, she remains as one of the most fascinating actresses of our time.

While Binoche is as excellent as expected, the real surprise of the movie comes from Stewart, who deftly presents herself as Binoche’s equal match on the screen. Completely free of that lazy, bored mannerism she endured during Twilight movies, Stewart shines in her terrific performance while having a good chemistry with her co-star Binoche, and it may be all the amusing for you to watch her character talking about celebrity scandal at one point, if you have heard about a certain recent news about her which also drew lots of attention from the media for its scandalous aspect.

“Clouds of Sils Maria” eventually arrives at the predestined destination through its anti-climactic epilogue which is a bit too long, but it is an elegant emotional journey handled with wit and intelligence, and I had an enjoyable time with the playful tone of its individual scenes. I still do not have any clear on what it is about on the whole, but, thanks to the director and his three wonderful actresses, I definitely had an interesting fun with how it is about.

This entry was posted in Movies and tagged Actress, Movie, Play. Bookmark the permalink.