German movie “Free Fall” is a nice film which could have drawn more attentions if it had been made 10 years ago. Thanks to notable films like “Brokeback Mountain” (2005), “The Kids Are All Right” (2010), and “Weekend” (2011), homosexuality has become a subject which can be handled more candidly than before during last 10 years, and that is the main reason why the movie feels like a late arrival in comparison although it is good enough to recommend.

In the beginning, everything seems to be going well for Marc Borgmann (Hanno Koffler), a young police officer undergoing a training course for his riot control unit. Although he really needs some improvement in his physical strength, that is just a minor problem he can deal with, and we see him trying hard as much as he can while going through the training course along with other young police officers at the police academy.

In case of his private life, he has been in a long relationship with Bettina (Katharina Schüttler), who is soon going to give birth to their child. Although they are not married yet, they recently decided to move together to a new house where they may begin a family life with their child in the future, and everyone around them including Marc’s parents is glad about that.

Meanwhile, Marc begins to get close to Kay (Max Riemelt), his roommate at the police academy. They were not that friendly to each other at first, but they get accustomed to each other while spending time together. At one point, they sneak out of their dormitory to enjoy their private time during one night, and we see them jogging together in a nearby forest mainly for improving Marc’s physical strength.

And then it becomes apparent that Kay has a certain feeling toward his roommate. After some indirect acts of flirting, he eventually approaches to Marc in a far more daring way when they are jogging in the forest as usual. That act of his surely startles Marc, who becomes further upset by the fact that he let himself swept along with Kay’s sexual advance. He tries to stay away from Kay, but he cannot get Kay out of his mind, and then Kay joins his riot control unit not long after their first sexual interaction.

Feeling more attracted to Kay, Marc eventually begins an affair with Kay while hiding it from Bettina. Their relationship looks like a short one to be terminated at any time, but the situation only becomes more difficult for Marc. While he continues his affair with Kay, his child is born at last, and Marc feels more pressured to see that he must make a decision in one way or another before it is too late.

Like “Brokeback Mountain” works as a universal love story about two tragic lovers, “Free Fall” works as a familiar drama about a man falling into an affair which brings him agony as well as pleasure. While Marc knows too well that his affair will definitely hurt Bettina a lot if she learns it, he hesitates to deal with his increasingly difficult problem, and he finds himself visiting Kay’s apartment again and again. He becomes more miserable and frustrated as trying to avoid the awakening of his sexuality, and, not so surprisingly, Bettina starts to be suspicious about what her man is doing behind his back as the estrangement between them feels more palpable even after the birth of their child.

The screenplay by the director Stephan Lacant and Karstan Dahlem takes predictable turns we can easily see from the distance, but it holds our attention through its believable characters. Its two lead actors play well along with each other on the screen, and a number of sex scenes in the film are handled with taste and sensitivity while conveying us the heated attraction between its two heroes. There are also a few expected moments involved with prejudice, and the movie wisely handles most of them with sensible restraint; homosexuality is no longer a taboo in Germany and many other advanced countries nowadays, and most of policemen in Kay and Marc’s precinct do not become hostile to Kay when he happens to get his sexuality exposed later in the story. They do not mind having a shower with him, but then there are always some people with prejudice no matter how much their society has advanced for the tolerance of minorities.

The movie eventually arrives at an inevitable point where Marc must be honest about himself regardless of what will happen in the end, and Hanno Koffler is especially good when things are falling apart for Marc as the devastating consequence of his hidden passion. While Kay is less characterized compared to Marc, Max Riemelt brings enough sparks into his character; it might have been a mere seduction for him at first, but it turns out Kay is really hurt by his lover’s indecisiveness, and he even makes a desperate attempt when he comes to Marc’s house as a rather unwelcomed guest. At the third main character of the story, Katharina Schüttler also gives a terrific performance, and she is heartbreaking to watch at times as her character copes with her worst fear; she instinctively senses something is wrong between her and her future husband after his first suspicious absence, but she also knows that the truth might be something she does not want to know at all.

While “Free Fall” is a good film with strong dramatic moments to notice, I must point out that it is bound to look tame compared to other recent films about homosexual characters. “Blue is the Warmest Color” (2013) went boldly into more daring areas as vividly presenting a dynamic relationship between its two lesbian heroines, and the same thing can be said about “Strangers by the Lake” (2013), which drew lots of attention for its literally naked depiction of its gay characters. It goes without saying that “Free Fall” is less distinctive in comparison, but it is still a well-acted drama about human passion and pain you may relate to, and I came to reflect amusingly on the universal aspects inside its story. Regardless of whatever attracts us on sexual level, we all simply cannot help ourselves sometimes, can we? 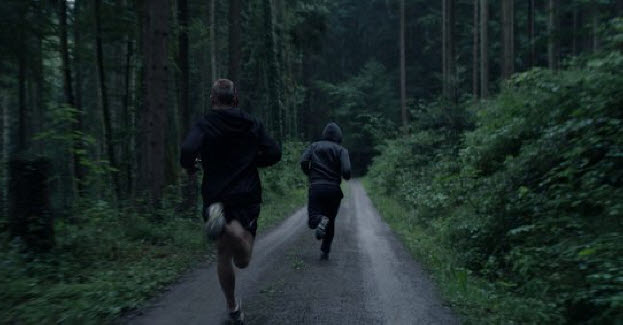 This entry was posted in Movies and tagged Affair, Husband and Wife, Police. Bookmark the permalink.