The first 30 minutes of South Korean film “The Wicked” work like a solid short film based on an insidious premise. We know something bad will happen in one way or another, and the movie increases its level of anxiety step by step as approaching to a certain point. It inevitably begins to lose its steam after that point, but it does not entirely lose its sense of dread, and it is also supported well by its chilling lead performance which deserves to be praised and recognized.

When we meet Se-yeong (Park Joo-hee) at the beginning, we can instantly sense that there is something creepy about this quiet young woman. Besides her anti-social behaviors which usually annoy and perplex others at her workplace, there are weird stories about this enigmatically ominous lass with the aura of Wednesday Addams, and we see one of them through the series of short flashback scenes in the film.

To Lee Seon (Na Soo-yoon), the boss of Se-yeong and her co-workers in the office, Se-yeong merely looks like an annoying new employee she has to deal with at first. When Se-yeong has screwed up one important task due to her lack of experience, Lee Seon chides Se-yeong like any office boss would, and, like any employee would in such a situation, Se-yeong passively promises to her boss that she will try harder to finish her task properly.

But then Lee Seon becomes a little meaner. She sarcastically asks Se-yeong whether she will be ready to give up one of her fingers if she cannot get the job done before PM 8:00, and, to her surprise, Se-yeong responds without any hesitation that she is willing to put her against that challenge. But she has one condition; if she wins, Lee Seon should be the one who will lose her finger. 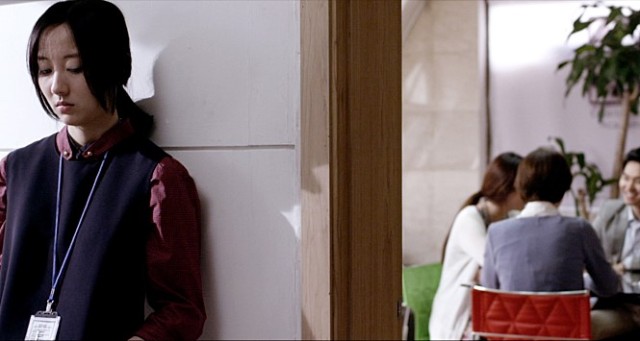 Lee Seon accepts this bet without much thought, but then it slowly creeps into her mind that she has probably made a big mistake. As the others in the office, who have been equally disturbed and annoyed by Se-yeong, tell their boss more about her, Se-yeong increasingly looks like someone you should never mess with in your whole life. At one point, she makes one of her colleagues very uncomfortable as casually telling about how one of her close schoolmates came to have an unfortunate accident just because she was obsessed with that schoolmate’s left-handedness. She also seems to see through others and know everything about them; she embarrasses her boss in front of others while blatantly exposing something her boss does not want to talk about, and we get a spooky moment in which she gives a menacing warning to someone whom she has probably never met in person. How can she possibly know so many things about that person in question?

As others leave the office one by one, Lee Seon becomes more nervous than before. Only she and Se-yeong are left in the office now, and it becomes quite possible that Se-yeong can finish her work before the deadline – and it is also quite probable that she will literally stick to her words, regardless of who should give up her finger in the end.

Now I am not going to tell you more about the plot, though I think most of you already have a pretty good idea about what will happen in the end of this tense situation. The director/writer Yoo Yeong-son did a competent job of dialing up the degree of suspense smoothly along the scenes of this part, and he also provides a number of unnerving scenes which will make some of you cringe for its clinical presentation of body mutilation. One of those scenes involves with broken ceramic fragments, and it is frightening to watch an unspeakable act of self-mutilation even though there is not much blood on the screen.

The latter half of the movie revolves around the mysteries behind Se-yeong. Sometimes she looks like one of those scheming, obsessive female aggressors we have seen from countless Hollywood thriller movies, but then it is also suggested that she may be a lot more than an unhappy woman with pathological need to be liked and loved. At one point, she tells that she has been destined to bad luck since her birth, and it seems she has some power to make unfortunate things happen to others, but can we really trust what she says?

The movie constantly toys with that unreliable aspect as Lee Seon tries to get more information about her opponent during its second part. She searches for several people who unluckily encountered Se-yeong in their past, and, as they tell their stories to Lee Seon, it becomes more apparent to her and us that Se-yeong is a malicious force to reckon with. As one character warns to Lee Seon, it may be wiser to avoid her than try to deal with her, but then Lee Seon eventually arrives at a certain place which may contain something more than she can possibly handle for herself.

The ending is a letdown compared to the rest of the story, but I had sort of a dark fun with the movie, which does not look that cheap although it was produced with the small budget which was less than $ 30,000. While revealing little about her character, Park Joo-hee gives an engaging performance which is both scary and enjoyable to watch; as watching how much evil Se-yeong can be, you cannot help but be fascinated with her dark nature – and you come to fear for whoever happens to be around her. The movie is not wholly successful, but it is worthwhile to watch just for her performance, and you may hope for better things to come for this relatively unknown South Korean actress. 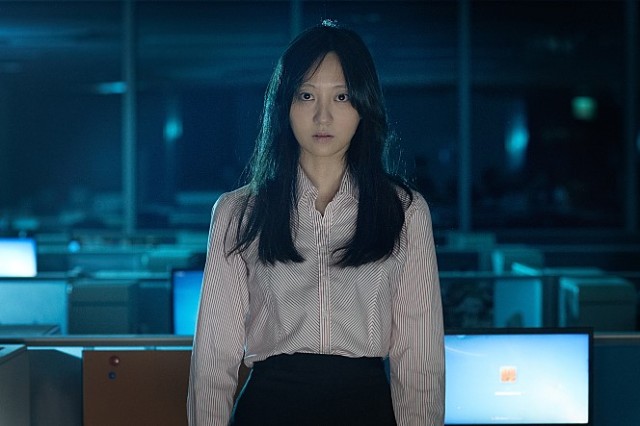 This entry was posted in Movies and tagged South Korean Film, Thriller. Bookmark the permalink.