During the summer of 2009, I happened to read three Tom Ripley novels written by Patricia Highsmith, and it was one of the most entertaining reading experiences I have ever had. While it was chillingly compelling to see how its smart, amoral criminal hero got away with his crimes including cold-blooded murders, his odd relationships with other characters who unfortunately happen to get involved with him was another fascinating thing to observe in these crime novels. For example, Ripley and his dying opponent in “Ripley’s Game” hate each other’s guts from the start, but they also get closer to each other as becoming partners in crime through Ripley’s fiendish scheme, and it is intriguing to watch how mutual attraction and repulsion are intertwined with each other with no clear lines in their bizarre relationship.

“The Two Faces of January”, which is based on Highsmith’s novel with the same name, also gives another interesting example of two men who get involved with each other through crime, but it hesitates to go deeper into its characters. There are several good moments of tension and suspense as its plot thickens, but the movie ultimately fizzles around its third act, and we are only left with the impression of something which could be more interesting in a better film.

It is 1962 in Greece, and Rydal(Oscar Isaac) is a young American guy who has worked as a freelance guide for tourists. As a well-educated guy who can speak several languages including Greek, he looks like a good tour guide, but we also see his small criminal activities for earning extra money. Besides language barrier, many tourists usually have difficulty with foreign currency, and we see how he exploits that during one brief scene in which he swindles a little money from an American girl he has been getting along with. 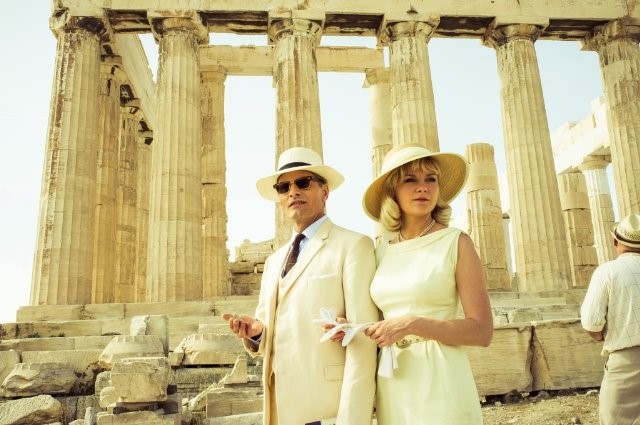 And then he comes across one American couple, and they instantly draw his attention. Chester MacFarland(Viggo Mortensen), who looks like some wealthy financial guy enjoying his Europe vacation with his young wife, also notices Rydal, and they soon get acquainted with each other through Chester’s wife Colette(Kirtsten Dunst). Rydal becomes their helpful tour guide as they go around a local market, and he and Mr. and Mrs. MacFarland spend some good time together in the evening although Chester is a little suspicious about Rydal.

But it turns out that Chester is no better than Rydal as a guy who has been hiding something behind his back. Not long after he and his wife come back to their hotel room, he gets a sudden visit from an American private detective, and it is revealed that he and his wife ran away from US because of his financial crime. While trying to wiggle out of this difficult situation, Chester unintentionally kills that private detective, and then he happens to come across Rydal when he is trying to move away the private detective’s body. Chester lies to Rydal that the private detective just loses his consciousness, so Rydal comes to assist Chester while not realizing that he has become Chester’s accomplice, and he also lets Chester and his wife stay at his residence for a while.

Because it takes several days to prepare their fake passports for getting out of Greece, Chester and Colette go to Crete with Rydal for evading the police search. While they become a little more relaxed, Rydal and Colette come to spend more time with each other, and Chester becomes suspicious about what is possibly happening between them. As the older guy in this triangle, he becomes naturally jealous, but he only finds how helpless he is when he goes out alone for looking for Rydal and his wife. In the case of Rydal, he becomes angry about Chester after he realizes how serious their situation really is, but he has no choice but to stick to their plan for getting out of the trouble as soon as possible.

The movie did a good job of building up tension around its three main characters during its first half. The cinematographer Marcel Zyskind provides a warm, sunny Mediterranean atmosphere with the nostalgic touches to be expected from its period setting, and Alberto Iglesias’ anxious score, which is reminiscent of his works in Pedro Almodóvar’s films, effectively conveys the unsettling feelings beneath the surface during a number of key scenes in the film.

The actors in the movie are engaging in their depiction of the unstable dynamics between their respective characters. While Viggo Mortensen and Oscar Issac take the center of the story as two men increasingly opposing each other, Kirsten Dunst also holds her own place between her co-stars as another important part of the story, and she has a sad scene which reveals how much her character has felt frustrated and suffocated behind her chirpy façade.

Things eventually culminate into a certain irreversible incident which leads to more conflict between Chester and Rydal, but the movie begins to lose its steam after this point. The director/screenplay writer Hossein Amini, who previously wrote the screenplay for Nicholas Winding Refn’s “Drive”(2011), attempts to add an Oedipal element to the antagonizing relationship between his characters, but it is less successful than intended while feeling too obvious right from the beginning, and its finale is not exactly convincing because of that problem.

“The Two Faces of January” is not a bad film when being judged on technical aspects, but it is still an unsatisfying work which made me want to read the novel someday when it was over. During its end credits, Amini shows his personal thanks to Sydney Pollack and Anthony Minghella, and that certainly takes us back to “The Talented Mr. Ripley”(1999), which was incidentally directed Minghella and produced by Pollack. That film was surely less edgy compared to Highsmith’s novel, but it was a compelling adaptation which presented an interestingly different version of Highsmith’s famous criminal hero, and you may have a better time if you watch it instead.

This entry was posted in Movies and tagged Fraud, Husband and Wife, Murder, Thriller. Bookmark the permalink.