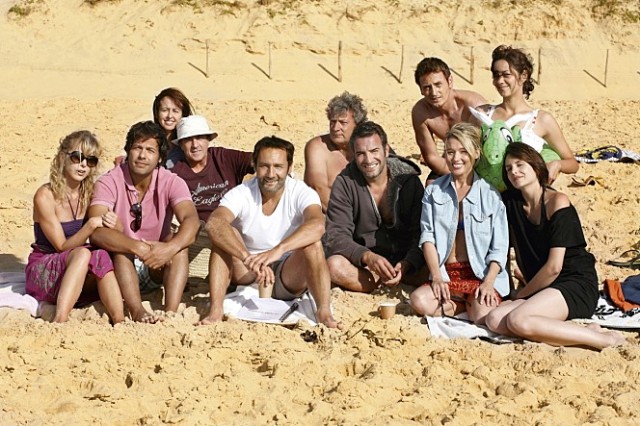 French film “Little White Lies” starts its story with a familiar setting. With a bad news hovering over them, they spend some time together as before, but it turns out they have each own problems to deal with besides that bad news. It looks fine at first while they try to enjoy themselves, but they eventually fret over their problems while not openly talking about them in front of others, and one inconvenient truth becomes more palpable among them as the time goes by.

Its opening scene beginning at a night club during its late hour shows how their friend happens to have an unfortunate accident. Not long after getting out of the place where he probably spent the whole night with others, Ludo(Jean Dujardin, who appeared in this film before his Oscar-winning performance in “The Artist”(2011)) is suddenly hit by a truck as he is going back to his home during early morning, and we see his close friends arriving at the hospital to see him in the next scene. Concerned about Ludo’s critical condition, they consider cancelling their upcoming annual summer vacation for a while, but they eventually decide to stick to their original plan. After all, there is not much they can do for their injured friend at present, and he is alive while being on the way to recovery, isn’t he?

A few days later, they go to a beach town where they have spent their summer vacation together for years. While his friends do not see any problem with the vacation house belonging to him, Max(François Cluzet), an affluent business man with lots of petty insecurity bubbling inside him, keeps being grouchy about several trivial things including the untidy lawn in front of the house. Although he is supposed to be relaxed along with his friends, he routinely monitors his business place through his laptop computer connected to a number of CCTV cameras, and that becomes a sort of running gag throughout the film.

And he has a little personal problem with Vincent(Benoît Magimel), who confides to him that he has been recently attracted to Max. Max is not so pleased about this embarrassing confession from his close friend who has massaged him for years, and Vincent apologizes and promises that he will keep his mouth shut about this matter, but the awkwardness between them is apparent to everyone in the vacation house – including their wives.

Meanwhile, Antoine(Laurent Lafitte) has been struggling with his recent separation with his longtime girlfriend Juliette(Anne Marivin). While he still has feelings toward her, she sends a text message to him for some reason, and he does not know how to respond to that. That results in an amusing scene in which he keeps seeking advices from his friends, and then we get a hilarious moment when he gets distracted by his girlfriend’s subsequent response in the middle of his boat driving lesson.

In the case of Éric(Gilles Lellouche), he also comes to face a relationship problem of his own when his latest girlfriend Léa(Louise Monot) decides not to spend the vacation with him. He has been rather careless about his women while getting all the fun and pleasure from them, but now he belatedly realizes how much he loves and needs Léa, and he wonders whether he can get the second chance if he tries.

Like Éric, Marie(Marion Cotillard) has been living her life freely as she wanted, but there is something empty growing inside her, and she does not feel good about that. When her latest boyfriend comes to the vacation house later, it becomes clear that their relationship is approaching to the end, and she already feels hurt even before he suggests that they should end their relationship for each other.

There are many other small and big happenings in the movie as they continue to spend their summer days, and the director/writer Guillaume Canet, who previously made compelling thriller film “Tell No One”(2006), leisurely moves between comedy and drama as maintaining the unhurried pace of his film. While it takes some time for us to get used to its slow rhythm, the interactions between its well-rounded characters are interesting to watch, and a number of familiar pop songs on the soundtrack are effectively used along with those sunny beach scenes in the film.

The cast assembled for the film gives a solid ensemble performance. While relatively more notable performers like Marion Cotillard and Jean Dujardin surely draw our attention from the start, they and the other actors including François Cluzet, Gilles Lellouche, Benoît Magimel, Pascale Arbillot, Laurent Lafitte, Pascale Arbillot, and Joël Dupuch comfortably hang around together in their natural presence, and we can instantly believe that their characters have known each other for many years. Cluzet, who has always been noticed for his resemblance to Dustin Hoffman by me and others, is particularly good when his character regretfully comes to see how much he behaves like a jerk in front of others at one point, and Joël Dupuch, who plays a local oyster farmer who has known Max and his friends, has a crucial moment as a truth teller who pointedly reminds other characters of what they have been overlooking.

Since its release, “Little White Lies” has been compared to “The Big Chill”(1983), which has been the prime example for many movies wherein characters happen to gather together and then examine their relationships and lives through their interactions. The movie has enough amount of good moments to distinguish itself, and, though it feels a little too long at times(its running time is more than 2.5 hours), the chemistry among its cast members constantly holds our attention, and it steadily moves along with them until it eventually arrives at the ending which may initially feel contrived but is appropriate for what has been silently built up along its plot. It takes its time for letting us to know and understand its characters more than before, and we can all agree that the movie earns that kind of ending. 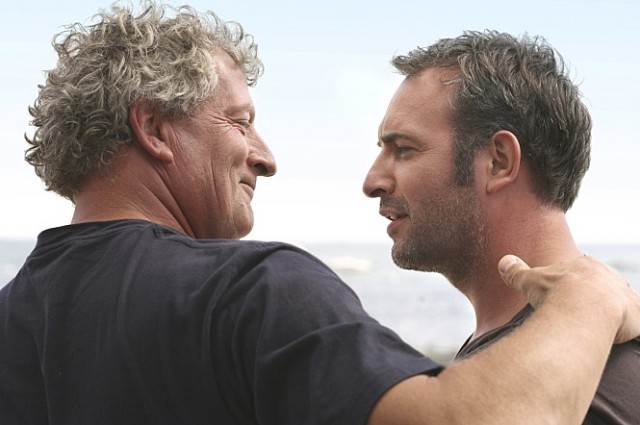 This entry was posted in Movies and tagged Accident, Beach, Friendship, Husband and Wife, Vacation. Bookmark the permalink.