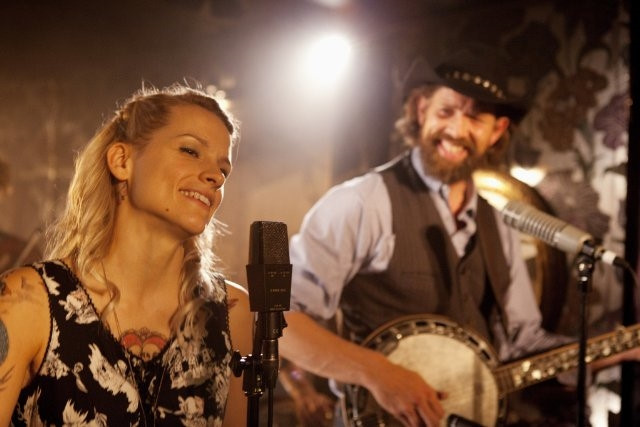 Although I am not so familiar with country songs or its cousin bluegrass songs, I enjoyed the soundtrack of “The Broken Circle Breakdown”, and I am listening to it while writing this review. Starting with its main song “Will the Circle Be Unbroken”, the movie decorates its melodramatic story with many other good songs, and the various emotions ranging from joy and happiness to sorrow and bitterness are whirled around them in its soulful mix of life and music.

An interesting thing about the movie is that its background is not America but the Flemish areas of Belgium. It feels a bit odd at first when you see the American bluegrass music mingled with the Flemish background, but this mix somehow feels natural as we are watching its main characters’ performances, and, considering their flawless delivery of American lyrics, I think they can perform well in US without any problem.

And their tumultuous life story can inspire at least one decent bluegrass song to be sung. It was a love at first sight when they came across each other, and they passionately threw themselves into love and music. They experienced bliss and happiness while they lived together, but then they were struck by a sudden tragedy, and then they hurted each other while struggling with resulting grief and sadness. More sadness along with bitter regret hangs over them in the end, and music naturally comes as a tool for expressing how they feel.

The movie looks here and there around their life story in its non-linear narrative, and we gradually get to know about them step by step. When bluegrass banjoist Didier Bontinck(Johan Heldenbergh) happens to meet tattoo artist Elise Vandevelde(Veerle Baetens) during his visit to her tattoo shop, they are quickly drawn to each other, and then, after many moments of their heedless passion, Elise announces to Didier that she is pregnant. Didier, a care-free musician who has never imagined of a settled life, is not very pleased about this news at first, but he eventually changes his mind, and they become a happy family with their young daughter Maybelle(Nell Cattrysse). 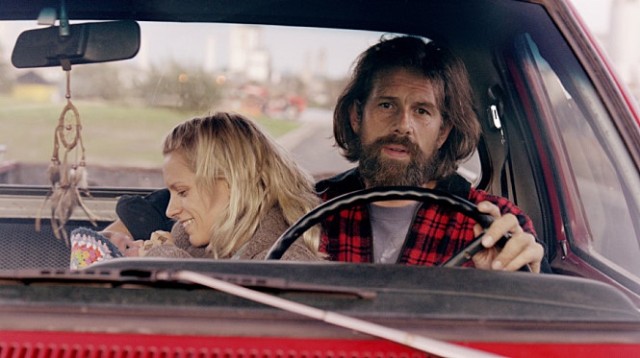 But, as already shown around the beginning, their happiness is unfortunately broken by Maybelle’s severe leukemia several years later. She eventually dies, and that puts lots of strains on Didier and Elise’s relationship as they try to deal with their pain and grief in different ways. As an idealistic atheist, Didier tries to move on while accepting that their daughter is now gone forever, and, as a pragmatic believer, Elise wants to believe their daughter is still with them.

The non-linear narrative structure of the movie feels confusing at times, but the director Felix Van Groeningen, who adapted Johan Heldenbergh and Mieke Dobbels’ stage play with his co-writers Carl Joos and Charlotte Vandermeersch, rolls his movie along the dynamic emotional flow of his main characters. Groeningen and his editor Nico Leunen deftly go back and forth between many contrasting moments surrounding Didier and Elise, and the resulting mix is a striking and dazzling clash/harmony of emotions. The cinematographer Ruben Impens fills the individual scenes with distinctive atmospheres, and Bjorn Eriksson’s score in bluegrass style is nicely mixed with songs to reflect the mood and feelings on the screen.

Johan Heldenbergh, who wrote the stage play and also performed in the play, and Veerle Baetens are effective as the emotional anchor to hold our attention as two different people attracted to each other for their differences and then estranged from each other for the same reasons. While they are constantly convincing amidst the different modes of their characters, Heldenbergh and Baetens are also good singers who ably express the feelings behind their music performance scenes, and they are especially poignant to watch when they sing “If I needed you” together on the stage. It initially looks like a mere performance, but we come to feel something going on between them, and Baetens, who received several awards including Best Actress award at the European Film Awards for this film, shines while matched well by the sense of slow-burning inside Heldenbergh’s performance.

Heldenbergh and Baetens occupy the center throughout the film, but young actor Nell Cattrysse holds her small place well among her adult co-actors; her hospital scenes are handled with sensitivity and care, and it never feels like overwrought tear-jerking moments. The actors playing Didier’s band members are usually placed in the background, but they are colorful additions to the story none the less, and there is a small but warm feel-good scene in which they wholeheartedly welcome Maybelle after she returns to her home with her parents.

“The Broken Circle Breakdown” was recently Oscar-nominated for Best Foreign Language Film, and, though I think it is a good film as many people said, I do not think it is the best one in the bunch compared to its fellow nominees including “The Great Beauty”(2013) and “The Hunt”(2012). Its criticism on a certain American policy on clinical research around 2005 feels too blatant and unnecessary, and I particularly have a mixed feeling about an emotional outburst on the stage during its second half; even though you can clearly feel the pain and anger from the character exploding with an angry diatribe against God and belief, this jarring moment does not work well with other parts of the film while almost ruining the narrative flow.

Nevertheless, “The Broken Circle Breakdown” still remains as a sincere and touching movie equipped with good performances and excellent soundtrack. I think that aspect will appeal to many Academy members despite its notable weak points, and it will probably win an Oscar in the upcoming ceremony in March. Like many good country songs, it tries to tell us a bittersweet life story of love and heartache, and, as far as I can see, it sings fairly well.

This entry was posted in Movies and tagged Husband and Wife, Musician, Parents, Tattoo artist. Bookmark the permalink.