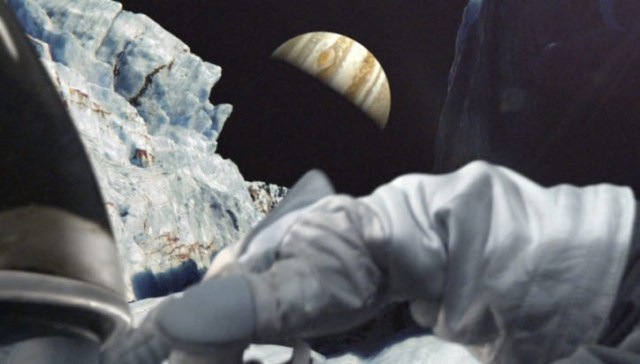 When I heard about “Europa Report” at first, it looked like one of those ‘found footage’ horror films, and it really is. The movie mainly revolves around the video clips from a doomed space mission(this is not a spoiler at all, by the way), and you can easily guess that the main characters in the spaceship will be dead one by one as their situation gets worse and worse. And then there will be none, and that is the end of their story.

But don’t worry, folks, because the movie is a thoughtful hard SF movie which happens to wear a horror genre and I was entertained and intrigued by its interesting goodies. While making a good SF story with a touch of horror, the people behind the movie really cared and thought about how a manned space mission beyond the moon will look like and what its members will see and experience during their risky mission, and that is the main reason why several terrifying moments in the movie come to us as the effective moments of horror supported by its considerable realism.

You probably remembered that the scientists reported the existence of water below the thick ice plate of Europa, Jupiter’s fourth largest moon, in November 2011, and the movie was inspired by that real-life science news. Because the existence of water implies the possibility of life-forming environment, a special space mission was eventually initiated in the future not so far from the present, and then six astronauts embarked on their long journey to Europa with their big spaceship aptly named Europa One. 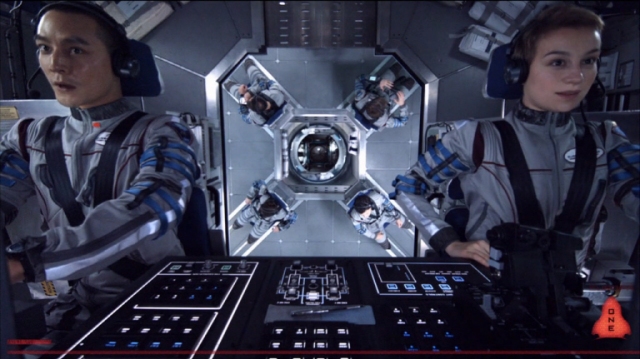 The movie tells their doomed journey in non-chronological order. We see that something unfortunate happened after 16 months, and then we are told that everyone on the Earth, including Dr. Samantha Unger(Embeth Davidtz) who was the supervisor of this mission, was upset and perplexed when the constant communication with the spaceship was suddenly disconnected around that point. Everything looked all right from the preparation step to the launch, and the mood in the spaceship was optimistic even when they were quite farther from the Earth than any other astronauts in the history, but then they were gone forever.

The movie is presented as a sort of special documentary produced after the video clips from Europa One were finally transmitted to the Earth to reveal what happened to the astronauts after that disconnection incident. While looking around the spaceship and the daily routine of the astronauts through many digital video recording equipments placed inside and outside the spaceship, we get some background scientific knowledge from Dr. Unger and other two scientists played by Dan Fogler and Isiah Whitlock Jr. Fogler, who has been usually cast as comic characters, is as serious and convincing as any passionate scientist should be when he explains the geographical details of Europa to us, and some of you will probably appreciate how much the movie is based on the scientific facts through lots of consults with several technical advisors during the pre-production period.

We also get to know about our ill-fated astronauts as observing their daily life in the spaceship, and the movie wisely presents them as the resourceful professionals trained and prepared for their long, difficult mission full of unforeseen possibilities. Even when they are devastated by a terrible incident and further depressed by the fact they are virtually alone due to the broken communication with their mission control center, they decide to continue their mission, and none of them loses their control at all even when their situation looks pretty hopeless to them as well as us. They are indeed afraid, but they try their best as trained professionals, and we come to care about them even though we already know what will happen in the end.

Like the movie itself, the characterization is finely tuned to the realistic level, and the cast gives solid performances. David Wu and Anamaria Marinca are the pilots of the spaceship, Michael Nyqvist and Sharlto Copley are two engineers taking care of the spaceship, and Christian Camargo and Karolina Wydra are the scientists ready to find anything interesting in Europa. The cinematographer Enrique Chediak does an excellent job of presenting the characters and their drama in the limited spaces, and the movie seldom feels stiff or stuffy even though we are well of aware of their confined state.

While establishing the solid ground for the story written by Philip Gelatt, the director Sebastián Cordero gives us some time to appreciate the wonderful sights in his film. With the help of Oscar-winning production designer Eugenio Caballero, Europa One feels as real as NASA space shuttle, and the landscapes of Europa are presented with realistic wonder as the astronauts explore their alien environment day by day. There may be some danger lurking somewhere in the planet, but they are curious about what valuable knowledge they can get none the less, and they are willing to take one small step forward into the unknown to learn more about the universe – and ourselves, perhaps.

Not long after an enchanting visual moment when a robot equipped with camera is sent below the ice plate of Europa, it becomes increasingly possible that there is something dangerous, and the situation become far more tense for the characters as their chance of returning safely to the Earth is decreasing. What will be revealed around the finale will be not that surprising to you, but the movie thankfully does not overplay it during its somber ending which asks us about the value of the knowledge and its cost we have to pay sometimes while reaching for it.

“Europa Report” is a small SF film based on one interesting idea, and it accomplishes as much as intended with its small budget. I am getting tired of found footage movies in these days, but sometimes we get good ones with more creativity, and this movie is one of them. I enjoyed its realistic details, and I was again reminded of one frightening thing I once observed from my favorite film “2001: A Space Odyssey”(1968); it is really horrifying to be floated alone helplessly in the middle of the space, you know. 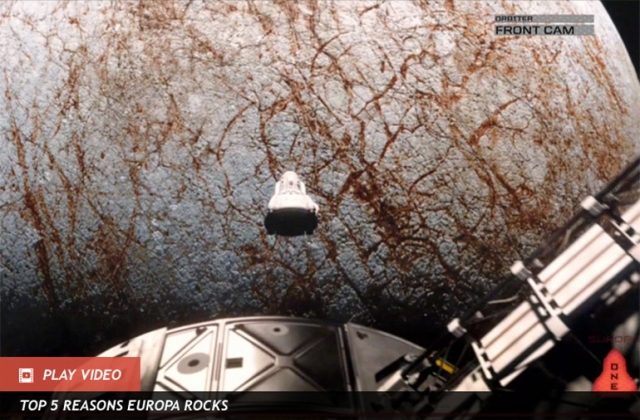