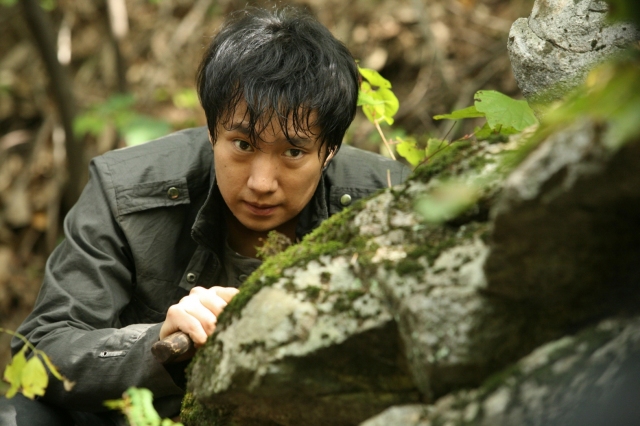 After so much hoopla before its release, “Moss”, a much-anticipated Korean thriller of 2010, turns out to be very, very disappointing in almost every way you can imagine due to the fatally misguided direction. It is lazy, incompetent, and, above all, not compelling at all. Despite some good basic elements of a thriller in the screenplay, it is more close to the ennui of the bright summer days in a country town, and, boy, the running time is more than 2.5 hours even if you exclude the end credit.

One of the main problems is immediately shown to us from the very first sequence; it explains about 50% of the mystery so thoroughly that I even wondered whether I came in after the midpoint of the story. In less than 25 minutes, you get nearly everything you need for drawing the outline of a big picture, and, believe me, I do not spoil your entertainment even if I describe what happens during this prologue in the next paragraph.

Instead, I’ll just say that we are introduced to two main characters and are informed about their past which is not so clean. One is the rural cop(Jae-young Jeong) who is good at the violence as well as the manipulation. The other one, Mok-hyung(Jun-ho Huh), is a deeply religious and idealistic man who was betrayed by his peers in his church and got imprisoned after that. We come to learn about how they met each other, how they collaborated with each other, and how they started their secret plan that leads to the creation of their small exclusive community in the rural mountain area.

No, neither of them is our hero. He is Hae-duk(Hae-il Park), the estranged son of Mok-hyung. Mok-hyung left his wife and his son a long time ago, and he has been a lot more like a stranger to his son. Nevertheless, after getting a message, the son comes down to some small, quiet village where his father had led a reclusive life.

He sees his father’s body in the shabby room of his house. He attends the funeral with other village people. He senses that something is fishy about with his father’s demise as well as the village itself. He begins his own search for the truth, and the things get complicated when he drags in the prosecutor(Jun-sang Yu from “HaHaHa”), with whom he had an unpleasant incident resulting in the recent social downfall of both. 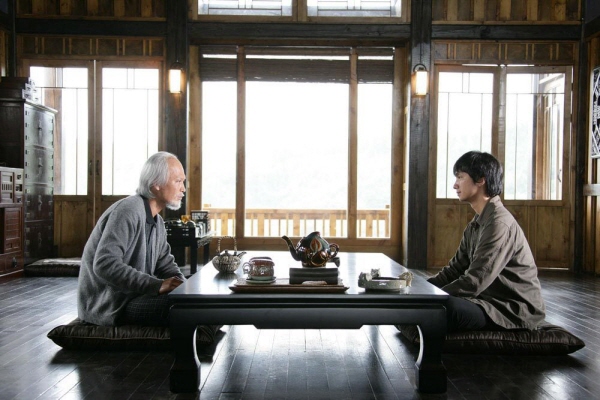 Because the movie already makes us two or three steps ahead of Hae-duk, there are a few reasons for us to be interested in his investigation. It is quite apparent that the cop, now the head of the village(and still Jae-young Jeong), is a scheming man who knows and controls everything in the town. His house is located on the hill where he can look down on the village, and it even has the switch for the big lighting equipments in the village, not so different from what you see at the baseball stadiums.

I know an effective thriller can be made with hiding little from the audience. Many good thrillers have their strength in how to get the finale, not in the ending itself. However, “Moss” is disjointed in its approach. After handing out a lot of crucial informations during the first half, it still hangs on one simple mystery while simply going straight to the predictable finale. The tension is desiccated and we lost our interest as a result. And a cheap twist not in the original work does not makes a little of sense at all; it feels more like a tacked-on plot device. Okay, we were fooled, so what? Does it make the story any difference? And how does that scheme work? How can it fit into the whole picture? There may be an explanation, but I could not feel it and I am still baffled about it.

If the movie were faithful to a popular Korean comics it was based on, even that ending would not be such a big problem. Out of curiosity, I checked several pages of it and I found it very engaging and full of cinematic possibilities. It is the dark portrait of the insidious side of human nature, and the grey world where nobody is entirely clean. Many people interpret it as the allegory of modern South Korean society, but there is an universal aspect in the story in that it depicts the individuals trapped and frustrated by the corruption and many other negative sides of the society. 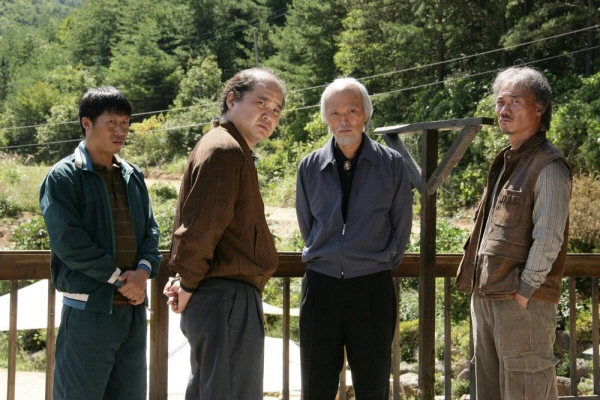 The story of the original work is convoluted with the flashbacks(one of them is the prologue sequence in the movie) and the surprising revelations while the background is drenched with the evil influence hidden inside. A frustrated, confused, and flawed character is surrounded by the colorful characters, and they are strikingly, and sometimes grotesquely, depicted in broad touches. With this fabulously twisted noirish setting, you can swallow any ending no matter how preposterous it is.

You don’t have to be 100% faithful to the original work to make your own movie, but the director Woo-suk Kang does not provide anything intriguing enough to substitute its unforgettable qualities after his thoughtless deconstruction. By making the storyline far more straight, he and the screenplay writer Ji-woo Jung completely eradicate the most compelling thing in the origianl work, and the sense of confusion and frustration is completely lost. With too much and too early explanations, the movie feels redundant and saggy in a desperate need of trimming the running time(163min). The sense of the darkness pervading the pages is vanished on the screen, and the movie is pathetically stuffed with the cheap gags every 5-6 minutes. As a matter of fact, I was so bored that I checked that pattern with my wristwatch while enduring the second half of the movie. We all know how Korean country town can be really creepy and humorous in Joon-ho Bong’s “Mother”; this is quite a degeneration.

The vivid characters and their intricate relationships are literally butchered in the movie version. The good cast is wasted on this bland, wretched result. I saw some of them in other movies, and I know they are good, talented actors. Unfortunately, they are burdened with the bad script. Their performances are inconsistent or awkward to say the least. Hae-il Park is nicely cast as a struggling hero, and Jae-young Jeong has some presence as the arch-villain, but, like all other actors, they are victimized by one-dimensional characters. Jeong was reported to say during the interview that he didn’t regard highly of Brad Pitt’s performance in “The Curious Case of Benjamin Button” because it was just an actor playing an old man. Sir, in case of yours, you’re just a bully with nothing changed after so many years except lots of make-up. 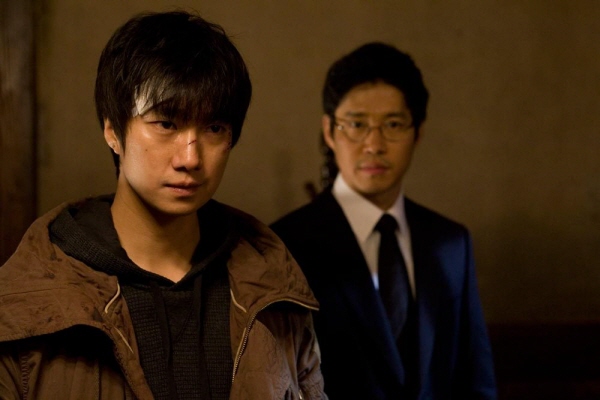 The deliveries of the lines is so clumsy that they sound pretty much like the first day of the script reading. It would not make any difference if they were reading the textbooks aloud. The movie is currently shown with English subtitle in Seoul, and I envy non-Koreans who will be buffeted by the subtitle from this distracting sound and fury.

Woo-suk Kang has made some entertaining commercial films in the past, but, after the big success of “Public Enemy”(2002) and “Silmido”(2003), his recent output were unsuccessful in case of the quality. Two sequels for “Public Enemy” were far inferior additions to the entertaining original, and “Hanbando”(2006) was one of the most atrocious Korean movies in the 2000’s. He said he chose to direct this movie because he needed some change, but the outcome is a turgid, uncharacteristic adaptation due to his delinquency in his own comfort zone. Instead of fully utilizing the possibility of a wonderful country noir, It becomes just another story of simple confliction between the good and the evil with the cardboard characters. I could not care about the story, let alone the characters. How can it build the suspense from that?

I remember Kang saying two years ago he was shocked by Christopher Nolan’s massive hit “Dark Knight”, and implying he learned a lot from it. Well,  it turns out Kang’s test score is poor despite the long, long answer he has given. Hitchcock said the suspense is like watching a time bomb hidden below the table; “Moss” has only some spare parts of the bomb below itself to bore us. 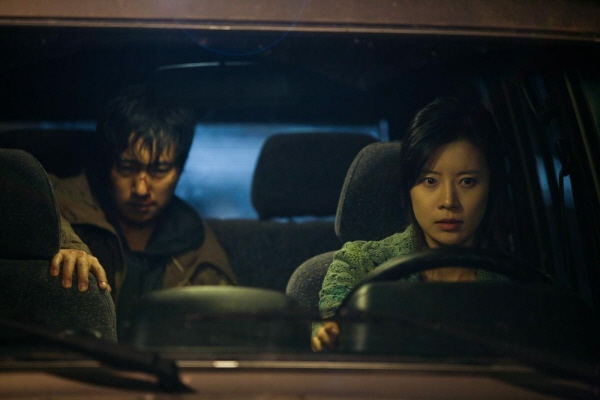 This entry was posted in Movies and tagged Country, Murder, Religion, Thriller. Bookmark the permalink.