Surprisingly to me, “Inception” is a small movie when viewed objectively from the outside. The story is not ground-breaking; it’s in a very familiar area where “Matrix” and other movies about the mind-bending world belong. The movie stays inside its settings and rules, and sticks to them even at the finale.

Now it probably sounds uninteresting and mundane to you, but don’t underestimate it; “Inception” is definitely one of the most intriguing movies of the year and deserves all the buzz it has gotten. The director Christopher Nolan provides us an intelligent blockbuster we desperately need among tiresome blockbuster sequels in this summer season, and the movie fiercely descends into the labyrinth of dreams, the risky world where the strict rules can be as formidable as the intractable subconsciousness of a human mind.

With the enormous hit of “Dark Knight”(2008) and a firm support from the major Hollywood studio(the production cost is at least 160 millions dollars), Nolan chose to make the next movie from the screenplay he began to work on around the time when he directed “Memento”(2000), his major breakthrough work. It surely is tempting for any talented director to bloat up his idea in early years when it gets the chance for made into a movie, but Nolan made a relatively small movie while keeping his ground. The result is a tremendously fascinating contradiction. It still retains the scale Nolan might have conceived at first, but you’ll see a huge structure built inside when you plunge into it.

The movie is both simple and complex. It proceeds the narrative straightforward in its own way and we eventually see how dense the whole story becomes. While delving deeper and deeper into the multi-layered world it builds upon the screen, we see the dream upon the stacks of the dreams like the hero upon the stacks of the heroes in “Memento”. It sounds quite difficult, but it’s easy to appreciate how elaborate the movie is thanks to Nolan’s masterful direction and storytelling. We never lose the sense of the direction even when things get very messy and urgent for the characters.

In the world of “Inception”, the advanced technology makes it possible to get inside the dream of other people. With a special device looks like a metal briefcase, more than one people can go inside the subconsciousness of the subject through designed dreams. They can steal, or “extract”, the informations or the ideas from the subject they want(Freddy Krueger must have lots of annoyance due to the intruders beside him in this world). It sounds pretty simple, but the human subconsciousness is a tricky area, and it is not a easy job at all even for the professionals like Cobb(Leonard DiCaprio) and his partner Arthur(Joseph Gordon-Levitt as smooth as his suit).

Because of his expertise in this field and associated illegal activities, Cobb has been a fugitive hiding from the authorities and the companies not so pleased about his doings. He has been separated from his family for a long time and he miss them. One day, a powerful figure named Saito(Ken Watanabe) approaches to him with the offer he cannot refuse. Rather than extraction, Saito wants Cobb to do “inception”. Instead of stealing the information from the target, the heir of Saito’s competing corporation(Cillian Murphy), Cobb is going to plant the foreign idea into the target’s mind. And he will get the immunity if he succeeds in doing this nearly impossible job.

The story is that of a model caper movie – this job is of course “One last hit” for Cobb, and he recruits other members one by one for this special job. They carefully devise the plan from the preparations and researches. There is an expert(Tom Hardy) who can disguise as anyone in the dream, there is a chemist(Dileep Rao) who can concocts the special medicine for their project, and then there is an young college girl(Ellen Page) recommended by the Professor(Michael Caine), Cobb’s father-in-law, for designing the complex maze they and the target will share in sleep. 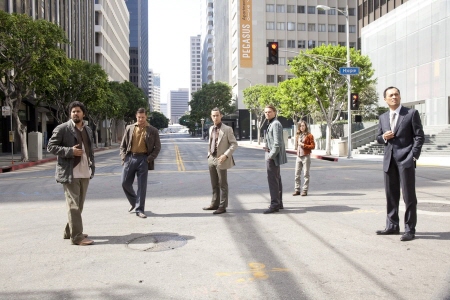 The girl, appropriately named Ariadne, is new to this kind of job, and the rules of the dreamworld are explained to us as well as her by Cobb. Along with her, we learn about things possible and things limited in this world. Anything can happen in the dream, and you can make such a spectacular sight like the city folding into half as shown in the trailers of the movie. However, it is wise for Cobb’s team to draw the attention as little as possible from the subconsciousness, which can be as hostile as our biological immune system to the invaders. Plus, it is also possible that the target has learned how to guard his mind.

After the test-run with these settings, the movie dives into its world at full-force. Rather than dreamworld of elusive logics like Buñuel or Lynch, the movie is the dreamworld of cold, intellectualized logics (it even features a well-known design from one of M.C. Escher’s famous paintings) and it is probably the main reason why many critics are disappointed with the movie in varying degrees. Nevertheless, what Nolan creates on the screen is equally compelling one in its looks and structure. From the starting ground, he drills with the logics of his story far below to the bottom and he creates the massive network of dreams inside his small world as a result. It’s mind-boggling sometimes and we’re not sure about whether what Cobb sees is real or not at some points, but we clearly know the rules and the mechanism of a big picture.

There is an adamantine mechanism between the layers of dreams. It seems predictable, but it corners Cobb’s team into difficult situations when the variables they ignored or could not predict work into its multiple equations. Nolan consistently increases the level of suspense while making dazzling moments like the sequence with the zero gravity, and he also finds the way of simultaneously proceeding the story and the action in his maze. With frantic but tight editing by Lee Smith and the cinematography with distinctive tones by Wally Pfister, we’re fully absorbed into the characters’ situations. Amid several shootings and chases in the movie, the stake goes higher for the characters we come to care about, and more tension gets compressed harder into such a small story. Watching the plot thickened in the movie is a lot like the house of the cards precariously being built with lots of trembling and shuffling.

The characters are, above all, the ciphers in the story. You can substitute their names with their occupations, but Nolan has a bunch of reliable, talented performers who can fill some humanity in their roles. While not so different from his performance in Scorsese’ “Shutter Island”, Dicaprio gives another solid performance as a man haunted by his painful memory of his wife. She is played by Marion Cotillard, and she and Dicaprio provide a small heart at the axis of the metallic story. Regardless of how you feel about the story, you’ll know there is the emotional truth in the base. Nolan casts recognizable actors like Pete Postlethwaite even in small roles, and great Michael Caine effortlessly steals the show even with the brief appearance.

At present, “Inception” is being hailed as Nolan’s another masterpiece by some, and has got some negative reviews from the others. I’m a little skeptical about the former’s claim while understanding the latter’s points, but I could not help but lose myself into the movie by its power. I have to admit that the movie does not go into the other possibilities inherent in the premises(e.g. the supposed conflict between the companies), but the movie sets out to focus intensely on the area it wants to deal with. And it feels relatively short despite its running time(148min) – that fact is interestingly resonant with the story itself.

With breathtaking images and the compelling narrative, “Inception” provides us a memorably awesome world. Among the references of classics like “Solaris” or “Citizen Kane”, Nolan makes us to contemplate on the movie as the dream while depicting how broad and deep world the human mind can be. His dream world is a little too much self-contained and neat, but I admire how he pulls considerable excitement from it while stimulating our thoughts. When I watched the movie on this Wednesday, I saw many of audiences talking about it after the end credit rolls. How often do we come across such a scene like that during the summer season nowadays? 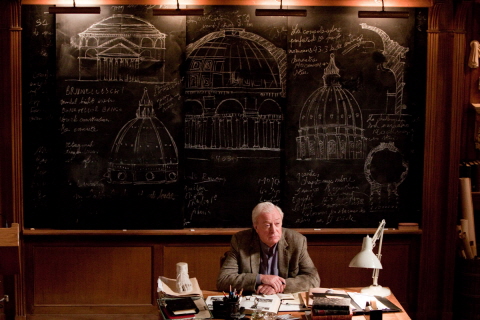 This entry was posted in Movies and tagged Dream, Heist, SF, Thriller. Bookmark the permalink.