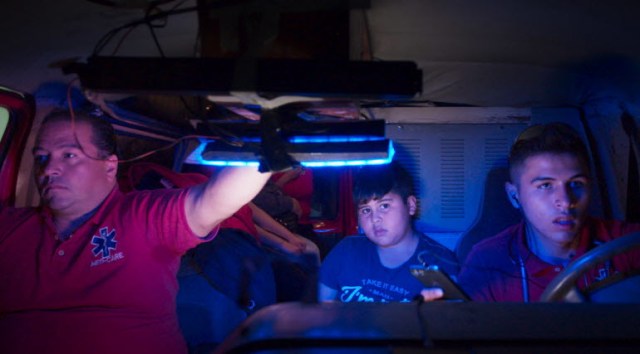 Documentary film “Midnight Family” simply observes its main human subjects and their nighttime activities, but what is vividly captured via its seemingly plain storytelling approach is utterly unforgettable to say the least. As phlegmatically but strikingly presenting how these people in the documentary struggle to work every night on the streets of Mexico City, the documentary lets us emphasize more with their daily hardships, and we accordingly come to reflect more on the deeply flawed system they always have to deal with in more than one aspect.

At the beginning, the documentary briefly informs us on a certain problematic aspect of the public healthcare system in Mexico City. In the city with the population of around 9 million, there are fewer than 45 government ambulances, and many of emergency medical situations in the city have been usually covered by numerous private ambulances out there in the city.

The Ochoa family has driven one of these private ambulances in the city, and the documentary mainly revolves around how they work night by night as coping with various matters ranging from the lack of necessary equipments in the ambulance to police officers demanding bribe. Although Fer Ochoa is the head of their family business on the surface, his 17-year-old son Juan is the de facto leader under many circumstances, and we see how passionate Juan is about his job. For instance, he often eagerly talks to his girlfriend about his latest emergencies, and it seems that he is really proud of doing the job he is born to do in his opinion.

However, things are usually not that good for Juan and his father. Whenever their radio informs them of the latest emergency near them, Juan drives their ambulance to the spot as quickly as possible, but there are always several obstacles for them to deal with. They usually have to compete with other private ambulances, and then they also have to deal with police officers before they are eventually allowed to take injured people to hospital.

Even as Juan and Per are taking injured people to hospital, there are still some matters to be taken care of. While doing as much as they can for an injured person, they must check whether that person in question has medical insurance or not, and that matter certainly affects where they should take that person. At one point, they cannot go to some big hospital just because its parking space for ambulances happens to be full, so they have no choice but to recommend their injured person a small private hospital instead, and their injured person agrees because, well, there is no other choice under this urgent circumstance.

And then there is the matter of getting paid as enough as possible. Juan and his father try hard for getting paid, but many of injured people they help are poor people just like them, and there is always some struggle even when they can get paid for their service. It is usually Juan who has to take care of this difficult matter, and one brief moment indirectly shows his rather tense backdoor negotiation for getting paid more.

While they sometimes get paid fairly well with some satisfaction from getting the job done well, the situation continues to be difficult for Juan and his father nonetheless. They have more troubles with those pesky police officers who demand more money, and Juan sometimes becomes frustrated with how his father is not so careful with those necessary documents for their business as well as a number of required equipments in their ambulance. In addition, their ambulance later needs to be repaired, and that certainly reminds us of how much their business depends on it every night.

The documentary also shows us a bit of how Fer and Juan spend daytime in their small and shabby residence, where they live with Juan’s two siblings. In case of Juan’s younger brother Josué, this plucky kid is understandably not so happy with often being short of money, but it is apparent that he enjoys hanging around with his father and older brother at night, and we frequently see him in the ambulance throughout the documentary. When his father and older brother come to decide that they should cut their food budget and then go outside for buying some cheap groceries, Josué gladly participates in this shopping process, and there is a little warm moment when he and his family subsequently enjoy eating what they have just bought.

Although the documentary does not make any direct point at all, director Luke Lorentzen, who also shot and edited his documentary in addition to co-producing it with Daniela Alatorre, Elena Fortes, and Kellen Quinn, wisely chooses to have those vivid moments in his documentary speak for themselves. As often unnerved by how problematic the healthcare system in Mexico City is, I was also touched by Juan and Fer’s professional dedication, and, as musing more on many difficult times of theirs, I became more grateful to the healthcare system of South Korea, which considerably helped me during a regrettable car accident caused by my idiotic mistake around two years ago.

In conclusion, “Midnight Family” gave me an experience both interesting and absorbing, and this little but undeniably impressive work is surely one of the notable documentaries from last year. Although it may be a bit too dry for you at first, it will soon engage you once you give it a chance, and you will not forget its main human subjects after it is over.

This entry was posted in Movies and tagged Ambulance, Documentary, Real-life figure. Bookmark the permalink.