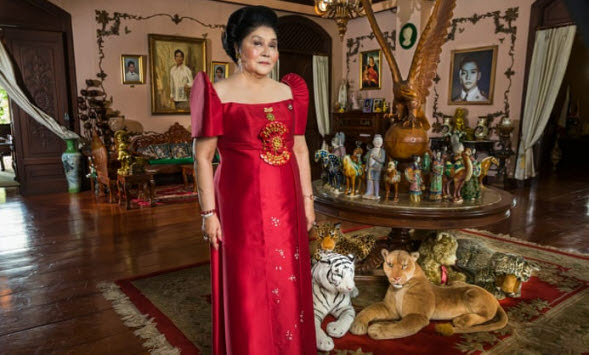 If you are familiar with the notoriety of Imelda Marcos and her rotten family members in the Philippines, you will be often disgusted and horrified as watching documentary film “The Kingmaker”, which presents a very disturbing picture of how she and her family have tried to regain their wealth and political power during last three decades and, unfortunately, have succeeded pretty well. While alternating between her and a number of different figures functioning as the counterpoint to many of her blatant lies, the documentary amuses us with her banal narcissism at first, but then it chills us with her and her family’s evil attempt to erase their dark and horrible past, and you may come to fear for what may happen next to the country which they may soon have under full control again.

At first, the documentary mainly revolves around what Imelda casually says in front of the camera, and we hear a bit about her early years before becoming the wife of Ferdinand Marcos. She emphasizes how poor and difficult her early life was after losing her mother during her childhood period, and then she reminisces about how she came across her future husband and promptly accepted his instant marriage proposal in 1954. Although it seemed that being a politician’s wife was quite a burden to her, she tells us that she managed to get over her fear and anxiety via some psychiatric help, and a number of archival photographs and video clips show us how prominent she was in public as her husband rose to the power in the 1960s.

After becoming the first lady of the Philippines in 1965, Imelda presented herself as the big mother of the country, and she seems to believe that she did many good things to her country as required by her self-styled role. Sure, she was involved in various big government projects including building a certain big bridge, but these projects were strewn with corruption from the start. In addition, she and her husband frequently stole and spent billions of dollars from their government throughout their regime, and, as her close associates frankly tell us, she always got what she wanted – including thousands of expensive shoes for her. 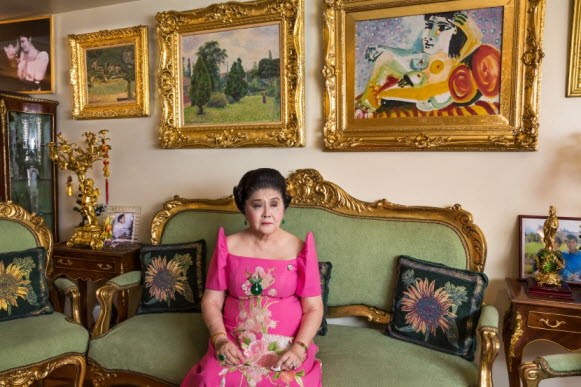 Not so surprisingly, Imelda does not seem to feel any guilt or remorse on these and many other crimes committed by her and her husband. Keeping insisting on how things were good for not only them but also the people of the Philippines, she becomes quite wistful and self-pitying as talking about what she and her husband lost when they had no choice but to leave the country due to the 1986 People Power Revolution, which was ironically ignited by the assassination of her husband’s biggest political opponent and his following attempt for another re-election. Once she and her husband became exiles, nobody wanted to be associated with them, and it looks like that desperate time still feels hurt to her.

However, after her husband eventually died in 1989, things came to change a lot for Imelda and her family members. Although the Filipino government was still investigating on whatever she and her family stole and then hid somewhere, they were allowed to return to the country, and they were actually welcomed by their remaining supporters. In fact, it did not take much time for Imelda but also several other family members including her son Ferdinand “Bongbong” Marcos Jr. to become elected politicians, and that certainly alarmed many people in the Philippines who still remember the terrors and horrors of the Marcos regime.

During the second half of the documentary, several interviewees recollect each own terrible experience during the Marcos regime, and it is really chilling to see how willing the country is to forget the past as wanted by Imelda and her family. At one point, the documentary shows a bunch of young students casually saying how things were better during the Marcos regime, and that clearly shows us that the people of the Philippines were bound to another dictatorship as learning nothing from the past.

And, as many of you know, that did happen in 2016 with President Rodrigo Duterte, who did not hesitate at all to present him as a strongman and did get away with that. Although Ferdinand Marcos Jr. lost in the Vice Presidential election, Imelda and her family supported Duterte in more than one way, and Duterte certainly did not forget what they did for him. Besides frequently insulting and attacking the elected candidate in public, he has abused his political power for Ferdinand Marcos Jr., and he even allowed the body of Imelda’s husband officially buried in a national cemetery despite lots of protests.

Mostly letting her interviewees talk in front of the camera, director Lauren Greenfield, who previously made “The Queen of Versailles” (2012), never overlooks her main human subject’s rotten superficiality, and Imelda eventually comes to us a revolting but fascinating case of the mix of deceit and self-delusion. In my inconsequential opinion, she will continue to look away from her and her family’s evil and corruption, and, unless the people of the Philippines become really sick of her family again someday, she will certainly remain virulent as before during the rest of her life.

In conclusion, “The Kingmaker” sometimes made me wince for good reasons, but it is still a very compelling documentary at least, and I was certainly enlightened more on what has been going wrong in the Philippines these days. Now I come to detest more Imelda Marcos and what she represents, but, boy, she is indeed a piece of work, isn’t she?