Animation film “A Shaun the Sheep Movie: Farmageddon” is as funny and charming as you can expect from Aardman Animations. Although it is relatively less impressive compared to its predecessor “Shaun the Sheep Movie” (2015) due to its rather predictable narrative, the film is still packed with enough humor and personality to hold our attention during its 87-minute running time, and you will often chuckle as amused a lot by small and big comic moments popping out from here and there.

If you have seen Nick Park’s Oscar-winning animation short film “A Close Shave” (1995), you surely remember that little plucky sheep named Shaun, who eventually became the hero of TV animation series “Shaun the Sheep”. Thanks to the popularity of that TV animation series, “Shaun the Sheep Movie” was subsequently made, and it was certainly one of the more entertaining animation films of 2015 while also deservedly garnering an Oscar nomination (It understandably lost to “Inside Out” (2015), by the way). 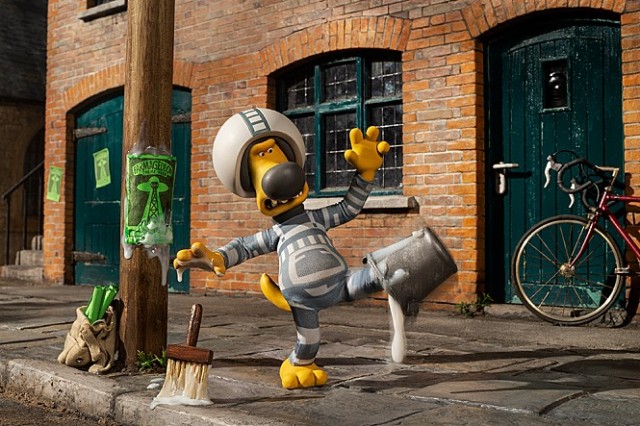 On the next day, Shaun comes to encounter a little mysterious entity. As already shown to us during the opening scene, this entity in question, called “Lu-La”, comes from a spaceship which happened to land on a spot not so far from the farm, and, mainly thinks to her innocent curiosity, it does not take much time for Lu-La and Shaun to befriend each other after their rather awkward first encounter. When Shaun later introduces Lu-La to his fellow sheep, they are certainly frightened at first just like Shaun was, but then they soon come to like Lu-La, and Lu-La certainly enjoys playing along with them.

When Shaun and Lu-La inadvertently cause a big mess in the farm, the Farmer is furious at first, but then he happens to get a silly but plausible idea which may be quite profitable for him. Because the town is getting more attention for those news reports on the spaceship, the Farmer decides to build a small temporary theme park, and that leads to a series of hilarious moments as Bitzer and the sheep in the farm come to do some work for constructing the theme park bit by bit.

In the meantime, a certain government agency is searching for Lu-La and her spaceship. Led by a sour lady who later turns out to have a personal motive behind her frigid appearance, a bunch of agents and a robot, which somehow reminds me of the robot hero of “Wall-E” (2008), come to the town, but they fail to find anything interesting at all, and their boss is not so amused by that, while still quite determined to find a definite proof of the existence of those aliens living somewhere in the outer space.

Although it loses some of its comic momentum during its middle part, the film steadily serves us nice moments of physical comedy in addition to a number of funny references to familiar films ranging from “Jaws” (1975) and “Alien” (1979) to “Close Encounters of the Third Kind” (1977) and, yes, “E.T. the Extra-Terrestrial” (1982). While mostly depending on gestures and facial expressions in the absence of dialogues, it fluidly moves from one comic moment to another, and I particularly enjoyed a sequence unfolded at a local supermarket, where Lu-La happens to experience something equivalent to sugar rush despite Shaun’s frantic attempt to get things under control.

Of course, everything in the story converges together as expected during the last act, but the film still keeps engaging us as before under the competent direction of directors Wil Becher and Richard Phelan, and we also get a fun action sequence while Shaun and his fellow sheep try to help Lu-La return to her home planet (Is that a spoiler?). Although I was a bit disappointed that the film delivers the finale a bit too easily, I got plenty of laughs before that, and I chuckled again during its last two moments.

In conclusion, “A Shaun the Sheep Movie: Farmageddon” does not have that sublime simplicity of its predecessor, but it is at least one or two steps above “Early Man” (2018), which is fairly entertaining but has been regarded as the least successful work from Aardman Animations. It is a shame that the film went straight to Netflix in US while being released in theaters in case of UK and several other countries including South Korea, but it is worthwhile to watch for not only those admirable technical aspects shown from its meticulous clay animation but also its warm-hearted wit and spirit. In my inconsequential opinion, this lovable animation film is much more distinctive than those forgettable digital animation films out there, and I assure you that you will not be disappointed especially if you are looking for something different. 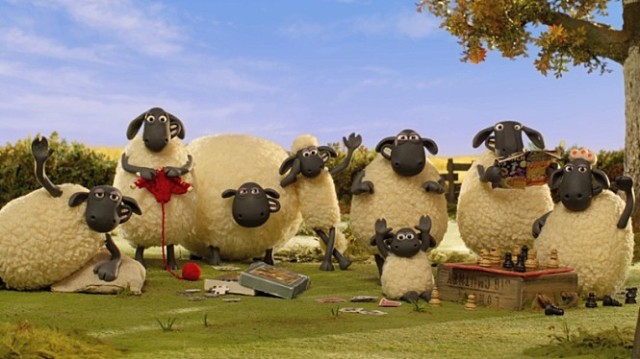