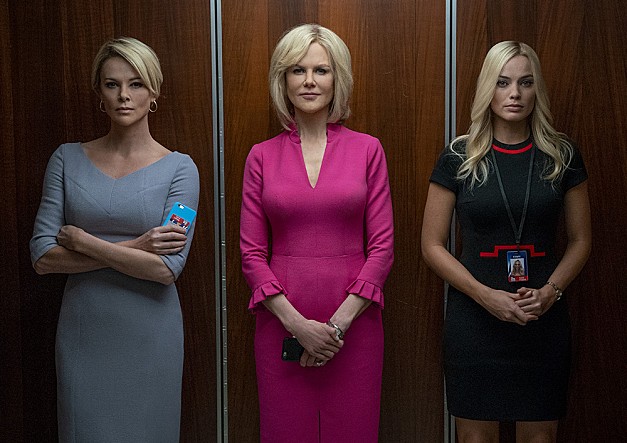 When I heard the news on the sexual harassment scandal at Fox News in 2016, I was not that shocked although quite disgusted at the same time just like many of you. After all, the toxic longtime influence of Fox News on the American society was one of the major factors contributing to that shockingly unbelievable political rise of Donald J. Trump, and, not so surprisingly, Roger Ailes, who was the head of Fox News at that time and also turned out to be a sexual predator who had harassed and exploited many of his female employees throughout his abhorrent career, was one of that vile misogynistic prick’s prominent supporters right from the beginning.

Mainly revolving around three different female main characters, Jay Roach’s new film “Bombshell” attempts to give us glimpses into not only that toxic work environment created by Ailes at Fox News but also how much many of female Fox News employees suffered in their unfair and exploitative system, but, to my disappointment, it merely scratches the surface without going that far beyond what we know about its subject now. As trying to present numerous elements together during its rather short running time which is less than 2 hours, the movie feels often uneven and unfocused without enough dramatic momentum to support it, and that is a shame considering the consummate efforts from its three main cast members.

At the beginning, the movie shows us how Megyn Kelly (Charlize Theron), who was one of the most prominent public figures at Fox News, gets herself into a trouble which turns out to be more serious and troubling than she thought at first. During one of 2016 Republican Presidential debates, she throws several hard questions to Trump for his misogynistic comments and behaviors in public, and then Trump subsequently retaliates via a series of insulting Twitter comments, which instantly lead to more mocking and criticism toward Kelly in public.

Understandably quite annoyed and concerned about what is going on around her, Kelly tells Ailes, played by John Lithgow here in the film, that he and Fox News should stand by her, but, not so surprisingly, Ailes is not particularly willing to do anything besides providing extra security to her, because he cares more about millions of conservative American viewers out there who increasingly support Trump day by day. Kelly certainly feels frustrated about this, but there is nothing she can do except enduring more mocking and criticism to come, and she even finds herself bending her principles during her following exclusive interview with Trump.

Meanwhile, we get to know Kayla Pospisil (Margot Robbie), a fictional character who is the composite of several real-life female figures who worked at Fox News. As your average young American conservative, she is naïvely idealistic during her first days at the headquarters of Fox News, but she soon comes to realize how harsh and competitive her work environment really is. When she gets a chance to work for Bill O’Reilly (Kevin Dorff, who did a spot-on impersonation of that scumbag), she cannot possibly be more thrilled, but then she finds herself verbally harassed by O’Reilly, and the only consolation comes from a few sympathetic female employees including Jess Carr (Kate McKinnon).

Not long after that, Pospisil has a very humiliating moment when she happens to be alone with Ailes in his private office. While never overlooking her pain and trauma, the movie handles this disturbing scene with thoughtful restraint, and the result is effective enough to make us understand and emphasize with her growing conflict in the aftermath. Besides being quite ashamed, she also feels frustrated and suffocated as there is not anyone to whom she can fully confide about what happened between her and Ailes, and there is a small painful moment between her and Carr, who understands her friend/colleague’s pain but is reluctant to talk with her on that. 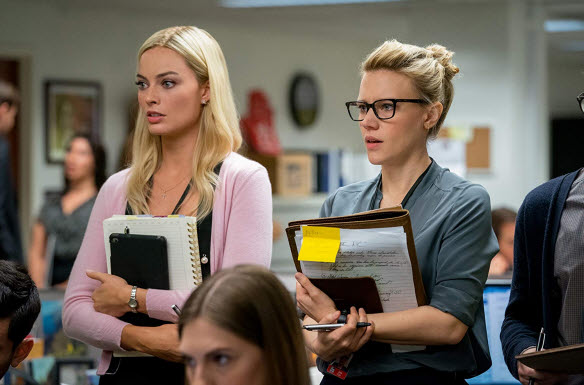 And then things begin to fall apart for Ailes. Gretchen Carlson (Nicole Kidman), who was the co-anchor of the popular program “Fox and Friends” but then gets demoted to a less popular program, tries to bring some change to the system full of sexism under Ailes, but Ailes eventually fires her, and then she comes to sue him for sexual harassment while fully prepared for what she will have to endure for that. She hopes that some of her female colleague at Fox News will come forward to reveal what she and other women at Fox News had to endure under Ailes, but, as Kelly bitterly points out at one point, everyone is scared as constantly monitored and bullied by Ailes, who is quite determined to do anything for protecting himself and Fox News.

Although the movie does a fairly good job of conveying to us the tense and oppressive circumstance with which its three main characters have to deal with, the screenplay by Charles Randolph is shallow and scattershot as trying to juggle a little too many things together and then hurriedly moving onto the eventual finale, and this weak aspect often undermines the good performances from its main cast members. While Charlize Theron deserves to be praised for her impeccably committed performance, Margot Robbie and Nicole Kidman are also effective as two other crucial parts of the story, and John Lithgow is thoroughly deplorable in his supporting role. In case of other notable performers in the film including Kate McKinnon, Mark Duplass, Connie Britton, Allison Janney, Brian d’Arcy James, Richard Kind, and Malcolm McDowell, they do not have much to do except filling their respective spots, but McKinnon, who has been always fun to watch since her breakthrough comic turn in “Ghostbusters” (2016), manages to bring some life and personality to her supporting character.

Like Roach’s previous film “Trumbo” (2015), “Bombshell” is a mild Oscar season movie which does not impress me a lot, but it is partially engaging to some degree thanks to the solid acting from Theron, Kidman, and Robbie. It goes without saying that these three talented actresses are ready for something edgy and revealing from the start, but the movie does not try that hard, and they surely deserve a better film in my inconsequential opinion. 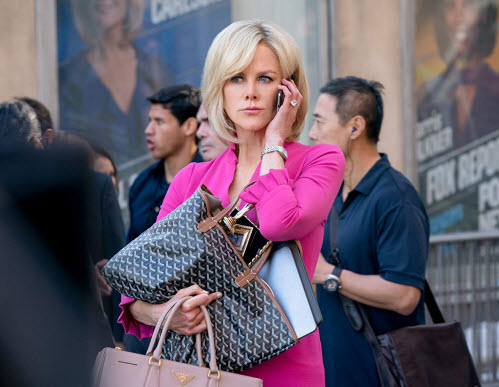