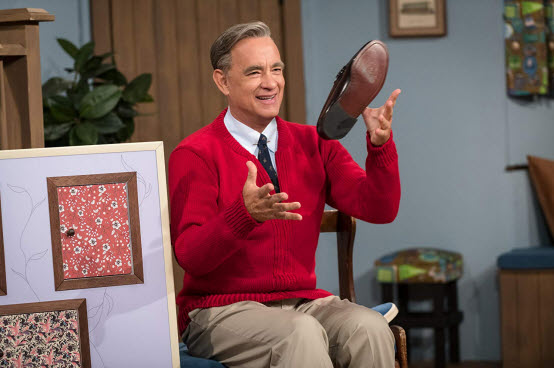 What a gentle and disarming person Fred Rogers was. Although I am not that familiar with his popular children’s television program “Mister Rogers’ Neighborhood”, I could not help but touched and moved by his genuine good will and decency as watching an acclaimed documentary film “Won’t You Be My Neighbor?” (2018), and I came to reflect a lot on his lessons on kindness and compassion, which are still relevant considering how our world has been disrupted a lot by the rising wave of apathy and cruelty these days.

It is a little disappointing that Marielle Heller’s new film “A Beautiful Day in the Neighborhood” is not entirely about Rogers, but it is still a fairly likable film about how Rogers enlightened and affected many people out there besides its fictional hero. I could clearly see through how it was going to pull my heartstrings from the very start, but then it did a pretty nice job of amusing and touching me thanks to its witty and sensitive storytelling, and, above all, it stays true to what Rogers tried to spread around his audiences during more than 30 years.

Set in 1998, the movie mainly revolves around Lloyd Vogel (Matthew Rhys), your average jaded New York City journalist who is not so pleased when his Esquire editor Ellen (Christine Lahti) tells him that he is assigned to profile Rogers. As a guy accustomed to profile more, uh, serious public figures, he thinks Rogers is rather too frivolous for him, but his editor insists that he should do this job no matter what he thinks, and his wife Andrea (Susan Kelechi Watson), who recently gave birth to their little son, is thrilled to hear that her husband is going to meet one of her favorite public figures in person.

Vogel soon goes to Pittsburgh, Pennsylvania, where Rogers has made “Mister Rogers’ Neighborhood” for 30 years since he developed it in 1968. When he arrives at Rogers’ studio, Rogers, who is played by Tom Hanks with gentle warmness, is shooting the latest episode of the show, but he immediately welcomes Vogel without any pretension, and that certainly catches Vogel off guard. 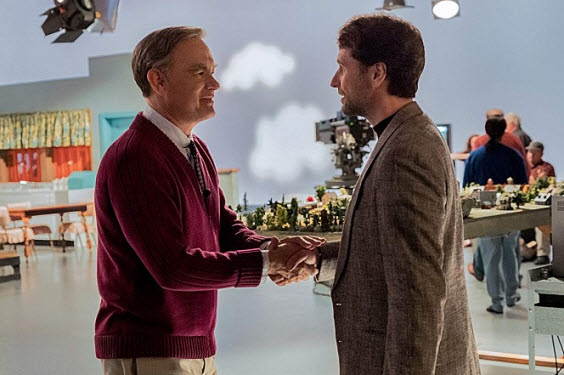 As interviewing Rogers during their little impromptu private time, Vogel comes to discern that Rogers is a genuinely nice person as reflected by his calm voice and benign attitude, and then he comes to open himself in front of Rogers, who instinctively recognizes old pain and resentment inside Vogel. During Vogel’s childhood years, his father Jerry (Chris Cooper) left his mother even though she was dying, and Vogel is still angry about his father although Jerry has recently attempted reconciliation with his children.

After his first meeting with Rogers, Vogel sees that he needs to spend more time with Rogers for his job, and Rogers is willing to be interviewed more by Vogel as he later happens to come to New York City. When he and Vogel are going to Rogers’ staying place by subway, Rogers is instantly recognized by everyone around him, and then we get a sweet moment as everyone around him sings together that amiable theme song of “Mister Rogers’ Neighborhood”

As talking more with Rogers, Vogel comes to reveal himself more in front of Rogers, and he cannot help but become uncomfortable even though Rogers calmly and gently handles the conversation with his two favorite puppets. This scene could be quite silly and hokey in the wrong hands, but, mainly thanks to Heller’s thoughtful direction, it never feels false at all, and her two main performers are convincing in their subtle interactions on the screen.

The screenplay by Micah Fitzerman-Blue and Noah Harpster, which is based on Tom Junod’s 1998 Esquire article “Can You Say… Hero?”, subsequently goes into a more serious mood, but the movie also shows some sense of humor, as reflected by how it cheerfully uses Rogers’ show as a framing device for the main story. As a matter of fact, the movie even tries a bit of surrealism at one point, and it somehow works as a crucial part of Vogel’s emotional journey along the story.

As our surrogate hero, Matthew Rhys, who has been mainly known for his Emmy-winning turn in acclaimed TV drama series “The Americans”, is suitably cast, and he is surrounded by a number of good supporting performers. As Vogel’s problematic father, Chris Cooper, who has been always dependable since he drew my attention for the first time with his notable supporting role in “American Beauty” (1999), gives a solid supporting performance, and so do Christine Lahti, Susan Kelechi Watson, and Maryann Plunkett, who has her own small moment as Rogers’ wife.

And Hanks’s charming performance, which will probably be Oscar-nominated a few weeks later, steadily holds the ground for everyone around him. Thoroughly embodying Rogers’ admirable human qualities, he reminds us again of how effortlessly he can exude good will and decency, and the result is certainly another terrific performance to be added to his exceptional acting career.

Although it is relatively milder compared to Heller’s two previous works “The Diary of a Teenager Girl” (2015) and “Can You Ever Forgive Me?” (2018), “A Beautiful Day in the Neighborhood” is still an enjoyable work packed with enough charm and amiability to engage us, and it will surely make a nice double feature show along with “Won’t You Be My Neighbor?”. I still wonder whether it would be more interesting if it focused more on Rogers’ life and career, but it did its job as well as intended, and I am fine with that.

This entry was posted in Movies and tagged Father and son, Journalist, Real-life figure, TV show. Bookmark the permalink.