Ken Loach’s latest film “Sorry We Missed You” is a bleak slice of hard working-class life you will not forget easily. Phlegmatically and unflinchingly observing how its main characters are driven into more despair and frustration along the story, the movie conveys to us its urgent social messages without any cheap sentimentality, and you may come to reflect on how individuals can be heartlessly exploited and crushed by our capitalistic system, which ultimately cares about more efficiency and profit as coldly disregarding those people toiling at the bottom.

When we are introduced to Ricky Turner (Kris Hitchen) during the opening scene, this plain working-class family guy is about to be hired to run a franchise as a delivery van driver, and we come to gather how things have been bad for him and his dear family. While they have been living in a rented flat for several years due to the 2008 financial crash, Ricky and his wife Abbie (Debbie Honeywood), who has worked as a home care nurse, have barely been able to make ends meet, and he really hopes that his latest job will bring some financial stability to his family.

However, Ricky’s new job turns out to require a lot more than expected. For getting a van of his own, he must pay a considerable amount of money, and that means he has to sell his wife’s car, and Abbie is not pleased about that. Without that car, it is will be more difficult for her to go from one client to another during her worktime, but she eventually agrees to her husband’s decision because they really need money for supporting them and their two children right now.

And Ricky soon comes to see how demanding and exhausting his new job is. Although he is technically a self-employed person, he and many other guys are constantly pushed toward more deliveries by their supervisor, and, above all, they must deliver those packages and boxes in time as demanded. As a matter of fact, they cannot even have enough time for urination as busily driving their vans to here and there around in the city, and one of a few amusing moments in the film comes from when one of Ricky’s colleagues shows him how to handle that bathroom problem.

Meanwhile, we also observe Abbie struggling to work everyday. It is apparent that she is someone born to be a caregiver considering her tender dedication to those people to be handled by her, but she cannot help but become stressed and frustrated at times mainly due to her burdensome work schedule, which has been exacerbated by losing her car. Sure, she wants to rest more and spend more time with her family, but she usually finds herself working overtime, and, as reflected by a brief moment, both she and her husband are quite exhausted whenever they come back to their home at late night.

It seems they still can get things under their control to some degree, but, not so surprisingly, their situation gets worse due to a series of unfortunate incidents during the second half of the movie. Their adolescent son Seb (Rhys Stone), who is your typical rebellious teenager boy, comes to clash more with them as he causes one trouble after another, and both Abbie and Ricky do not know what to do as not having enough time for taking care of their son’s troubled status. Abbie is busy with her clients as usual, and Ricky cannot afford to stop working because he can be slapped with a heavy fine as well as negative points in his work record. 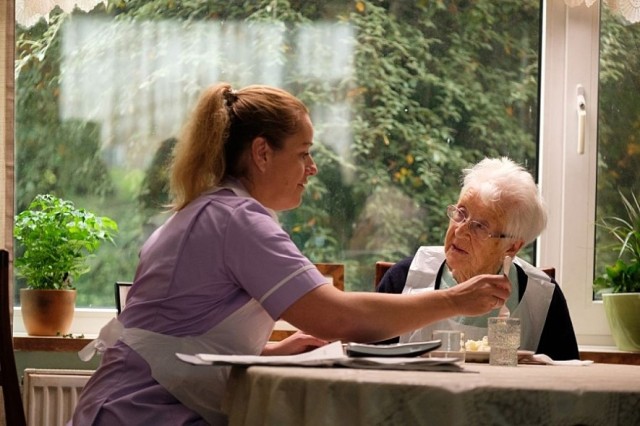 As the screenplay by Paul Laverty, who previously collaborated with Loach in “The Angels’ Share” (2012) and “I, Daniel Blake” (2016), slowly accumulates the anxiety and frustration surrounding Ricky and his family, Loach and his cinematographer Robbie Ryan, who was recently Oscar-nominated for “The Favourite” (2018), steadily maintain its realistic tone on the screen, and a few sudden dramatic moments later in the story, which are usually accompanied by George Fenton’s sparse understated score on the soundtrack, do not feel artificial or contrived. The finale may be a little too melodramatic for some of you, but then, as my friend/mentor Roger Ebert pointed out in his review on “El Norte” (1983), the lives of many poor people out there in our world are melodrama from birth to death, and Ricky and his family are no exception at all.

Loach draws fine natural performances from his main cast members, who are believable as human characters struggling with their harsh, depressing reality in each own way. Kris Hitchen and Debbie Honeywood ably carry the film together as its soul and heart, and Honeywood is particularly fantastic when her character finally decides that enough is enough around the end of the film. As Ricky and Abbie’s two different children, Rhys Stone and Katie Proctor give fine performances as holding each own place around Hitchen and Honeywood, and Ross Brewster is suitably obnoxious as Ricky’s callous supervisor.

Relatively bleaker than “The Angels’ Share” and “I, Daniel Blake”, “Sorry We Missed You” is certainly a tough stuff, but it is another admirable work from Loach, who has been consistent and diligent during more than 50 years since he made his first feature film “Poor Cow” (1967). Although he is 83 years old at present, the movie surely shows us that he is still a master filmmaker who is also a passionate social campaigner, and I sincerely hope he will keep going as usual during next several years.

This entry was posted in Movies and tagged Delivery man, Family, Nurse. Bookmark the permalink.