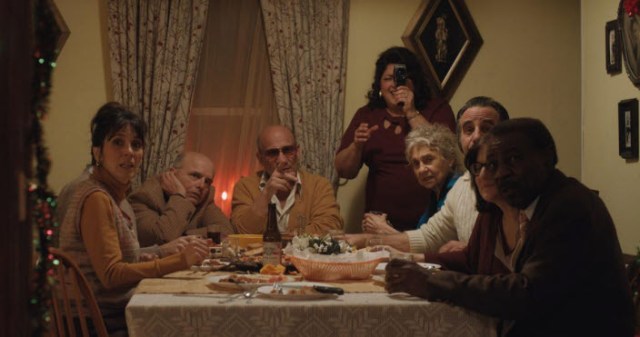 The Christmas day of this year was rather uneventful for me. I was supposed to spend some cozy time with a friend of mine on that day, but, unfortunately, he had to leave due to some personal matter in the middle of afternoon, so I had no choice but to spend Christmas evening and night alone in my residence, and the only consolation was finally getting a chance to watch and review a very long Chinese documentary film.

Anyway, I chose to watch “Feast of the Seven Fishes” during the night of the following day just for getting a bit more of holiday fun, and the movie turned out to be more entertaining and heartwarming than I expected. Sure, within its first 10 minutes, I could instantly see where its story and characters were heading, but then I found myself alternatively amused and touched throughout its running time, and I was also delighted by the nice sights of those tasty seafood dishes shown during its second half.

Set in some rural town of West Virginia, 1983, the movie mainly revolves around a young man named Tony (Skyler Gisondo) and several members of his Italian American Catholic family. It is the day before Christmas Eve, and Tony recently received a letter notifying him that he is allowed to study at some prestigious art school far from his hometown, but he is not particularly excited because, though he really wants to study art, his parents and other family members have expected him to run his parents’ store someday.

When his cousin Angelo (Andrew Schultz) suggests that they should have a drinking night along with Sarah (Jessica Darrow) and her close friend Beth (Madison Iseman), Tony is not particularly interested, but he eventually agrees to accompany Angelo, and then he finds himself attracted to Beth as spending more time with her. As a girl from an affluent Protestant family, Beth is totally different from Tony in many aspects, but she is also attracted to Tony as getting to know him more, and she does not mind that at all because of her growing dissatisfaction with how many things in her life have been rigidly controlled by her overprotective mother. Her mother wants her to get closer to her current boyfriend, but he does not treat her that well, and that surely makes Beth have more doubt on whether she is really fine with where her life is going at present.

It turns out that Tony has a little personal problem with a girl named Katie (Addison Timlin). For an understandable reason, Tony decides to distance himself from her even though he cares a lot about her as an old friend, but Katie still cannot get over from their bitter breakup, and she even lets herself debased just because of her decreasing self-esteem. When Tony happens to learn about that, he tries to help her as much as he can, but Katie is not very pleased to see Tony being with Beth, and that makes her feel more miserable than before.

In the meantime, the movie observes how Tony’s family members prepare for the upcoming traditional Christmas feast consisting of seven seafood dishes just like many other Italian American Catholic families in the town. As Tony explains to Beth at one point, this feast means a lot to his family members and their friends to attend, and there is a fun sequence showing how each seafood dish to be served is prepared one by one. In case of one certain seafood dish, it must be prepared over several days in advance, and we certainly get some amusement as Tony’s family members make a big fuss on that seafood dish later in the story.

Anyway, Tony and Beth get closer to each other than before around the end of the day, and Beth subsequently gets invited to the feast although she does not get much approval from Tony’s stern great-grandmother, who is not amused at all to find Tony and Beth in his private place in the early morning of Christmas Eve. Besides Beth, a few other people including a nerdy but thoughtful boy named Juke (Josh Helman) are also invited to the feast, and there is a naughty running gag on him being embarrassed more than once due to some others’ drunken status. 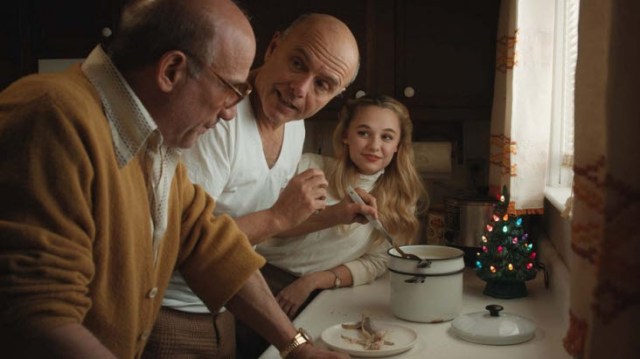 Around the narrative point where the feast is about to begin, the mood becomes more excited and spirited than before, and director/writer Robert Tinnell, who adapted his comic strip for the movie, did a solid job of juggling his many different characters, who respectively come to us as broad but colorful figures to be remembered. While my favorite character in the movie is Juke mainly because of my nerdy sides, several other characters in the film including Tony’s great-grandmother are also pretty endearing to say the least, and you will also come to feel sorry for Katie, whose troubled status feels more poignant along the story.

The movie does not disappoint us as a series of seafood dishes are prepared and then served one by one, and we can clearly sense that the characters in the film really enjoy cooking, eating, and, above all, spending a good time with each other. While Skyler Gisondo and Madison Iseman earnestly hold the center, other young cast members including Addison Timlin, Josh Helman, Jessica Darrow, and Andrew Schultz are also fine in their respective roles, and several notable veteran performers in the film including Joe Pantoliano, Paul Ben-Victor, Ray Abruzzo, and Lynn Cohen are fun to watch as bringing considerable life and personality to their supporting roles.

In conclusion, “Feast of the Seven Fishes” is a pretty familiar seasonal product, but it is imbued with lots of humor and sincerity nonetheless, and I was often entertained by many colorful moments in the film. In short, this is a fun and delicious holiday season flick packed with enough distinction, and I will not mind revisiting it during the next Christmas season.