Netflix movie “The Two Popes”, which is released in selected South Korean movie theaters before being released on Netflix in the next week, did more than merely regarding its two real-life figures. As their characters frequently pull and push each other over serious matters involved with the future of their religious organization, the movie often amuses and touches us as gradually revealing their deep faith and humanity along the story, and it is also supported well by two of the best actors in our time.

When Pope John Paul II died in 2005, billions of people around the world paid attention to who would be the next Pope. Among numerous prominent cardinals gathering in the Vatican City, Cardinal Jorge Mario Bergoglio of Argentina (Jonathan Price) received some considerable support during the following Conclave because of his progressive political stance, but he refused because he wanted to continue to help the poor from his humble position as he had done for many years, and the Conclave was eventually ended with the election of Pope Benedict XVI (Anthony Hopkins), who is ready to stick to his conservative position just like his predecessor.

7 years later, Cardinal Bergoglio receives an unexpected letter from the Vatican City. He has requested the resignation from his current prestigious position for a while for approaching closer to those poor people of his church, but he has not got any reply yet, and now it looks like the Pope is finally willing to meet him in person before deciding on whether he will allow Cardinal Bergoglio to resign. 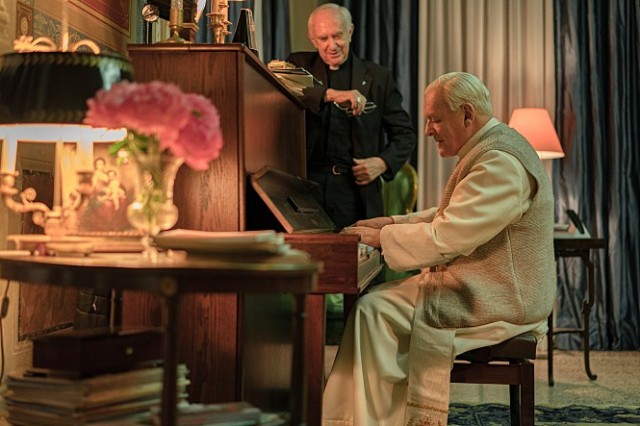 Shortly after arriving at the Pope’s summer residence outside Rome, Cardinal Bergoglio meets the Pope, and both of them are reminded again of how much they are different from each other considering their respective social/political stances. While the Pope strongly believes that their church should maintain their old traditional values in front of the ongoing changes in the outside world, Cardinal Bergoglio firmly argues that the Church should be changed along with the outside world, and they soon come to clash with each other on those sensitive issues on birth control, abortion, homosexuality, and, yes, the sexual abuses committed by many Catholic priests, which have shaken the Catholic Church a lot since its longtime history of crime and cover-up was finally exposed in public in the early 2000s.

The Pope has tried to maintain the status quo and restore the public image of the Catholic Church during last 7 years, but things have only gotten worse for him and the Catholic Church. Another public disclosure of the corruption inside the Catholic Church shocked and disillusioned many Catholics around the world again, and he is certainly not free from blame at all because the figure at the center of this latest scandal is none other than his personal assistant.

On the next morning, the Pope and Cardinal Bergoglio go back to the Vatican City, and then the Pope reveals a very important decision he made before meeting Cardinal Bergoglio. He decided to resign, and he thinks Cardinal Bergoglio is the right person to succeed him, considering that, as he grudgingly admits, their church does need changes for its future.

Certainly caught off guard by this, Cardinal Bergoglio tries to persuade the Pope not to resign, but the Pope is pretty adamant about this decision of his, and their private conversation subsequently leads to how much the Pope feels inadequate as the head of the Catholic Church – and why Cardinal Bergoglio is reluctant to be the next Pope. As shown from occasional flashback scenes, Cardinal Bergoglio went all the way when he suddenly came across a sign which led him to devoting himself to God, but he subsequently found himself in a tricky grey area of faith and morality during those dark years of military dictatorship, and he still feels guilty about what he could not do during that time. 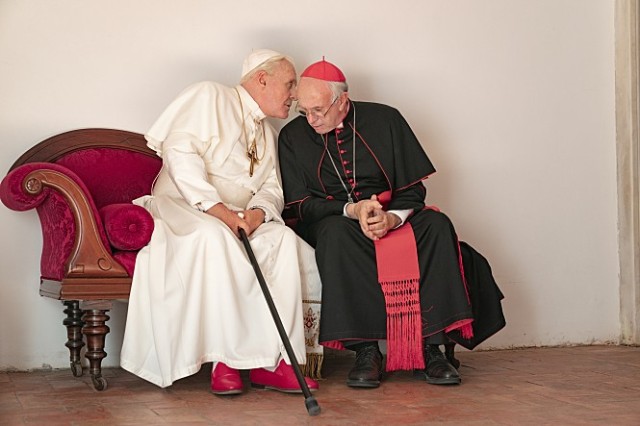 While intensely observing what is being seriously exchanged between the Pope and Cardinal Bergoglio, director Fernando Meirelles, who has been mainly known for “City of God” (2002) and “The Constant Gardner” (2005), and screenplay writer Anthony McCarten, who adapted his book “The Pope”, also provides several humorous moments to lighten up the mood a bit. I was particularly tickled by the unexpected appearance of a certain famous pop song during the Conclave scene, and I also like other small funny moments including a brief shot revealing the Pope’s favorite beverage.

Above all, the movie is carried well by its two main performers, who surely have lots of fun from playing off against each other on the screen. While Jonathan Pryce effortlessly embodies his character’s inner decency and integrity, Anthony Hopkins, who previously collaborated with Meirelles in “360” (2011), brings dignity and vulnerability to his role as also demonstrating that he is still a compelling actor despite appearing in a bunch of forgettable films during last 10 years, and he and Price give us one of the best duo performances of this year.

Overall, “The Two Popes” is not only very entertaining but also quite moving mainly thanks to Price and Hopkins, and I noticed how actively the audiences around me responded to the movie. To be frank with you, I have no idea on how much its story is fictional, but I come to respect Cardinal Bergoglio, who eventually became Pope Francis, more while having some respect toward Pope Benedict XVI. Not many old, powerful dudes could make such a bold choice as humbly accepting that things change, you know.