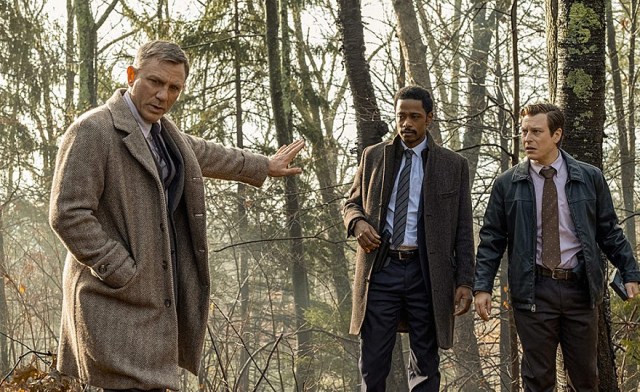 Rian Johnson’s latest film “Knives Out” is a deliciously entertaining whodunnit which will delight any devoted fan of mystery novels like me. While I could see through its wily, dexterous handling of plot elements at time, I was really caught off guard more than once during my viewing, so I sincerely advise you not to read the next paragraphs if you want to enjoy the film as fully as possible.

Right after the opening scene where Harlan Drysdale (Christopher Plummer), an old rich man who has been known well for many popular mystery novels written by him, is found dead in the next morning after his birthday party, the movie promptly moves to a scene where some of Harlan’s family members who happened to be in his big house at that time are questioned by the police one by one. It initially seems that there is not anything suspicious about Harlan’s surviving family members, but, of course, it is gradually revealed to us that each of them has each own plausible motive for wanting Harlan’s death, and they are all naturally regarded as main suspects by Benoit Blanc (Daniel Craig), a well-known private detective who happens to get involved in the case shortly after Harlan’s death.

While Detective Lieutenant Elliot (Lakeith Stanfield), a local cop assigned to the case, thinks the case is pretty simple enough to be closed soon, Blanc thinks otherwise, and then he comes to pay attention to Marta Cabrera (Ana de Armas), a young woman who has worked as Harlan’s nurse and caretaker for several years. Due to a certain physical condition of hers, Marta cannot lie well in front of others, and it does not take much time for Blanc to confirm his suspicion because all he has to do is throwing some important questions to her and then observing how she responds to them.

After a certain plot turn is sprung out, the movie seems to show us every card held behind its back, but it keeps us engaged via a number of small questions still lingering around the case. For example, why did Harlan’s dogs suddenly bark in the middle of that fateful night? Where is a certain personal letter intended for one of Harlan’s children? How much does Harlan’s elderly mother, who is mostly silent and wordless, know about what is going on around her? Above all, who is the person responsible for Blanc’s involvement in the investigation on Harlan’s death?

Now I should be more discreet about describing how Johnson’s smart screenplay operates after carefully establishing its story and characters during its first act. While there is an expected dramatic moment coming from Harlan’s will, there are also more than one moment of blackmail, and Blanc, who looks rather ridiculous but turns out to be pretty smart and resourceful just like Detective Columbo or Hercules Poirot, keeps delving further into the case to the annoyance of more than one characters in the story, while also trying to figure out a solution which can have everything in the case fit together perfectly without any doubt.

Steadily maintaining the level of suspense as required, the movie frequently amuses and entertains us via its sharp wit and impeccable style. We are tickled a lot by a number of darkly humorous moments which show us more of how unlikable many of Harlan’s surviving family members are, and the movie also throws a biting social/political commentary while observing the increasingly tricky circumstance of Marta, who subsequently becomes more worried for understandable personal reasons. In addition, I savored every small and big details of Harlan’s posh house which is full of interesting things including a certain hidden entrance, and I wonder whether a sailor mannequin in the house is a reference to the similar one shown in “Sleuth” (1972), another comic mystery thriller film which is also mainly set in the big antique house of a popular mystery writer. 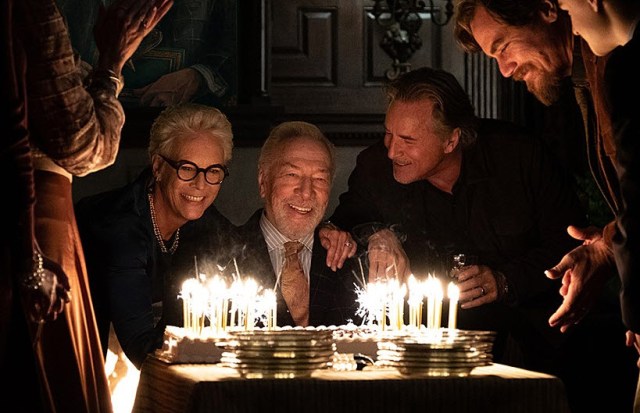 While it is not much of a spoiler to tell you that the story eventually arrives at an obligatory scene where everything becomes quite clearer to us, the movie skillfully delivers this crucial moment with precise coming timing, and Daniel Craig, who already showed considerable comic talent via his hilarious supporting turn in Steve Soderbergh’s “Logan Lucky” (2017), delivers his big moment with admirable gusto and intensity. Cheerfully wielding an exaggerated Southern accent, he did a brilliant job of balancing his character between humor and intelligence, and you may find yourself wanting another mystery movie featuring his character when the movie is over.

In case of the other main performers in the film, each of them has each own moment as having a lot of juicy fun with their broad archetype roles just like Craig. While Chris Evans, Jamie Lee Curtis, Michael Shannon, Don Johnson, Toni Collette, Lakeith Stanfield, Jaeden Martell, and Christopher Plummer are more prominent in comparison, Katherine Langford, Noah Segan, Edi Patterson, Riki Lindhome, K Callan, Frank Oz, and M. Emmet Walsh are also entertaining in their respective supporting parts, and Ana de Armas surely deserves to be praised for what will probably be regarded as a breakthrough for her acting career.

On the whole, “Knives Out” is another compelling genre piece from Johnson, who drew my attention with his debut feature film “Brick” (2005) and then moved onto “Looper” (2012) and “Star Wars: The Last Jedi” (2017). Like any first-rate mystery novel, the movie plays quite well with its genre elements, and I am willing to revisit it for savoring its goodies again.

This entry was posted in Movies and tagged Family, Murder, Mystery, Sleuth, Thriller. Bookmark the permalink.