As far as I can remember, I was a pretty mild child before I officially entered adolescence in 1996. Sure, I was a rather nerdy and quirky boy whose mind was usually occupied with books and movies, but I usually stuck to whatever was demanded to me by my parents and teachers, and those adult matters including sex were more or less than abstract knowledge to be absorbed just like many other things I encountered via books and movies. For example, I learned about condom when I was about 10, and I had no idea on why my parents were upset to hear that word uttered from my mouth.

And that is the main reason why I could not help but amused a lot by “Good Boys”, an R-rated comedy film revolving around three sixth grade kids who do and say lots of darndest things throughout the movie. While I occasionally winced and cringed during my viewing for good reasons, I found myself chuckling for a number of uproarious moments in the film as appreciating its sweet and lightweight aspects, and I was a bit touched as observing how its three young characters come to learn some lessons and grow up at the end of their innocently naughty journey.

The three young heroes of the movie are Max (Jacob Tremblay), Lucas (Keith L. Williams), and Thor (Brady Noon), who have been close to each other as frequently hanging around with each other in their suburban neighborhood. Calling themselves ‘Beanbag Boys’, they are eager to be as cool as those popular kids in their elementary school, and Max is particularly interested in a certain pretty girl in the school, but, like many kids around his age, he hesitates as he does not know anything about how to approach to her.

And then there comes an opportunity to Max one day. He is invited to an evening party to be held at the house of one of the coolest kids in the school, and it seems that he may get a chance to kiss that girl in question, though he has never kissed a girl before. Lucas and Thor, who are also allowed to come to the party, are certainly willing to help their friend, and that leads to an amusing scene where they try Google search and then unintentionally encounter something very inappropriate for their age.

They later use a drone belonging to Max’s father for watching on an older girl who may demonstrate how to kiss, but, not so surprisingly, they soon get into a problematic situation which gets messier as they try to handle it as much as they can, and the movie continues to provide silly but funny scenes to draw more laughs from us. For example, there is a running gag involved with our three young boys’ clumsy attempt to unscrew the child safety cap of a certain medicine bottle, and then, thanks to Thor’s parents who happen to have a rather kinky sexual taste, we see our three young boys innocently handling a number of sexual objects including a sex doll, which incidentally gives us more than one wacky moment.

As maintaining its cheerful mood, the screenplay by director Gene Stupnitsky and his co-writer Lee Eisenberg, who also participated in the production of the film along with Evan Goldberg and Seth Rogen, adds some seriousness to its story and characters. While Max is really serious about what may be his first romance, Thor is afraid of going further with his singing talent behind his cocky attitude, and Lucas often feels confused and depressed as facing his parents’ divorce.

Taking several predictable steps during its third act, the movie accordingly comes to lose some of its narrative momentum, but it does not lose its sense of humor at least while also providing some depth to some of its broad supporting characters. In case of two older girls who happen to antagonize our three boys, they turn out to be less mean than expected, and they even give our three boys some advice on growth and friendship later in the story.

The three main young performers in the film are splendid in their effortless comic performance. Jacob Tremblay, who was simply unforgettable in “Room” (2015), demonstrates again that he is indeed a very talented actor to watch, and, considering of the range of his talent shown from “Room” and this film, it will be interesting to see whatever he will do as an adult performer in the future. While Brady Noon ably conveys his character’s innocence and vulnerability behind all those swaggers of his on the screen, Keith L. Williams is constantly engaging in his relatively low-key acting, and he and Noon are fun to watch whenever they push and pull each other with Tremblay in the middle.

The supporting performers surrounding the three main young performers in the film bring colorful personality to their respective roles. While Molly Gordon and Midori Francis have a few juicy moments as the two aforementioned girls, Will Forte is hilariously serious as a father who cares about his son a little too much, and Lil Rel Howery and Retta, who play Lucas’ divorcing parents, have a priceless comic moment when their characters tactfully explain to Lucas on why they decided to divorce.

Although it is surely a comedy film targeting adult audiences, I am now wondering how kids around the stage of the sixth grade respond to “Good Boys”. Of course, I am not particularly willing to recommend it to them, but, considering that most of them are more knowledgeable than we think these days, I guess they will enjoy it as much as adult audiences. 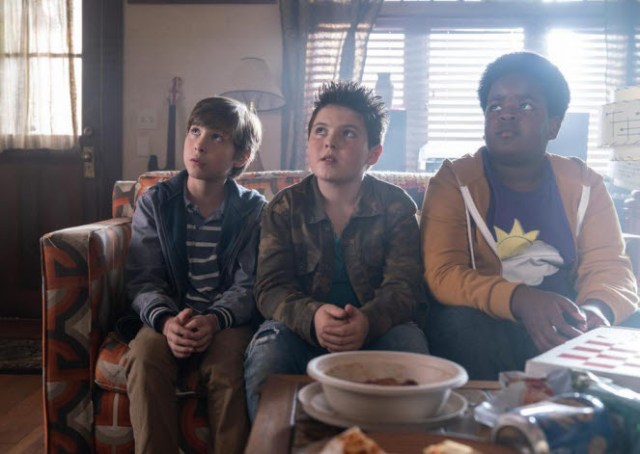 This entry was posted in Movies and tagged Children, Comedy, Friendship. Bookmark the permalink.