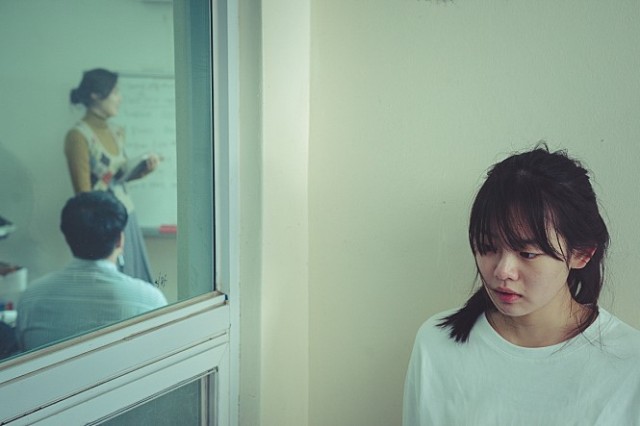 South Korean film “Sub-Zero Wind” is as bleak as its very title suggests. Like many of recent South Korean coming-of-age drama films, the movie is often shrouded in stark and gloomy realism, but its story and characters are thoughtfully handled with enough sensitivity and empathy at least, and we come to care a lot about its young heroine’s increasingly desperate struggle with her harsh world.

During its prologue part, the movie quickly establishes the changed situation surrounding Yeong-ha (Moon Seong-an), a 12-year-old girl living somewhere in Seoul. As her mother Eun-sook (Shin Dong-mi) recently divorces and then begins to live with a guy named Yeong-jin (Park Jong-hwan), Yeong-ha is soon going to be sent to her father’s residence, and she is not so happy about this because that means she is going to be separated from her cousin Mi-jin (Park Seo-jin), who has also been her schoolmate/friend for several years.

However, Yeong-ha’s father has disappeared for some unknown reason, so she has no choice but to live with her mother and Yeong-jin instead. Although he has not married Eun-sook yet for a certain personal reason, Eun-sook have already accepted Yeong-jin as her second husband, and Yeong-ha has no problem with regarding him as her new father while settling in her mother’s current residence.

3 years later, things seem to look a little better than before for Yeong-ha, who is now played by Ahn Jin-hyun, and her family. Having studied and worked a lot for becoming a Christian preacher someday, Eun-sook hopes that she will soon have her own parish which will probably provide more income for her poor family, but Yeong-jin is not particularly enthusiastic about that, and neither is Yeong-ha.

Meanwhile, we get to know a bit more about the hard situation of Mi-jin, who is now played So Yoo-jin. Besides Eun-sook and Mi-jin, there is no one to help Mi-jin and her ailing grandmother, so Eun-sook tries as much as she can for helping Mi-jin and her ailing grandmother, but then she is often reminded of how poor she and her family are. Shortly after the eventual death of Mi-jin’s grandmother, she attempts to persuade Mi-jin’s family members on a certain financial matter which may benefit her a bit, but that only results in a very awkward moment between them.

When Eun-sook subsequently comes to decide to make another new start in Busan, Yeong-ha is not so pleased as she would rather be with Mi-jin instead of her mother and Yeong-jin, but there is nothing she can do about that. Four years after, things still do not look any better for Yeong-ha, who is now played Kwon Han-sol, and her mother, and Yeong-jin begins to drink more often than before as mired with his own frustration and desperation.

And then something happens around the end of Yeong-ha’s last high school year. When she comes back to her home early in the afternoon, Yeong-jin happens to be loitering as usual, and he suggests that they should drink together just for, well, feeling good. The mood becomes a bit lively as they drink some beer, but then Yeong-ha gets tired and then asleep in her room, and then…

I will not go into details here, but I can tell you instead on how much Yeong-ha is emotionally troubled as a consequence. She becomes quite distant to her mother for a while, and then she tearfully confides her incident to her mother, who is certainly shocked and enraged but then only comes to show what a lousy mother she is. Discerning that there are not many options in her circumstance, she even considers ignoring whatever happened to her daughter, and she consequently lets down her daughter more than ever.

At least, Yeong-ha finds some solace from Mi-jin, who is now played by Ok Soo-boon. Although she has been busy with preparing for getting a job after her high school graduation, Mi-jin is willing to be with Yeong-ha in Busan for a while at least, and Yeong-ha is certainly glad to be with Mi-jin as before. After leaving her home, they rent a small room in a private dormitory building for people preparing for examination, and Yeong-ha begins to work at a nearby bar for earning their living while Mi-jin continues to prepare for upcoming job interviews.

However, there is still not much hope for Mi-jin and Yeong-ha, and the movie calmly observes their respective struggles as steadily maintaining its dry and stark realistic tone as before. In addition, director/writer Kim Yu-ri, who previously made several short films before making a feature film debut here in this movie, draws good natural performances from her main cast members. While Shin Dong-mi and Park Jong-hwan are effective as two substantial adult characters in the story, Kwon Han-sol, Ahn Jin-hyun, and Moon Seong-an are flawlessly connected together in their acting, and the same thing can be said about Ok Soo-boon, So Yoo-jin, and Park Seo-jin.

On the whole, “Sub-Zero Wind” is another interesting South Korean film of this year, and it also reminds me again that the future of South Korean cinema indeed lies on those talented South Korean female filmmakers out there. I think Kim Yu-ri is another good female South Korean filmmaker to watch, and I certainly hope that she will make more movies after this solid first step of hers. 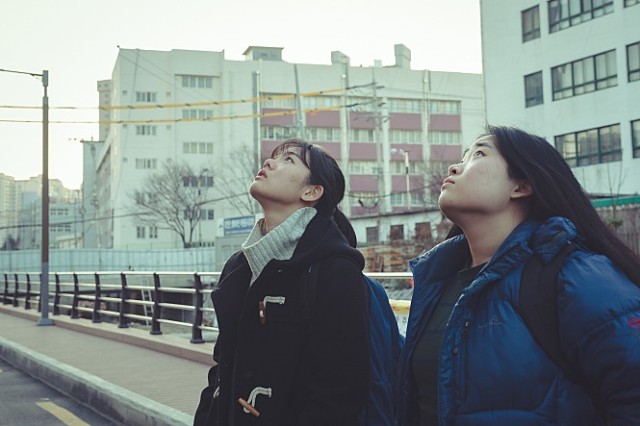