The Coen brothers’ debut film “Blood Simple”, which happened to be released in South Korea in last week, is an exemplary genre exercise to be appreciated and cherished for many good reasons. While it may look modest compared to what these two exceptional filmmakers have achieved during last 35 years, the movie remains fresh and timeless while still capable of gripping and electrifying us, and it certainly deserves to be mentioned along with their several stellar works such as “Fargo” (1996) and “No Country for Old Men” (2007).

The premise of the movie seems familiar to the bone at first. After the opening monologue scene which succinctly establishes its hard-boiled tone, we are introduced to Ray (John Getz) and Abby (Frances McDormand), and we get to know about their current trouble as listening to the hushed private conversation between them. They are quite concerned about whether Abby’s husband Marty (Dan Hedaya), who also happens to be the owner of a Texan bar where Ray works, will learn of their ongoing affair someday, and, though Abby is willing to leave her husband as soon as possible, Marty is not someone they cannot easily mess with.

Not so surprisingly, it soon turns out to us that Marty has already suspected them. As a matter of fact, he hired some sleazy private detective, who subsequently presents him a definite evidence on Ray and Abby’s affair. Once it becomes quite clear to him that Abby is going to leave him anyway, Marty goes to the private detective again, and, this time, he offers ten thousand dollars for killing his wife and her lover. While understandably reluctant at first, the private detective eventually accepts the offer, and we later see him approaching to Ray and Abby during one night, but then…. 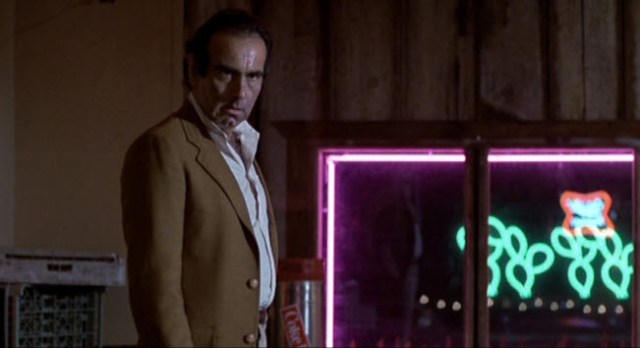 Now I have to be more discreet in describing the plot for not spoiling your entertainment, but I can tell you instead on how deviously the movie dials up and down the level of suspense once everything is set and then begins to roll along its twisted narrative. For example, there is a running visual gag involved with a couple of fishes placed on a certain important object, and there is also an absurdly nightmarish sequence where a certain main character attempts a foolish cover-up due to a rather amusing misunderstanding. As its main characters get mired in more chaos and confusion, the Coen brothers’ screenplay often throws some wry moments to be savored, and you may be tickled a bit by the one involved with the accidental discovery of a certain morbid photograph.

The movie is pretty impressive in technical aspects although its production budget was around 1.5 million dollars. The Coen brothers, who also unofficially edited the film with Don Wiegmann, did an impeccable job of filling the screen with authentic local atmosphere, and the cinematography by Barry Sonnefeld, who would later move onto his own directing career with “The Addams Family” (1991), is often breathtaking for a number of impeccable visual moments including a brief but striking scene where the camera suddenly swoops upon two main characters for dramatic effect.

In the end, thanks to the masterful manipulation of plot and characters by the Coen brothers, everything in the story eventually culminates to a climatic sequence which deserves to be studied and analyzed for its sheer precision. At one point during this sequence, we get a grisly moment as a stupefying act of violence is inflicted on the hand of one of the main characters in the film, and we wince and then become quite amused as observing how that main character takes care of the consequence of that act of violence in a very painful but undeniably logical way.

The four main performers are suitably cast in their broad archetype roles. While John Getz is convincing as an ordinary guy struggling to grasp and handle his increasingly confusing circumstance, Frances McDormand, who would become more prominent thanks to a series of stellar performances including an unforgettable Oscar-winning turn in “Fargo”, is solid in her debut acting, and Dan Hedaya, who would also enjoy a long, productive acting career like McDormand, is unpleasant and pugnacious as required. In case of M. Emmet Walsh, a dependable character actor who has never bored the audiences since his small supporting turn in “Midnight Cowboy” (1969), it is evident that he is enjoying every moment of his in the film, and his private detective character is indubitably one of the most colorful elements in the movie.

While appreciating many excellent aspects of “Blood Simple” again, I could not help but muse on how steadily the Coen brothers has gone up and down as trying many different things during last 35 years. After “Blood Simple”, they went all the way for the wacky comedy of “Raising Arizona” (1987), but then they got quite more serious with “Miller’s Crossing” (1990) and “Barton Fink” (1991), and then they went in a completely opposite direction with “The Hudsucker Proxy” (1994). After “Fargo” and “The Big Lebowski” (1998), there came more idiosyncratic works such as “O Brother, Where Art Thou?” (2000) and “The Man Who Wasn’t There” (2001), and then there came “No Country for Old Men”, which garnered them three Oscars including the one for Best Picture.

Overall, “Blood Simple” entertains me as much as it did when I watched it for the first time more than 10 years ago, and this neo-noir masterwork surely reminds me again of how talented and skillful the Coen brothers were even at the beginning of their illustrious career. As shown from their recent notable works such as “A Serious Man” (2009), “True Grit” (2010), “Inside Llewyn Davis” (2013), and “The Ballad of Buster Scruggs” (2018), they still remain at the top of their game, and I certainly hope that they will keep going as before.

This entry was posted in Movies and tagged Affair, Crime, Film Noir. Bookmark the permalink.