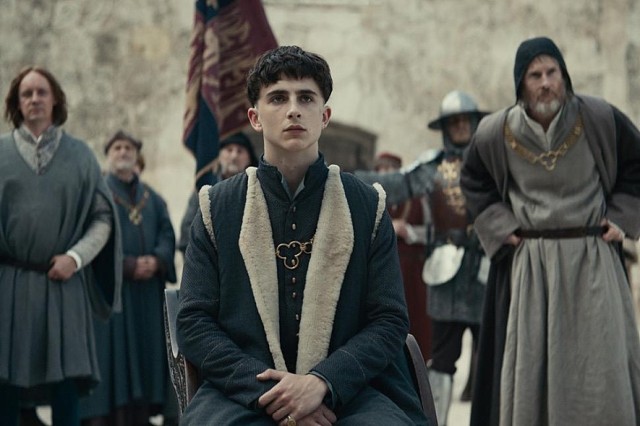 Don’t expect romance or eloquence from David Michôd’s new film “The King”, which is released in South Korea this week before its upcoming online release on November 1st. This is a solemn and brooding reinterpretation of a series of plays by William Shakespeare including “Henry V”, so you may be disappointed with a number of notable changes in the film, but, at least, it is not wholly without interest thanks to the good efforts from its main cast members.

After the opening scene showing the grim and bleak aftermath of a battle, the movie immediately thrusts us into the problematic political situation surrounding King Henry IV of England (Ben Mendelsohn). It is around the early 15th century, and his country has been suffering from civil wars while the military conflict with France is still being continued, but he is not that willing to solve this complicated circumstance as his body keeps getting deteriorated due to serious illness, even when one of his followers throws a blatant comment on how he lets things get worse day by day without doing anything at all.

More aware of his impending death, Henry IV calls for his eldest son Prince Hal (Timothée Chalamet), who has been spending time with lowlife bums in one of the seediest areas of London since he became quite estranged from his father some time ago. Although he is not that willing to meet his father again, he eventually comes to the court as advised by his loyal drinking buddy Falstaff (Joel Edgerton), but he is only told that his younger brother will succeed his father instead of him.

Prince Hal is not so upset by his father’s decision, and he instantly goes back to his usual days of drinking and other debaucheries, but then a series of unexpected incidents push him toward the position he never wanted from the beginning. After his younger brother dies due to another civil war, he finds himself next in line for the crown again, and then he gets a sort of closure between him and his father right before his father’s death, which promptly leads to his ascension to the throne.

Once he officially becomes King Henry V of England, Prince Hal goes all the way for distancing himself from his former self, and he also tries to bring some changes into his exhausted country with the assistance of his advisor William Gascoigne (Sean Harris), but he cannot help but feel self-doubt and uncertainty at times. As his younger sister, who is incidentally the Queen of Denmark, shrewdly points out to him during their little private moment, being a king is a lonely and risky business because there is not anyone to be wholly trusted in court, and the situation between England and France becomes more tense especially after a rather insulting gift is sent to him.

Although the king wants to do as little as possible on this increasingly troublesome political matter, there eventually comes a point where he eventually decides that enough is enough. With the full support from Gascoigne and other lords, he boldly embarks on the battle with France, and he also appoints Falstaff as his commander-in-chief because he knows there is a wise and seasoned war veteran behind Falstaff’s seemingly seedy appearance.

During the following battle sequences, the movie curiously sticks to its restrained tone as before. In case of the first battle sequence, it is more or less than a long, arduous waiting game while lots of fireballs are periodically hurled toward a castle, and how this situation is resolved in the end may be a bit too anti-climactic for you. In case of the supposedly climactic sequence unfolded in Agincourt, the movie closely looks at all those grisly and grimy details of soldiers fighting to death on a muddy field, and that is certainly far different from what we saw from Laurence Olivier’s “Henry V” (1944) or Kenneth Branagh’s 1989 film of the same name.

Although the movie often trudges during its second half, it is mostly held together well together by the strong lead performance from Timothée Chalamet, who feels quite different from his Oscar-nominated turn in “Call Me by Your Name” (2017). While initially looking casual and youthful as required, Chalamet is believable in his character’s subsequent transformation along the plot, and he also handles well a crucial scene where his character has to galvanize the army before their big battle, though it is a bit of shame that he is not allowed to deliver something as rousing as that famous speech in Shakespeare’s aforementioned play.

The other notable main cast members did an adequate job of filling their respective supporting roles. While Joel Edgerton, who wrote the screenplay with Michôd, has a little juicy fun with playing one of the most memorable characters created by Shakespeare, Sean Harris and Ben Mendelsohn are dependable as usual, and, as an arrogant French prince, Robert Pattinson gleefully chews his scenes with a deliberately ridiculous Gallic accent. Although she only briefly appears in two scenes, Thomasin McKenzie, who was unforgettable in Debra Granik’s “Leave No Trace” (2018), leaves considerable impression, and the same thing can be said about Lily-Rose Depp, who holds her small place well during her few moments with Chalamet.

While it is not entirely successful in its reinterpretation attempt on Shakespeare’s plays, “The King” is a fairly competent period drama on the whole, and I enjoyed its mood and performance to some degree although I felt impatient with its rather ponderous narrative pacing from time to time. I am glad to watch it at a movie theater instead of watching it at my home later, but I will not urge you to watch it right now.

This entry was posted in Movies and tagged Real-life figure, Royalty, War. Bookmark the permalink.