South Korean independent film “Maggie”, which actually means ‘catfish’ in Korean, a sweet and whimsical comedy which gives us a number of odd and quirky moments to be savored while also quite sensitive and thoughtful about its subjects. As we often get tickled by its numerous offbeat moments, the movie makes some sharp points on its various story elements including social trust, and you may come to reflect on them for a while after its open-ended final shot.

The movie is basically a series of short comic vignettes, and the first one is about a very embarrassing situation surrounding a certain salacious X-ray photograph which happened to be shot in the X-ray room of some private hospital located somewhere in Seoul. When that X-ray photograph in question is shown to everyone in the hospital later, everyone wonders about the identity of the two figures shown in that X-ray photograph, and Yoon-yeong (Lee Joo-young), one of the nurses working in the hospital, becomes nervous because she and her boyfriend Seong-won (Koo Gyo-hwan) recently had sex in the X-ray room. Although many other hospital staff members have often had their carnal fun in the X-ray room, she cannot help but suspect that she and her boyfriend were photographed at that time, and we get a small hilarious moment when they look closer at that X-ray photograph for getting any detail to confirm their suspicion.

Still feeling uncertain and nervous, Yoon-yeong comes to consider quitting her job, especially after her private conversation with Kyeong-jin (Moon So-ri), who is one of the doctors working in the hospital. Kyeong-jin seems to be suspecting that Yoon-yeong is involved with that X-ray photograph, and she suggests that Yoon-yeong should take some vacation for a few days, but then Yoon-yeong only becomes quite determined to keep her face straight and then go through what is supposed to be her last day at the hospital. 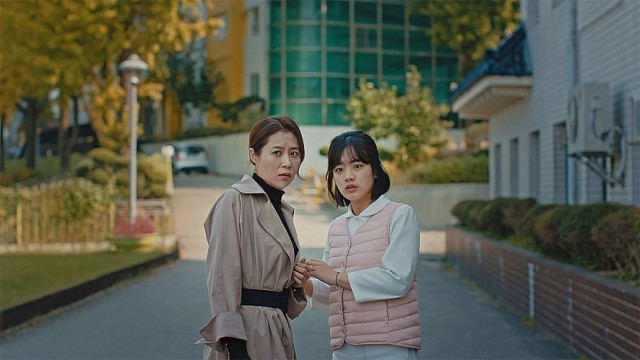 However, a weird thing happens on that day. When Yoon-yeong comes to the hospital in the morning, all of the hospital staff members except Kyeong-jin are not in the hospital, and they all turn out to have each own reason for taking a day off. While Yoon-yeong accepts this rather strange circumstance without much doubt, Kyeong-jin, who is more seasoned and cynical compared to Yoon-yeong, suspects that their colleagues are having a day off with false excuse, so they decide to check two hospital employees randomly chosen from the list of the hospital staff members. I will not go into details on what happens next, but I can tell you instead that there are several nice comic moments including a sudden unexpected scene where Yoon-yeong and Kyeong-jin has to deal with a matter of trust and doubt, and you will surely get good laughs from them.

The movie later takes a weirder turn as finally presenting its titular entity on the screen, which is a pet catfish belonging to one of hospital patients and also functions as the narrator of the film (Chun Woo-hee, who was unforgettable in “Han Gong-ju” (2013), is effective in her deadpan narration). Not long after it gets agitated without any apparent reason, Seoul is suddenly struck by a number of unlikely sinkhole incidents, and Seong-won, who has been unemployed for a while, is delighted to get employed as one of the laborers to work on those sinkholes.

When he and his two colleagues are about to leave their workplace as usual on one day, Seong-won belatedly discovers that he has lost a small ring his girlfriend gave him some time ago, so he and his colleagues try to find that ring for a while, but they still cannot find it, and then he comes to suspect one of his two colleagues when he notices something from that guy later. Although this segment lags a bit as eventually arriving at its expected punch line moment, the movie keeps maintaining its spirited sense of humor, and I particularly like a farcical long-take shot smoothly going around a sinkhole site which Seong-won and his two colleagues are working on during one night.

In the meantime, Yoon-yeong becomes quite uncertain about her relationship with Seong-won after she noticed his missing ring, and then she comes to distrust him more after a small incident involved with a very steep stair. As their relationship accordingly becomes strained, Yoon-yeong seeks some advice from Kyeong-jin, and then she makes a certain decision, but then she is not so sure about whether she made a right decision or not.

Steadily baffling and tickling us with these and many other whimsical moments, the movie, which is the latest work commissioned by National Human Rights Commission of Korea, tactfully delivers its social messages on trust and doubt, and director/co-writer/co-editor/co-producer Yi Ok-seop competently handles the story and characters while also drawing the excellent comic performances from her three main cast members. While Lee Joo-yong, who previously appeared in “Jane” (2016), is plucky and charming, Moon So-ri, who already showed her considerable comic talent in her directorial debut film “The Running Actress” (2017), has several juicy comic moments to be appreciated, and Koo Gyo-hwan, who also worked with Yi as her co-writer/co-editor/co-producer, shows another side of his talent which is quite different from his memorable transgender character in “Jane”.

Overall, “Maggie” is funny and engaging for its distinctive mix of offbeat comedy and social messages, and I enjoyed its colorful mood and details a lot during my viewing. In short, Yi gives us an entertaining debut feature film which is also another notable South Korean film of this year, and it will be interesting to see what will come next from her during next several years.