Indian film “Shoot the Piano Player”, which was recently released in South Korea as “The Blind Melody”, is a ridiculously funny black comedy thriller packed with some good laughs and wild twists. Although it is uneven and incoherent at times as trying too many things during its 138-running time, the movie often amused and tickled me in good ways, and I found myself gladly ignoring its several weak aspects such as broad characterization and frequent plot contrivance.

After the brief prologue scene which looks like the Indian version of Peter Rabbit (Yes, they do have rabbits down there in India), we are introduced to a young pianist named Akash (Ayushmann Khurrana), who, according to him, has been blind since he was hit by a cricket ball in his eyes at the age of 14. He has aspired for a successful musician career in Europe, but, despite his considerable talent, he has been so far stuck in his urban neighborhood without much progress while leading a rather lonely life at his shabby residence along with a cute little kitten, who, to be frank with you, drew my attention everytime it appeared on the screen.

And then there comes a substantial change into his life. During one afternoon, he happens to encounter a young woman named Sophie (Radhika Apte) in a downtown area, and she takes him to a restaurant run by her father, who happens to need a piano player to play music for his customers. Although there is only one piano in the restaurant as far as I could see, a series of your average Bollywood songs are loudly played on the soundtrack whenever Akash plays the piano on the screen, and I could not help but notice this aural discrepancy during my viewing, but you may not mind this at all as watching those restaurant customers joyously dancing near him.

Meanwhile, Sophie and Akash come to feel attracted to each other, and it does not take much time for them to follow their romantic urge, but there is one problem. As already shown to us, Akash has actually pretended to be blind just because, as he confides at one point later in the film, he thinks this pretension of his will help focus more on honing his musical talent, and we accordingly get an amusing moment as he steadily maintains his disguise in front of Sophie when she visits his residence.

And then there comes a far bigger trouble to Akash after he happens to be hired by Pramod Sinha (Anil Dhawan), a rich real estate businessman who was once a very popular Bollywood star in the past. Pramod is eager to surprise his young wife Simi (Tabu) for their upcoming wedding anniversary, but it is clear that Simi is more occupied with her future acting career, which seems to be the main reason why she married Pramod.

When Akash subsequently arrives at Pramod’s posh apartment as requested, he is greeted by Simi instead of Pramod, and it soon becomes apparent to Akash that something quite serious happened in the apartment. What follows after that point is a morbidly funny scene where Simi and the certain other main character desperately try to fool Akash, and Ayushmann Khurrana thoroughly sticks to his straight attitude, which reminds me again that looking as serious as possible in front of absurdities is usually the best way for getting laughs from us.

Once he manages to get out of Pramod’s residence as keeping his disguise intact, Akash tries to get help, but, of course, there is no one to help him, and the situation becomes quite riskier than expected as Simi and her accomplice become more determined to get rid of any possibility of their serious crime exposed in public. As a result, we get a number of darkly humorous moments, and I particularly like a brief but nasty scene involved an old lady living near Pramod’s residence.

The mood becomes darker as Akash becomes a lot more helpless than before, but the movie keeps maintaining its sense of humor as cheerfully doling out several plot turns, and we even get a wry song about kidney after our hero goes through another perilous moment. Although it trudges a bit during the finale which is not entirely successful for getting a little too serious, the story briskly moves from one narrative point to another on the whole, and the overall result feels relatively leaner compared to some other Bollywood flicks I saw during recent years.

Although the main characters in the film are more or less than simple caricature figures we usually observe from the distance, Khurrana and several other main cast members in the film play their respective roles with considerable gusto. While Khurrana ably goes back and forth between comedy and drama, Tabu is effectively droll in her femme fatale role, and she is especially good when her character has to think and act fast for herself during the climactic part of the film. In contrast, Radhika Apte is unfortunately stuck in her under-developed role, and it is a shame that she does not have much to do compared to Anil Dhawan and other more colorful supporting performers in the film.

In conclusion, “Shoot the Piano Player”, which should not be confused with François Truffaut’s “Shoot the Pianist” (1960) at any chance, is a solid entertainment which provides enough laughs and thrills for its audiences, and I appreciate the game efforts from director/co-writer Sriram Raghavan and his cast and crew members. It could push its story and characters harder for more twisted laughs, but I constantly chuckled during my viewing at least, and I think you will not be disappointed if you are looking for a crowd-pleasing product with distinctive local flavor. 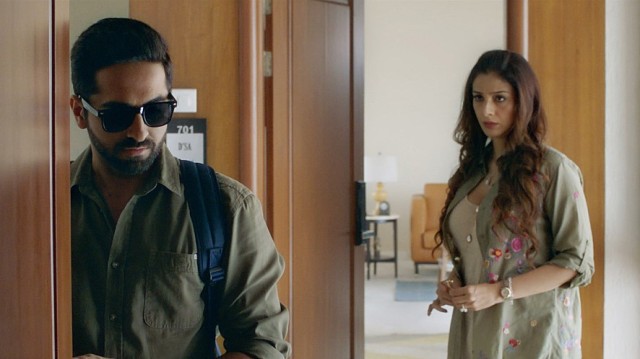