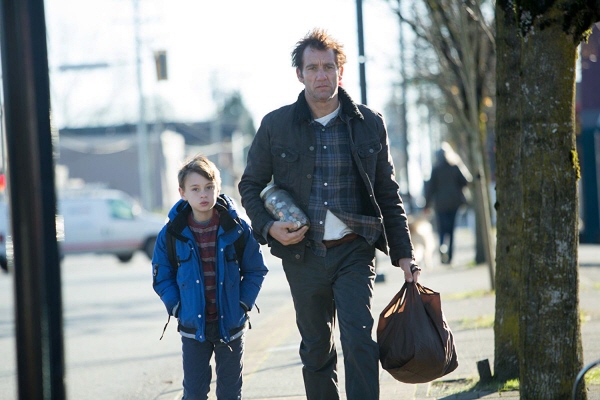 “The Confirmation” is more entertaining and touching than I thought at first. While its overall mood is dry and glum just like its hero, the movie gradually reveals its sweet and humorous side as moving from one small good moment to another, and then we are moved as observing the small but significant changes in the relationship between its hero and his young but precocious son.

When we meet Walt (Clive Owen) at the beginning, he does not look like someone you can rely on. While struggling with alcoholism, he has been in a bad financial situation, and now he has to take care of his young son Anthony (Jaeden Lieberher) during a weekend in the absence of his ex-wife Bonnie (Maria Bello), who is going to take some personal trip along with her new husband Kyle (Matthew Modine). Because their son will have his communion and confirmation at her Catholic church around the next week, Bonnie is naturally a bit concerned, but Walter assures to her that he has been sober during recent years, and she trusts his words despite some reservation.

While not particularly enthusiastic about spending the weekend with his father, Anthony often looks at Walt with some concern because, as shown to us later in the story, this smart little kid knows well about his father’s drinking problem. When his father later goes to a local bar for meeting some guys, he initially waits inside his father’s truck while reading a book, but he eventually goes inside the bar some time later, and we get a subtly awkward moment when he spots his father in the middle of some conversation with a glass in his hand.

When Walt and his son subsequently leave the bar, Walt discovers that the precious toolbox in his truck gets stolen by someone, and that is a big problem because he really needs that toolbox for a job he will start to do on next Monday. Furthermore, his truck happens to have some engine problem, and then he finds himself evicted from his current residence as he has failed to pay his rent due to his difficult monetary situation.

While certainly frustrated with this bad circumstance, Walt tries to deal with his problems as much as he can. After managing to take out several things from his residence with his son’s help, he goes to his ex-wife’s residence along with his son, and then they look for any possible way to solve his trouble. Walt’s old friend Otto (Robert Forster) is certainly willing to help him, but there is not much he can do for Walt, so Walt begins to search for any information about his stolen toolbox, which is probably put in pawn for money already.

After meeting a guy named Vaughn (Tim Blake Nelson), Walt and Anthony go to some other guy who can probably help them. It is quite apparent that Drake (Patton Oswalt) is not a very reliable guy to say the least, but Walt has no choice because he is desperate for any information which may help him retrieving his toolbox.

While surely reminiscent of many other similar films such as “The Bicycle Thief” (1948) or “A Better Life” (2011), the movie steadily builds up its story and characters through a series of nice moments balanced well between comedy and drama, and some of the most amusing moments in the film come from Anthony’s innocently serious religious faith. Although he is quite passionate about science, he has also accepted the existence of God without much doubt, and there is a funny and intimate moment when Walt gives his son a wise and thoughtful advice on what to choose to believe for oneself. As going through a number of rather eventful moments with his father, Anthony comes to learn a bit about how complicated life is, and he later finds himself breaking some of the Ten Commandments as trying to do the right things.

The two main performers of the film effortlessly complement each other on the screen. Clive Owen, who is no stranger to playing glum characters, is dependable as usual, and he is particularly good when he subtly conveys his character’s growing desperation without any trace of exaggeration. Jaeden Lieberher, who drew our attention for the first time with his memorable performance in Jeff Nichols’ “Midnight Special” (2016) and then moved onto “It” (2017) and “It Chapter Two” (2019), is equally wonderful in his unadorned performance, and he and Owen are believable in how their characters get closer to each other bit by bit along the story.

Director/writer Bob Nelson also assembles a bunch of reliable performers around Owen and Lieberher, and each of them has each own moment as bringing life and personality to their respective supporting roles. Robert Forster, Tim Blake Nelson, Stephen Tobolowsky, and Patton Oswalt are fun to watch as usual, and I particularly enjoyed Oswalt’s performance, which is alternatively silly and pathetic as required. In case of Maria Bello and Matthew Modine, they are rather under-utilized in comparison, but Bello has a little but crucial dramatic scene with Liberher around the end of the film, and she and Liberher deftly handle the humor and poignancy of their scene.

Overall, “The Confirmation” is a modest but solid character comedy drama to be appreciated for its considerate storytelling and a number of good performances, and I was surprised to find myself more emotionally involved in its story and characters than expected during my viewing. It may be a little too predictable, but it did its job as well as intended, and that is enough for me. 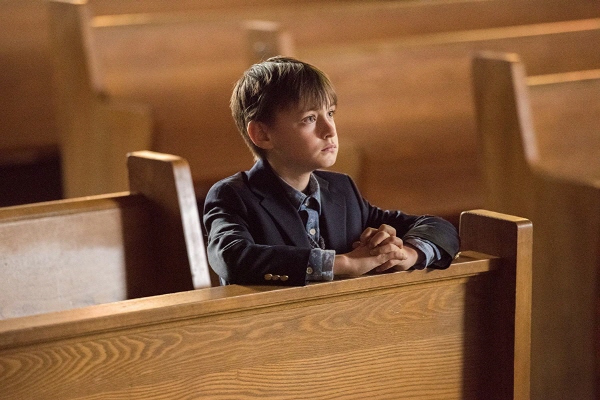 This entry was posted in Movies and tagged Alcoholism, Catholicism, Father and son, Religion. Bookmark the permalink.