“Angel of Mine” is a disturbing maternal thriller which constantly unnerves us through a number of dark, intense moments of grief and obsession. Although there are several deficient spots including its rather contrived finale, the movie mostly works thanks to another compelling performance from its very talented lead performer, and you will often brace yourself as watching its troubled heroine driven further into her emotional darkness step by step.

When we see Lizzie (Noomi Rapace) at the beginning of the story, we instantly sense that something is not quite right about her, and the movie gradually reveals to us how problematic her life has been. While she has managed to work at a local cosmetic shop day by day, she has been letting herself isolated from others including her ex-husband and their son, and we are not so surprised to see her having another session with her therapist later in the story.

As we wonder what happened to Lizzie in the past, the movie slowly begins to dial up the level of tension when she happens to come across a little young girl at a party for one of her son’s friends. For some reason, Lizzie finds herself becoming quite fixated on that girl, and we soon see her approaching to that girl and her mother Claire (Yvonne Strahovski), who warmly welcomes Lizzie into her house when Lizzie shows a fake interest in buying it.

In the meantime, things get worse for Lizzie, and, no matter how much she tries to keep things under control, the people around her begin to sense her increasingly troubled status. Her son becomes more uncomfortable to be at her house especially after witnessing that she is still not fully recovered from the loss of her daughter, and her ex-husband as well as her parents are also quite concerned about her when it seems to them that she really needs medical help more than ever.

Steadily maintaining its nervous mood surrounding Lizzie, the movie lets us understand and emphasize with her increasingly agitated state mind even though we mostly observe her from the distance. While she may be well aware of how she is seriously obsessed with Claire’s daughter, Lizzie cannot help herself as behaving more like a stalker, and it is really disturbing to see when she tries to have a little private time with Claire’s daughter at one point despite the warning from Claire, who belatedly comes to learn more about Lizzie and understandably becomes quite determined to protect her daughter by any means necessary.

The screenplay by Luke Davies and David Regal, which is based on French film “Mark of an Angel“ (2008), stumbles at times during its last act, and I was a bit disappointed to see that the movie chooses to end the story in a way a little too easy and convenient considering what has been tensely developed up to that point. At least, the movie still holds our attention thanks to director Kim Farrant’s competent direction, and we keep dreading what may eventually happen between Lizzie and Claire. 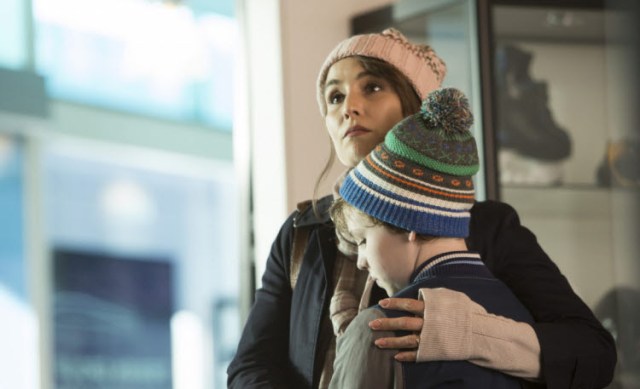 In addition, the movie is anchored well by the solid lead performance from Noomi Rapace, a wonderful Swedish actress who has advanced a lot since her memorable breakthrough performance in “The Girl with the Dragon Tattoo” (2009) and its following two sequels. While never hesitating to throw herself into several tough moments of raw emotions in the film, Rapace demonstrates again that she is capable of sheer emotional intensity like, say, Jennifer Jason Leigh, and she is terrific during one particular scene where her character desperately tries to explain and justify her growing obsession in front of others.

In case of a few other main cast members surrounding Rapace, they fill their thankless supporting roles as much as possible. While Luke Evans and Richard Roxburgh do not have many things to do as being stuck with their rather underdeveloped characters, Yvonne Strahovski, who recently became more notable thanks to her Emmy-nominated supporting turn in acclaimed TV series “The Handmaid’s Tale”, is effective as a counterpoint to Rapace, and young performers Finn Little and Annika Whiteley are also fine as holding their own little place well around Rapace and Strahovski.

While not entirely without flaws, “Angel of Mine” is a fairly engaging thriller film mainly because of Rapace’s strong lead performance. Considering that I still do not like its ending much, maybe I should give it 2.5 stars, but Rapace’s good acting here in the film is worthwhile to watch while also deserving an extra half-star in my inconsequential opinion, so I recommend it to you with some reservation.

This entry was posted in Movies and tagged Mother, Thriller. Bookmark the permalink.