British documentary film “Nothing Like a Dame”, which was released in US as “Tea with the Dames” in last year, simply observes whatever is being generated among four old British actresses who have been well-known for their respective acting careers full of numerous distinguished moments. That may not look that interesting to some of you, but I assure you that it is undeniably fun to watch them talking about their small and big experiences with considerable wit and humor, and you will probably come to want more of them at the end of the documentary.

The setting of the documentary is pretty simple to say the least. Director Roger Michell, who has been known for several notable films such as “Notting Hill” (1999) and “Venus” (2006), had these four actresses gather at a small but lovely country cottage, and then he just let them talk together about anything in front of the camera while occasionally throwing a question to them.

As some of the most prominent figures in the British theater and cinema, these four actresses certainly have lots of things to talk about. While Judi Dench, who drew our attention for the first time for her recurring supporting role in the several recent James Bond movies and then advanced further despite being over 60, and Maggie Smith, who became more familiar to young audiences thanks to her appearances in the Harry Potter movies and TV series “Downton Abbey”, are delightful as usual, the same thing can be said about Joan Plowright, who has done far more than being Laurence Olivier’s second wife, and Eileen Atkins, whom I fondly remember for her supporting performances in “The Dresser” (1983) and “Gosford Park” (2001).

In the beginning, they talk about their respective early years. Dench reminisces about how nervous she was as a young newcomer pressured by her stage director, and I must say it is rather surprising for us to see young Dench via a series of archival footage clips showing her theater performances. After all, like Maggie Smith, she has frequently played old British ladies during last two decades, and you may marvel at how pretty and radiant she was during her early career years.

Smith and Atkins also had each own difficult experience around the same time. Atkins’ parents expected her to become a dancer, but she eventually became more interested in acting after several years of frustration, and she later got more confident when her acting teacher said about how beautiful she was in an unconventional way. In case of Smith, she quickly rose to stardom during the 1960s while also winning an Oscar for “The Prime of Miss Jean Brodie” (1969), but she tells us that she was often agitated about working with Olivier due to his supreme status in the British theater and cinema, though Olivier was also nervous about sharing the screen or stage with her. At one point, Smith reminisces about when Olivier acted a bit too harshly to her while they were performing Othello and Desdemona on the stage: “It was the only time I saw stars at the National Theatre.”

Plowright, who married Olivier shortly after playing along with him in “The Entertainer” (1960), surely remembers a lot about her legendary husband like her three friends. Although she was merely a young newcomer when she agreed to appear in “The Entertainer”, she gradually built up her own acting career in addition to raising her children, and she and Olivier were happy and content together for a long time until his eventual death in 1989.

After that point, the documentary freely flows along with its four ladies amidst many different topics. Besides an obligatory part on acting in movies, there is an amusing scene where they recollect why they were all reluctant to play Cleopatra, and then we listen to each of them talking about how it was for them to work with their respective spouses, and then there is an humorous moment when they frankly talk about becoming Dames for their distinguished longtime service to the British theater and cinema.

In the end, their conversation eventually culminates to their approaching mortality. The mood becomes a little melancholic, but our four ladies do not lose any of their wit and humor at all while often poking fun at each other, and, like many of their fellow troupers, they are determined to keep going on as much as they can. As many of you know, Dench’s eyesight has been seriously deteriorated during recent years, but she is not daunted by that much while she has to cope with that everyday. Although she has been far less active than before, Plowright is also willing to go on as usual, and so are Atkins and Smith. 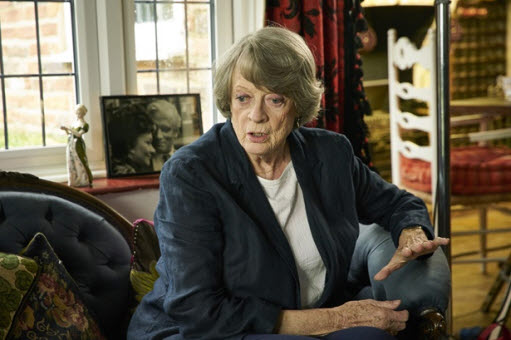 While rarely interrupting the flow of the conversation among his four ladies, Michell and his crew members actively interact with them from time to time, and that is another source of amusement. Although I wish he threw some hard questions, but that is just a minor complaint from me, and I will not deny that I often smiled and chuckled during my viewing.

In conclusion, “Nothing Like a Dame” is as witty and amiable as you can expect, and its rather short running time (84 minutes) will briskly pass by once you go along with their engaging interactions on the screen. While I think it could be a bit more coherent and focused, it is still a fairly enjoyable documentary which also works as a loving presentation of the humanity and personality of Dench, Smith, Plowright, and Atkins, and you should definitely check it out if you have admired their respective acting careers as much as I have.

This entry was posted in Movies and tagged Actress, Documentary. Bookmark the permalink.