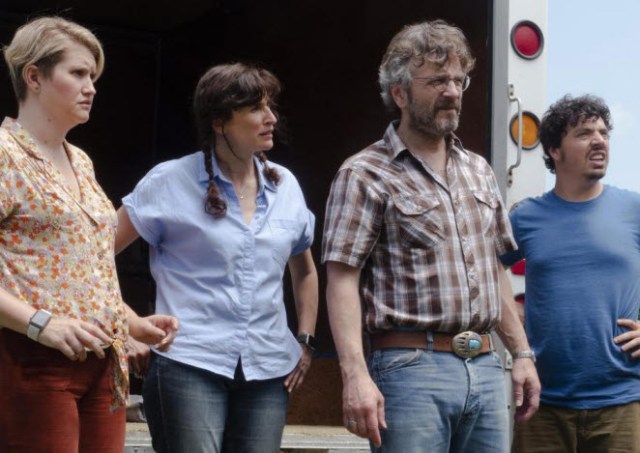 Lynn Shelton’s latest work “Sword of Trust” is a little whimsical comedy film which could be better if it trusted its four likable main characters a bit more. While they are basically broad archetypes, they feel like real characters full of life and personality nonetheless mainly thanks to the good performers behind them, and it is rather disappointing to see that the movie later thrusts them into contrived silly scenes which are occasionally funny but do not wholly work in my humble opinion.

The first act of the movie mainly revolves a shabby pawn shop located somewhere in Birmingham, Alabama, and we get the first amusing moment in the film as Mel (Marc Maron), the owner of the pawn shop, tries to deal with some guy attempting to sell a tacky guitar and a pair of used boots. As they comically push and pull each other for a while, Mel’s goofy young assistant Nathaniel (Jon Bass) pays more attention to a YouTube clip on some loony conspiracy theory, and we are not so surprised when it is revealed later in the story that he actually believes that the Earth is flat.

The other two main characters of the film are Mary (Michaela Watkins) and Cynthia (Jillian Bell), a lesbian couple who come to Mel’s pawn shop on one day for selling an antique sword Cynthia inherited from her recently diseased grandfather. According to her grandfather’s rambling letter and a very questionable certification accompanying the letter, the sword was an important relic proving the victory of the Confederate Army in the American Civil War, and Mary and Cynthia want to sell it at a high price although they do not believe at all whatever Cynthia’s grandfather believed in his foggy mind deteriorated by Alzheimer’s disease.

Mel is not so eager to buy the sword at first, but then he changes his mind when Nathaniel informs to him that there are many people who really believe that the Confederate Army won the Civil War and that ‘historical fact’ has been somehow wiped out from history books and lessons (Wait, isn’t history always written by the winners?). Once discerning that some of those crackpots are willing to pay a lot for whatever will prove their crazy and pathetic conspiracy theory, Mel becomes more active in his subsequent dealing with Mary and Cynthia, but it does not take much time for Mary and Cynthia to see that Mel is trying to fool them, and Mel and they eventually agree to sell the sword together to a shady group represented by a guy named Hog Jaws (Toby Huss).

Meanwhile, we get to know a bit more about Mel via the appearance of his ex-girlfriend Deirdre, who is incidentally played by Shelton. At first, she simply looks like a mere customer trying to sell her supposedly precious ring, but we gradually come to sense the awkward mood generated between her and Mel, and Shelton and Marc Maron skillfully handle this wonderful personal moment as subtly suggesting a long history between their characters via small nuances and gestures.

Around the middle of the story, our four main characters find themselves confined within a vehicle taking them to somewhere in Tennessee, and that is the movie becomes more interesting to watch. As Mary and Cynthia confide to Mel and Nathaniel on how they came to postpone having a child while pursuing their respective aspirations, they come to show more of themselves to Mel and Nathaniel as well as us, and Michaela Watkins and Jillian Bell are spontaneous as touchingly presenting their characters’ loving relationship.

Mel also has lots of things to talk about besides how he happened to hire Nathaniel some time ago, and Maron, who has been mainly known for his supporting role in TV series “Glow”, ably holds our attention as revealing more human depth of his character. The camera merely focuses on his face, but his face tells us as much about his character as the accompanying long monologue on his character’s wild life in the past, and we come to reflect more on the previous scene between his character and Deirdre.

Around the time the screenplay by Shelton and her co-writer Mike O’Brien enters the last act unfolded in a place where its four main characters encounter a bunch of potentially dangerous people, the movie begins to spin its wheels as trying to be funny a little too much. A deliberately wacky scene where Mel and Mary attempt to deal with a guy who seems to be quite ready to pay a lot for the sword right now goes on a bit overlong, and the same thing can be said about the subsequent scene unfolded among them and some other characters in the story. Although the performers are clearly having a fun together during these scenes, I found myself becoming impatient in the end despite some amusement (I was particularly tickled by the silly confusion involved with the name of a battlefield associated with the sword), and I accordingly felt a growing urge to bring some common sense into their characters’ heads.

Overall, “Sword of Trust” is not satisfying enough for me to recommend mainly due to its weak last act, but it is mildly entertaining at least, and I do appreciate those several nice moments delivered well by Shelton and her talented cast members. It is a shame that they did not add up to something funnier, but I will not deny that I was amused to some degree during my viewing. 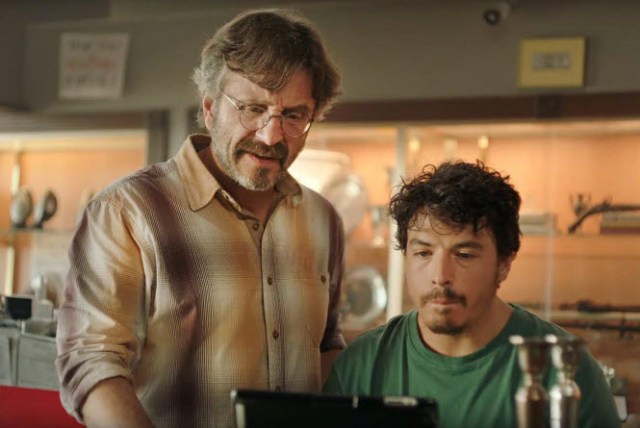 This entry was posted in Movies and tagged Comedy, Pawn shop, Sword. Bookmark the permalink.