Gus Van Sant’s latest film “Don’t Worry, He Won’t Get Far on Foot”, which is released as “Don’t Worry” here in South Korea, is a rather mild feel-good drama about alcoholism and disability. While surely giving us some darkly humorous moments as expected from its subjects and its real-life artist hero who hit the bottom more than once before eventually moving up to sobriety, the movie often feels a bit too thin and superficial in terms of storytelling and characterization, and I am particularly disappointed because it does not present well the creative process behind its hero’s simple but edgy cartoon works, which can be amusing or offensive depending on your individual viewpoint.

At the beginning, the movie moves around several different time points in the life of John Callahan (Joaquin Phoenix), whose life in Portland, Oregon was irreversibly changed on one day in 1972. During a private meeting with his fellow Alcoholic Anonymous (AA) members, he frankly recollects how he began that day with another bottle of booze – and how he subsequently threw himself into more alcohol during an evening party to which he went along with two female friends.

At that party, Callahan came across a guy named Dexter (Jack Black), who was drunk as much as him and later suggested that they go to some other party. Although both of them were pretty inebriated around the time they left for that party, Callahan did not prevent from Dexter driving his little vehicle, and they also drank more as stopping by several spots. Not so surprisingly, a big car accident eventually happened, and, while Dexter managed not to get injured much, Callahan found himself becoming a paraplegic when he regained his consciousness some time later.

That could have been a moment leading to rehabilitation, but, once he got out of the hospital, Callahan let himself tumbled further into his addiction. He kept drinking as usual even though he could not use his hands well, and he often exasperated his caregiver although he provided Callahan alcohol without objection while doing his job without much complain.

During the scenes showing Callahan attending his AA meeting, we get to know a bit about his personal issue. As growing up as an adopted kid, he was often bitter about being abandoned by his biological mother, and he still feels bad about that fact even at present, but his fellow AA members see through his self-pity while sharply pointing out that he is a drunk because he drinks, and that is one of more effective moments in the film.

As he gradually takes a number of steps for recovery and sobriety later, Callahan is helped a lot by his sponsor Donnie Green (Johan Hill), the de factor leader of his AA meeting who is also your typical trust-fund kid. Green often holds his AA meeting in his luxurious residence, and we observe his positive influence on his fellow AA members, who come to feel comfortable enough to be honest and sincere in front of others under a calm, insulating private environment provided by Green.

While making progress step by step, Callahan comes to develop the artistic potential inside him, and we soon see him getting more attention as his several cartoons are shown to others via a local newspaper. Many of his cartoons, including the one which inspired the name of his memoir on which the movie is based, are pretty funny, but some of them are not very politically correct to say the least, and the movie does not neglect the fact that Callahan’s works often received negative responses for good reasons.

Anyway, as concentrating more on his newfound profession, Callahan finds himself getting much better than before. As a part of his recovery, he makes amends to a number of people who deserve his sincere apology, and we get a moment of understated poignancy when Callahan meets Dexter again, who has been struggling with his guilt and alcoholism just like Callahan. 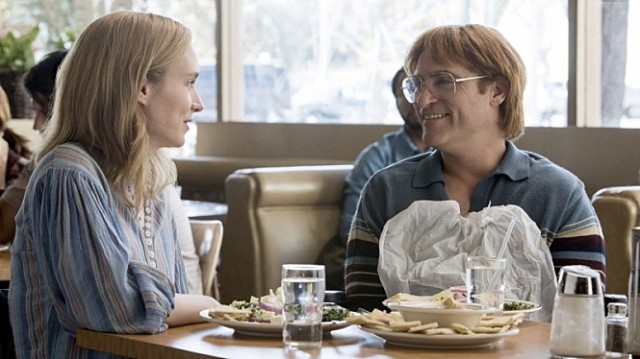 However, despite these and other good moments, the screenplay by Van Sant, which is based on the story by him and three other writers including Callahan, sometimes loses its narrative focus due to its unnecessary non-linear storytelling approach, and it also feels flat in case of the depiction of Callahan’s artistic activities. Sure, we get a number of his works being drawn on the screen, but that is all for us, and we do not get much insight on the sardonic inspiration behind these works of his.

The main cast members are suitably cast in their respective roles. Although he looks a little too old to play Callahan during the 1970-80s, Joaquin Phoenix did a good job of conveying his character’s constant struggle with personal demons, but I must say that the best performance in the film comes from Jonah Hill, whose low-key acting demonstrates again the other side of his talent behind his familiar comic image. While Udo Kier, Beth Ditto, and Jack Black are also fine in their respective supporting roles, Rooney Mara and Carrie Brownstein are woefully under-utilized in comparison, and I was particularly dissatisfied as watching Mara stuck with playing a character no more than your average pixie dream girl. In fact, I would not be surprised if her character turned out to be a mere fragment of Callahan’s imagination.

On the whole, “Don’t Worry, He Won’t Far on Foot” is not a total waste of time thanks to its several good elements, but it looks rather inconsequent compared to “American Splendor” (2003), a criminally overlooked film which did a far better job of presenting its similar subjects in my humble opinion. Maybe because of how much I was impressed and delighted by that movie when I finally came to watch it early in this year, I am not so willing to recommend “Don’t Worry, He Won’t Far on Foot” for now, but you may like it more than I did if you are ready to overlook its inherent flaws.